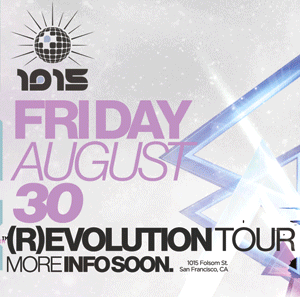 One of the most celebrated and most recognized names in electronic music, German producer Paul van Dyk, continues his (R)Evolution tour, a worldwide venture that brings him to San Francisco’s 1015 Folsom next Friday. The tour shares its name with the 18-track remix compilation that dropped back in February this year, which in turn served as a celebration of his massive 2012 success: the collaborative Evolution album. Off the veteran’s own VANDIT imprint, the roster for (R)Evolution runs deep, spanning Kyau & Albert’s metallic rework of “Open My Eyes” to John O’Callaghan’s 140 BPM remix of “I Don’t Deserve You”.

If you’d like to experience the master at work, here’s your chance. Enter below to win two tickets for Paul van Dyk’s show next Friday at 1015 Folsom in San Francisco. There, he will be spinning a mind-blowing set in the 4-stage venue, with support from Taj, Vahid, and local favorites. On top of this, the prize pack will include a signed CD and a few other surprises. (reload the page if you can't see the contest)

In further news, last Monday saw Paul van Dyk release his new single with Christian Burns, “We Are Tonight”, which also included a remix by one of Australia's brightest rising stars and producer of January's hit "Intropial", Walden.  The original stands on the progressive side of the spectrum, this time full of crisper vocals, a four-on-the-floor rhythm, and slower BPM. Additionally, this single will be included on Politics Of Dancing 3, Paul van Dyk's forthcoming album set to hit stores in late fall. Buy the collboration here today, and we hope to see you next Friday for the (R)Evolution.