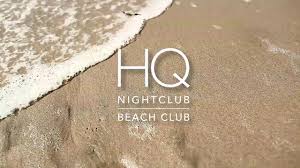 This weekend Earmilk ventured out to one of the East Coast's newest, and hottest spots for great dance music at Atlantic City resort, Revel. One year ago the resort opened the door's to nightclub HQ that has since hosted such names as Tommy Trash, Eric Prydz, and Tiesto- only to name a few.  With the Jersey Shore having endured a tough winter after the devastation caused by Hurricane Sandy, Revel resorts is back in action and going strong having recently introduced the HQ Beach Club. The club is backed by Angel Management Group and EMM Group, which are known for bringing in A-List talent to clubs all over the country.

This 4th of July weekend Revel brought the likes of Afrojack, Morgan Page, Tyler Sherrit, Dirty South to the shore-side venue. We were lucky enough to check out the beach club and nightclub this past Saturday where we watched Robbie Rivera bring his famous Juicy Beach show to the Jersey Shore beach club, and later that night Sultan & Ned Shepard had the nightclub dancing straight through the early morning hours. Robbie Rivera took to the deck at the packed beach club just shortly after 3:00pm. The legendary DJ and producer did what he does best as he excited the crowd with a wide variety of musical genres intermixed with his original productions. Throughout the course of his set Rivera played summer hit "I Love It" by Icona Pop, and had the crowd singing along to his cover of Alphaville's "Forever Young." Rivera never disappoints and his debut show at the beach club was made for an overall great day, with great weather and great music.

Later that night we had a chance to catch up with Canadian Electronic music duo, Sultan + Ned Shepard before they went on to play a high-energy set at the HQ Nightclub. Up and comer Tyler Sherritt played a strong opening set and at 1:00am Sultan and Ned entered the club and were ready to take over. These guys are no strangers to playing the Atlantic City hotspot, as they confidently took over the decks and interacted with the audience from beginning to end. The crowd went wild when the boys dropped their 2012 hit "Walls." The excitement was at a high point all night especially with Sultan + Ned extending their set an extra hour before heading out to Chicago for Wavefront Festival. The club was packed with dancing fans and the party carried on until the night officially came to an end at 4am. With an impressive list of remixes and original productions already to their name- and a hint on social media that a new track may be on its way- we are excited and look forward to big things to come from these guys in the future!