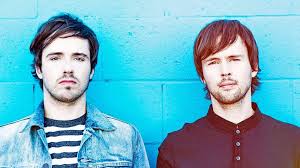 Atlas Genius kicked off their first North American headline tour on April 25th, with a sold-out show at Emo's East in Austin, TX. The run includes sold-out nights in Houston, Santa Barbara, Denver, Minneapolis, Cambridge and New York City, where the Australian band will play The Bowery Ballroom on June 18 and 19.  The band will play London, UK for the first time on May 7, as well. Supporting acts will include TheNeighbourhood, The Postelles, The Colourist, Pacific Air and Haerts. Atlas Genius, who recently wrapped up a sold-out tour with Imagine Dragons, will also perform at numerous festivals, including the Sasquatch! Festival, Lollapalooza, the Firefly Music Festival, Summerfest, Edgefest, San Francisco's BFD and San Diego's X-Fest. See below for tour itinerary.

As a "MTV Artist to Watch," Atlas Genius will be featured across all of MTV's platforms. The band will be putting on a special show from the Studio at Webster Hall on April 30 that will be streamed live on MTV.com. Atlas Genius will then perform it's current single, "If So," on "Late Show with David Letterman" on May 2.

"Centred on You," Atlas Genius' new video, can be viewed now at Refinery 29 here.  It was directed by Anders Rostad. "Trojans," the first single from the band's full-length debut, When It Was Now (Warner Bros. Records), is a Top 5 Modern Rock/Top 10 Triple A radio hit. It has already sold over 250,000 tracks in the U.S. and has spent 49 weeks on Billboard's Alternative Songs chart. "Trojans" has been heard on such shows as "Grey's Anatomy," "Deception," "Whitney," "Being Human" and "90210." The band's new single, "If So," praised by Rolling Stone for its "dream-like guitar licks, shifty hi-hats and a meaty bass backbone, "has been licensed by "90210" and the EA Sports FIFA video game.

Brothers Keith and Michael Jeffery wrote, recorded and produced When It Was Now at a studio they built in their hometown of Adelaide, Australia. "Bouncy, jangly tracks like 'Through the Glass' and the single 'Trojans'...[are] pretty damn irresistible," said People. Seventeen placed them on its list of "17 Bands Everyone Should Be Talking About." Neon Gold said that When It Was Now "promises to be one of the year's most impressive debuts," NYLON tipped Atlas Genius as one of the top five bands to watch out for in 2013 and Entertainment Weekly named them as one of "15 New Stars We Love."

4 - Philadelphia, PA @ The Piazza at Schmidt's w/Family of the Year

**The Postelles and The Colourist

***The Postelles and Haerts