Soulful R&B singer, LOONY recently released a sensational 8-track project titled soft thing. The EP features jazzy, percussive musical captures of her pandemic mindset. At its core, the 25-minute project is a masterful exploration of love in many forms, from the euphoric expectation of flirtation to the inextricable hope for a grandparent to stay safe in the midst of a global pandemic.

If her debut EP JOYRiDE was sardonic, introspective and moody, soft thing is its extroverted, jaunty cousin. Listen to the EP below, and read along to LOONY’s track by track breakdown.

“beg” is the faint whisperings of something new. The conception, the embryo. It’s fearful of things starting to re-awaken, of opening up old wounds, of all the possibilities — how beautiful it could be, or how painful. It’s extremely hesitant, blocking what could be a blessing before it even has a chance to prove itself. And it feels like it’s coming from a deep place beyond your control. It’s learned behaviour, it’s self defence. But if you lean into it, and entertain the possibility of it, it’s one of the most brilliant feelings ever. Making this song was really, really special.

“royal Flush” is where the gamble begins. It’s a whole game now, and it’s fun.There’s flirtation, and no one really has to take anything too seriously so it’s easy for it to be fun. You can still keep your feelings out of it, you’re still protected. But there is the desire for the other person to make the first move, to show their hand, to confirm all the things that you think you’re both feeling. But, it’s almost better that they don’t, until they’re serious. And when they are, it’s like okay, you know where to find me.

“be cool” is when all that goes out the window, though. I can be shy and I can be insecure, but at a certain point I just lose patience with it all. ‘Be cool’ is going and banging on the front door of whoever it is that’s got you feeling so crazy, and asking them if it’s all been in your head or not. And it’s like, okay these feelings have developed for real, this has all gone too far. This song cracks me up, because it manages to be confrontational and also somehow passive-aggressive. You’re super into this person but it’s like ‘relax, don’t feel yourself’ and you’re also spinning it so that if they reject you, or if you make them super uncomfortable with this declaration of love, they’re the weird ones if they now make it weird.

“mine,” luckily, is when you find out that they’ve been feeling the same. And now it’s official, and it feels glorious. Everything just feels really, really good and you want it to keep it that way. Keep it exciting, keep it sexy, keep it curated. You’re still both showing one another your best face, they haven’t really seen any of the rougher edges yet – it’s easy to romanticize one another. You’ve navigating the beginning parts of this – maybe everyone doesn’t really know yet, maybe you’re still trynna keep certain parts of it private, incase it doesn’t go far. You’re trying to push down parts of your shadow, like all the jealous and possessive tendencies that can happen now that there are titles involved. There’s a bit of smoke screen, you’re kinda keeping each-other a bit in the dark, but for now, you like it that way.

And if “mine” is the sensual, hazy, all-encompassing, fantasy-come-to-life type night, “raw” is the sober, sun-drenched, flinchingly bright morning after. You see this person now in the harsh, unforgiving light of day – you’re both completely present and can see completely clear. You can see them for who they really are now, at 360 degrees, and you somehow think they look they’ve best they’ve ever looked. And wait, you actually like it this way the most. This is when the relationship gets real. You’re truly in awe of your partner’s mind, body and soul for what it actually is. Not for what you’ve romanticized it to be, and not only for what they’ve decided to show you. And that unyielding acceptance and admiration is true for how they view you, as well. You’re both now completely naked with one another.

But, as time goes on, issues can start to arise. Boundaries can get hazy, things can become co-dependent. Things can feel symbiotic. This whole beat feels symbiotic, it feels cerebral, like grey matter.. If clear communication isn’t prioritized, things will get worse and you know it. So, you rally against it. This song is really like a pep talk to your significant other. You know if you start cleaning up your acts, nothing is out of reach. Even the moon isn’t far from where you see this going, it’s just gonna take some effort and every obstacle can be overcome. We have every right to be great, so let’s be great. It’s funny, because when I first wrote this song it was about the relationship I have with myself – my higher self talking to my lower self. And it still reads that way, from start to finish. Because it’s a song meant to motivate your other half, in whatever capacity. The fact that I initially wrote it about myself and then it became such a pivotal part of the love story I’m trying to tell stands to signify how much at this point it really is a “we” thing, you’re thinking in terms of “ours” and nothing else.

“either side” fills the space of what should be the heartbreak song on this project. But I really didn’t want there to be a heartbreak song on here. I wanted to keep things warm and loving no matter what. This song sort of skips over the part where your partner decided that maybe things just aren’t working, or maybe they just don’t want to work for it in the same way you do, so they left. Things feel very up in the air, and you’ve gotta be okay with it. If it’s meant to be, it will, and you’ve got this deep belief that they are gonna come back. The sun shines on one half of the world and the other half somehow remains calm, knowing that it’ll come back around. You’re trynna remind yourself of that. You’re also trynna remind yourself of the fact that you’ve been here on Earth a lot longer than you’ve been with them, and you’ve been okay. It’s like singing yourself a lullaby. You’re trynna put some faith in the universe, remember your faith in God. This song is meant to feel like a big old hug because that’s exactly what I want to give to anyone who’s just sitting there, waiting.. The outro of this song is supposed to represent that waiting period.

“faceless” is open-ended. ‘faceless’ is when the story becomes a ‘choose your own ending’. I want you to be able to step into this song no matter what you got going on. No matter how your story went. This song is ‘faceless’, it’s not just for me, it’s for everybody. It’s got a super long intro – I wanted it to represent some period of time passing, before you’re somehow met with them again. Maybe they came to their senses that night and came back to you, maybe it’s years down the line and they’re calling on you for a favour because you have that type of relationship now. Or, maybe it’s you, alone in your house, and they’re crossing your mind and you’re talking to them like they are still around. Maybe you even still feel them around. I think the closer you get with someone, the more you can recognize their energy in any space. In this life and the next, in this life and beyond. The people I love? I’ll be able to recognize them in the dark. Without a physical form, I’ll know they are right there in-front of me. You can just feel stuff like that. Like I feel the sun, like I can feel when it’s morning or night. It’s natural. Some things are just forever. Like, my grandma, she’s forever. Whoever you really love, that’s forever. Some stories don’t always end up going how you want, but if they’re real, they’re forever. It just goes on and on and on. 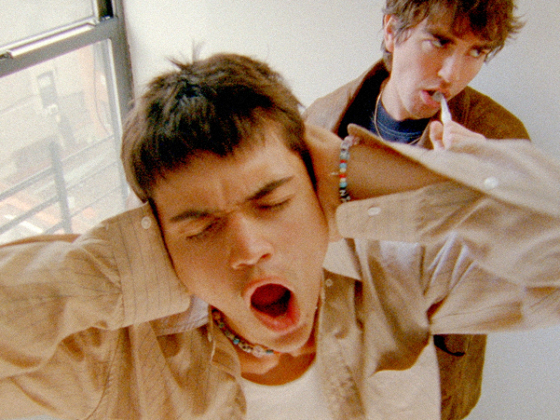