2 years ago by Jack Steindorf

Sacramento, CA - In the heart of California' capital lies a small grass park surrounded by a perimeter of massive green trees. Cesar Chavez Park in downtown Sacramento was the landing spot for an inaugural music festival with some of hip-hop/R&B's most talented stars. Sol Blume was said to be "a place where like-minded individuals can gather to celebrate art, culture, love, social diversity, and good vibes."

The festival opened its gates for the first time at noon on Saturday, April 28th. It had two stages: the slightly smaller Aloha Stage and, to its right, the Ohana Gardens Stage. No two acts would ever perform at once allowing festival-goers the chance to catch the full lineup of amazing artists performing. With its unique alternating stage set up and headlining acts like Jhené Aiko, Goldlink, and The Internet, Sol Blume showed promise from the day it was announced.

It was billed as a boutique festival, and it felt organic but never too small. Alongside attendees from across the nation, Sacramento's diversity came out in force for the lineup of soul and R&B music. For over 10 hours, Sol Blume filled downtown Sacramento with incredible music from acts based throughout the country. The festival was intimate, uplifting, and left a sky-high potential for future growth. The first year was filled with an authentic positivity that radiated from the artists, vendors, volunteers, attendees, and everyone else at the park. Each person was seemingly happy to be a part of something that was special for everyone involved.

Rexx Life Raj was the first vocalist to take the stage. He isn't a "local" act, but the Bay Area singer/rapper immediately set the tone for the rest of the day. His set was one of the most upbeat, and he quickly brought any wanderers to party at the Aloha Stage. The energy was brought out with the performance of his track "Boomin," in which he seemed to enjoy the most. It was evident that there were fans there specifically to see Raj; when the instrumental for "Handheld GPS" dropped, the crowd screamed at each other for the first time of the day. 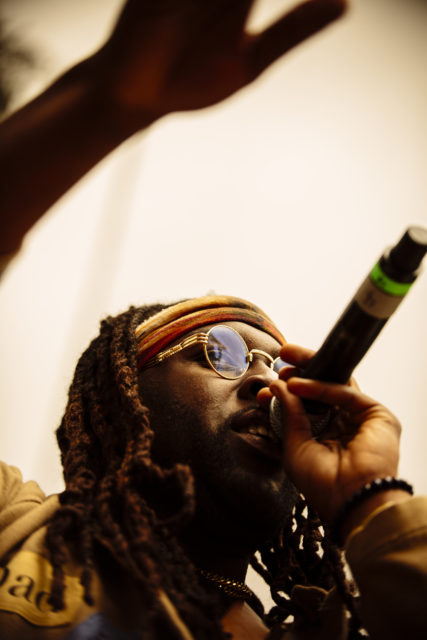 "I was the opening set. Watch where I'm at next year, I will not be the opening set," Raj said with confidence before performing "Fiji" from his Father Figure 2: Flourish album. He ended Sol Blume's first live performance in the crowd to play arguably his biggest song, "Moxie Java."

Next was underrated R&B artist Arin Ray, who was performing at the first festival of his career. He flexed his incredible vocals and shared with the crowd that, when he has spare time, he makes covers of different songs. He began his 30-minute set with a slow vibe but, after a couple songs, he seemed to get more and more comfortable. He loosened up and got into a groove when he played "We Ain't Homies," which he called one of his personal favorites. He worked the stage well for the rest of his set and had remarkable vocals that could have gone acapella. He showed his appreciation for everyone that came out and did all the right things in his first festival appearance.

Singer Berhana was next up. He came out from backstage with a positive energy and brought with him a smooth, head-nodding R&B vibe. As he went through his discography, he stopped to tell the attendees that the next song was a favorite of his. After saying this, he broke into an awesome cover of Cage the Elephant's "Whole Wide World." Berhana's smile was stuck to his face throughout his performance as he radiated a positivity that was already becoming typical of Sol Blume.

As the crowd made a 90-degree shift, Kalin White was the first performer to take the Ohana Gardens Stage. The young singer danced and worked the stage like a veteran. Along with his drummer and keyboardist, he brought a unique Chris Brown-esq R&B vibe to the festival. There was no shortage of high-pitched screams as he hit every dance move, but his passion for his performance was evident to each member of the crowd. While I can't say I'm a huge fan, his mature and upbeat style held its own amongst some of music's most impressive performers.

Xavier Omär was not what I expected; he was much better. His energy was higher and stage presence more prominent than I could have ever imagined.

"I know y'all came to vibe, but who's ready to party?" 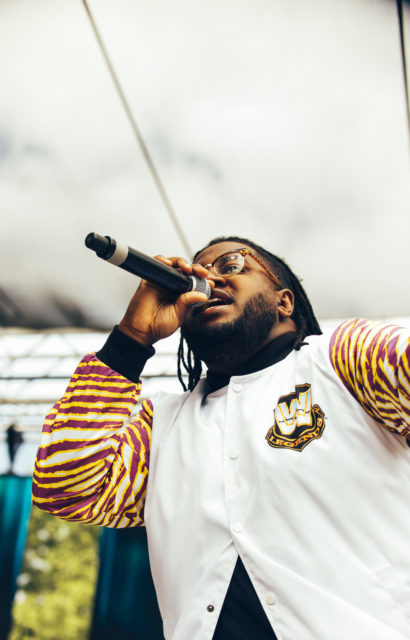 He introduced his band and delivered a performance that had a little bit of everything: there were energetic moments and soothing, more intimate ones. As the "Blind Man" was blasted over the speakers, he said it'd be his last song. Omar then hopped into the photo pit to deliver an emotional performance of his biggest song to date.

For me, Smino was the highlight of Sol Blume. He exploded onto the front of the Ohana Gardens Stage with an intensity second to none. His performance was filled with smiles and plenty of weed smoke in the air. The festival-goers stole his energy and doubled it, screaming the lyrics to many of the songs in his 30-minute set. As the audience drew silent after a song, the sun peeked out from behind the clouds for the first time of the day.

"Make some noise because the sun is out," Smino said to the roaring crowd. 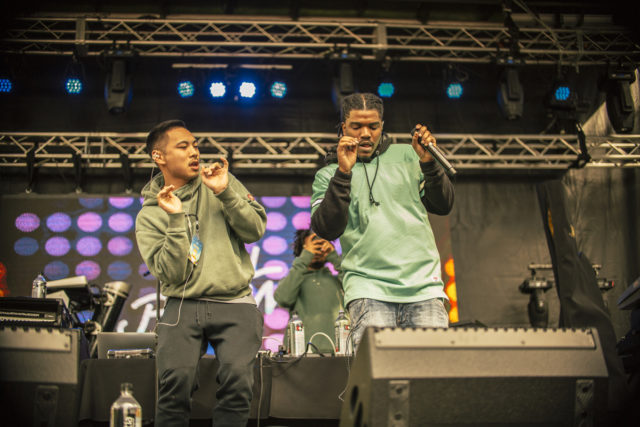 He continued with his performance that at times brought out soft vocals, and at times meaningful, more poignant raps. He performed a song from his upcoming mixtape and continually kept the crowd engaged. To say the St. Louis rapper killed it would be an understatement.

Next up was Nao and, admittedly, I didn't know much about her music. She loosened the crowd up with her positivity but was hypnotizing with her funky R&B style. Her high-pitched vocals lead the way in a performance that was soulful, rich, and authentic. She delivered some of the day's most impressive melodies and shared her bubbly, lovable personality with all of the fans. She announced she was going to put out her first single from her new album in two weeks.

Grammy-nominated rap star Goldlink wasn't supposed to have the next set, but no one was complaining when he stepped out on stage. He made it clear that he was there to party, and the entirety of his set followed that theme. He brought out the excitement in the crowd and hyped up everyone around him. To show that he was there to have a good time and keep everyone involved, he played some of Travis Scott and Kendrick Lamar's biggest hits. After he had performed his Grammy-nominated hit "Crew" and his high-energy set was coming to a close, he posed a question to the thousands of attendees.

And crazy they went.

Continuing to promote the uplifting energy in the park was Noodles' dynamic DJ set. After having just landed in America after an Australian tour with Kehlani, Noodles played plenty of today's hits with, of course, a focus on Bay Area music.

As Sol Blume's second-to-last act came out, the sun began to settle behind the trees and buildings of downtown Sacramento. By the time The Internet hit their second song of the night, "Special Affair," they had found their groove. Each of the band members' faces were overtaken with large smiles, and they continually made the focus on the audience. Singer Syd told the crowd that "Just Sayin" was probably about both of her exes, and she told everyone to scream the lyrics "you fucked up" as if she was each person's ex. In the middle of their impressive performance, guitar player Steve Lacy spit a three-bar freestyle to lighten the mood and entertain the attendees. They played their newest song, "Roll(Burbank Funk)" to a sea of clapping hands. Syd proceeded to promise everyone that a "new album is coming soon." They kept the vibes uplifting and mellow, as they went through cuts off of both of their most recent albums. The Internet made sure that everyone knew that this was their "last show for a minute," but that they were going to continue to drop new music.

"Remember our faces. We're The Internet," were the last words that came from Syd's mouth as they exited the Ohana Gardens Stage.

Jhené Aiko was last - and for good reason. She delivered a performance packed with raw emotion and unmatched passion. She told a story with every song, making every lyric relatable to each pair of eyes fixated on her. Her approach to live music was different than anyone's I have heard before.

"It's not about perfection, it's about connection," she said in the beginning of her hour-long appearance.

She used her captivating stage presence to hold this connection through every minute she was on stage. She preached positivity as she went through her most popular songs; "Bed Peace" and "The Worst" brought yells from the audience. She asked everyone if they were feeling good and, amidst screams, said that was how it's supposed to be. She then broke into her part of Omarion's platinum-selling hit "Post To Be." She hit the home stretch of Sol Blume with a potent enthusiasm as she continued to play her features with 2 Chainz' "It's A Vibe." She ended her stunning performance by bringing fans on stage for her last song, "OLLA (Only Lovers Left Alive)." Jhené was the concluding paragraph on a successful essay; she brought together the day's energy into one special, extended moment. 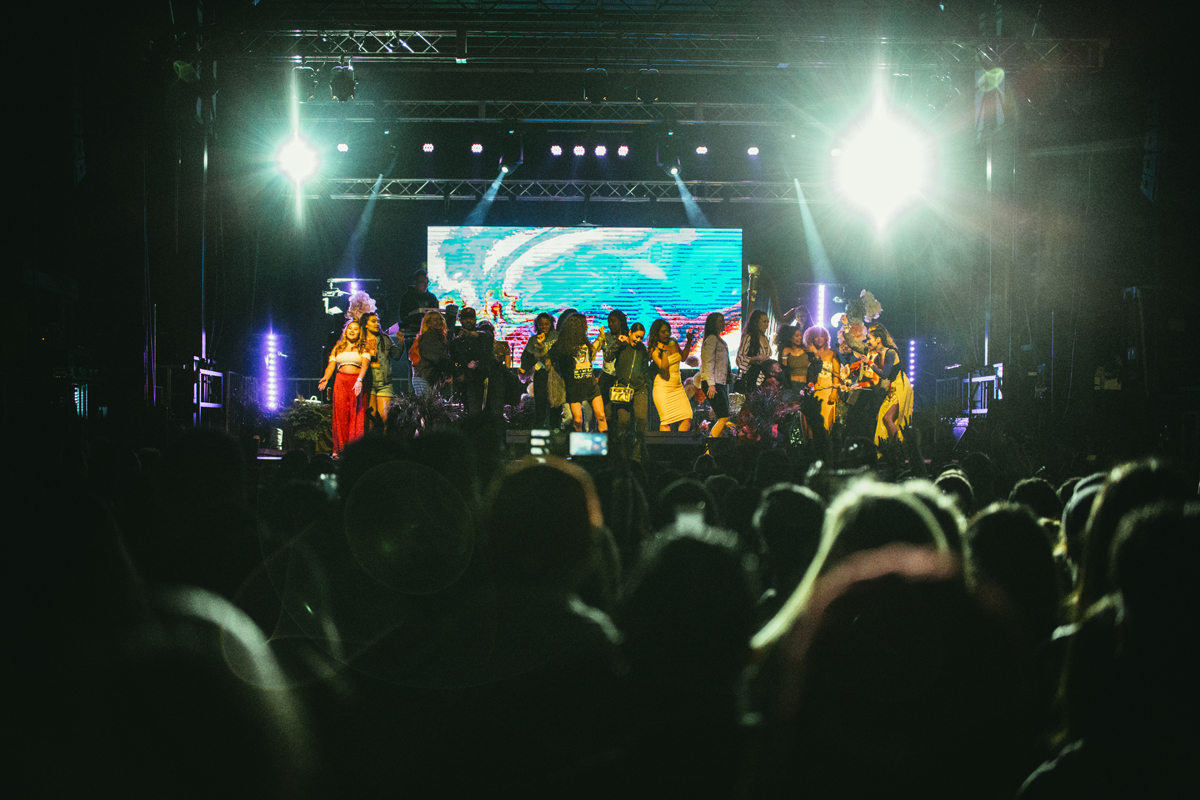