I recently had the opportunity catch up with the musician and producer known as KRANE in Atlanta on the tail end of his North American Fallout Tour. From his early days listening to metal and alternative music while growing up in Portola Valley, California, to his current gig traveling the world sharing his music and dominating the festival circuit, KRANE is a man on the move.

KRANE is Zachary Krane, a guy who has played music his whole life - from metal and alternative to improvisational jazz, and this present evolution as an EDM producer. However his initiation into dance music came later in life, when his brother took him to see Justice.  As he tells it, "The first electronic show I went to was Justice in San Francisco. It wasn't that long ago to be honest. And I wasn't even really into them or electronic music. I remember my brother had gotten tickets. I think it was my birthday. I was home from spring break for college or something. And that was cool, but I didn't really get it at the time. And the venue was weird. We were really far away from the stage. The only shows I'd been to before were actual concerts."  Although it would be cool to say, yup, that was it.  That's the moment a DJ and producer was born, Zach didn't suddenly re-spawn into the world after that show armed with CDJs and a fresh DJ name.

KRANE explains, "I don't know that there was a conscious choice, like I'm gonna go out, I'm gonna be a producer, I'm gonna play EDM and DJ. I mean it just happened. I realized, you know, at a certain time I wanted to be doing more with music for fun. And it was harder and harder to get people I knew to get together to play music. So I wanted to do something on my own." Through a friend he learned about Ableton and realized technology could stand in for actual band mates. In addition to Ableton, there was one more key discovery Zach mentioned that led him to EDM, "I kinda started messing around with it, and I don't think I was really making EDM at first or whatever. I think I was just messing around. And with that came looking to Soundcloud and learning what was going on in the scene, and getting more into the music as a fan as well." 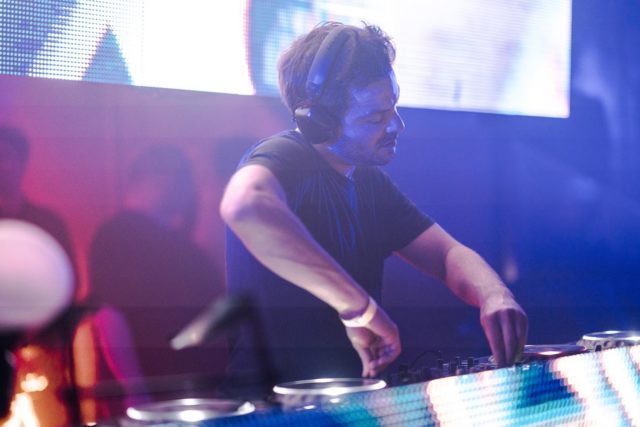 Soon, opportunity came calling. "I remember my first show - I got the booking request. I didn't really understand what was going on, I had no idea how to DJ. I said, 'you know what, if I just reply to this guy and say yes and commit to it, I'm gonna force myself to do something that's completely out of my comfort zone.' And that's exciting to me. It's like traveling to a country that's culturally super different. It's uncomfortable sometimes, but usually rewarding." Upon boldly accepting the booking and facing a tight deadline, "I learned how to DJ at the minimum level of proficiency in like a couple weeks in Ableton, borrowed a friend's APC to do it. Because I didn't know what CDJs were, and I played like the worst set ever. There's all this little stuff that no one tells you about. Like, when do you get on stage? How do you setup your shit? There's all this stuff on the table, and I have no idea what this equipment is. Can I just put my stuff on top of it? Where do I plug in my sound? How do I get a signal? I remember looking down at the mixer and just being baffled. And I played."

After getting through his first show with more adrenaline than skill, KRANE wasn't sure he'd get booked again. "I just remember leaving, someone handed me like 200 bucks, and thinking this was really funny. What a weird way I just spent an hour of my life, that'll never happen again. And then, um, you know it just kept happening." Ever humble, Zach describes himself as part of a "lower-middle class" in the music industry. "There's still five people at the top, but there's like 100 people in the middle. And I think it's really cool that there's this burgeoning middle class, or lower-middle class, of musicians, but they can still pay their rent, instead of like struggling and working a job at the same time." While the public will always crave superstars, you no longer have to be in the top five in order to do music full time, and talents like KRANE are putting in the work to stake their claim.

Far from a musician that's solely driven by a desire to achieve stardom and wealth, Zach remains motivated by the music. Drawing inspiration from moods, scenes, and aesthetics, KRANE translates those energies into his work. His storied SESSIONS collaboration project has awarded him the chance to work with producers big and small. Instead of climbing into the charts by hitching his ride to a legendary producer, KRANE works with anyone, no matter how obscure. If something catches his ear, that's what draws him in. I did manage to squeeze one wish list item out from Zach - "Hans Zimmer, that would be cool. I'd love to work with someone that's scoring film, or like the next Planet Earth soundtrack. . . You know if it's a fun project I'd love to step outside just like EDM for a bit. Why not!" Given that he's inspired by moods and scenes, there's a straight line between what drives him and a project of that nature.

With his set time approaching at Opera Nightclub a few blocks away, I left things on a cerebral note - if he could time travel into any era to make music, what would he pick? "No, I'd never go back. This is the best time I can see. I mean, can I go to the future? Maybe it'll get better? When could I have been doing this?" That sums up Zach in a single sentiment. He's so thankful to be living in a time where he's not restricted by instruments or genres. Without needing anyone's blessing, he's able to make a living in music. Far removed from the angsty and melancholy image of the metal and alternative stars he grew up listening to, KRANE is effervescently optimistic about the future.