Everything you need to know about Lina Tullgren [Interview]

Kurt Vonnegut has said that art is a way to make your soul grow. If we extrapolate upon that theory then we posit that making art is also a way of growing other people's souls. If souls are plants and art gives life, then Lina Tullgren has fed our souls, so to speak. Today, the twenty three year old from Maine releases her debut LP Won into the world. It is a remarkable feat for an artist to dispose of poetry and create something beautiful and flowery out of simplistic words and chords. (It is also time to dispense with the plant metaphors). Tullgren created a work of art based on relatability. Won explores themes of finding home, expelling the bad and unnecessary energy in life, and finding peace in experience, which we also found listening to the lull of her guitar. Tullgren was good enough to allow EARMILK to pick her brain about why she does what she does and what informs her creative process.

Wishlist, Lina's debut EP, was released in 2016 and featured five beautifully curated tracks awash with a the dense electric guitar sound that has become her signature. It is a quiet gem, introspective and unassuming of its beauty. By comparison, Won is backed by a full band. The vocal remains equally beautiful and sparse, the songwriting retains the great depth displayed on Wishlist, but the sound is fuller and more arresting.

EARMILK: So I listened to the album - I really liked it! It's a little bit of a sonic departure from Wishlist. I wondered if you did anything differently in the recording process?

Lina Tullgren: When I began this project, the songs were always imagined for a full band scenario, which we didn't really do for Wishlist at all. Those specific songs [on Wishlist] didn't require it. It has always been my intention since day one to have these songs flushed out for a full band. When we recorded Wishlist it was me and Ty in his bedroom, and Ty has since upgraded to a bigger studio space so we had more space to think about things, set up drums and any other different instruments. We still recorded it more or less the two of us with some contributions from friends. It is sonically different, but the process itself wasn't so different.

EM: The record is about finding your place in the world, finding a home, etc. What's your favourite thing about where you grew up? Where's home?

LT: I grew up in southern Maine, right on the New Hampshire border near the beach, in a town that was very small and insular. It wasn't isolated, it was close to New York and Boston and other cities. You could grow up isolated and alone but still be close to culture if you wanted to experience it. The area I grew up in was a great incubation chamber for a lot of really good bands and artists. I was very fortunate to grow up surrounded by a lot of people of varying ages doing interesting things, which was very good for me in terms of beginning my own artistic childhood.

EM: What's your favourite place you've ever traveled to?

LT: I'm really fond of Turkey. My mom and I took a long trip there when I was in middle school. I haven't travelled as much as I would like to. I've toured a lot, but not to many new places recently. I would say that Montreal is one of my favourite cities to visit, and we're going to Europe in January and so we'll get to go to a lot of new places then, which I'm excited about.

EM: What do you do in your spare time, when you aren't making music?

LT: I watch a lot of films. Actually I mostly just play music. But I also really like to read. Lately I've not had the focus for it, I've been a little too distracted and stressed out. Lately I've been taking a lot of long walks too.

LT: I really enjoy the author John De Lillo. White Noise is probably one of my favourite books. I've also really been getting into sci-fi in the past year. I really love all the books that William Gibson has written. Right now I'm reading a French book called "Elementary Particles" that I like very much.

On her influences, Tullgren is clear: it's not about just about an artist. It's about the people who shape and inform your life every day:

It's impossible for me to trace that back to one person. I grew up with a lot of really strange and fun adult figures in my family or my friends' families. I got really lucky in that I was able to soak up and be encouraged by so many different people who were doing so many different things. I had so many art teachers, music teachers and family members who were helping me. It's not something I can trace back to a songwriter or artist either. It's an amalgam of many different people. - Tullgreen

EM: I want to talk about the album artwork for Won. What inspired that image?

LT: Me and Ty were on tour in January, in Portland, Maine playing a show – earlier that morning we'd been at my cousin's house in Providence and my cousin's girlfriend has an aura photo camera – do you know about aura photography? She had taken our aura photos that morning and we were chatting with this person at the show about them. And he said "yeah aura photography's really cool - but do you know about ectoplasm photography?" We were like "no, what's that?" And he pulled up a bunch of images on his phone of this ectoplasm photography, and I became obsessed. It's a very arresting image. So when I was thinking about what the album art would look like that was the first thing that came up for me. I was like "it has to be an ectoplasm photo." It is just a really captivating image, whether that has a negative or positive connotation. But it also aligns with some of the themes of the record, which have to do with expelling bad parts of yourself or harmful people. It's been so nice, the amount of people who have reached out to comment specifically on the artwork.

Mapplethorpian in its lighting, the jarring image of Tullgren with "ectoplasm" being drawn from her mouth by a ghostly hand is attention-grabbing and provocative. 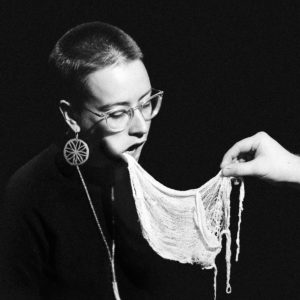 EM: Did you study music as a kid? What did you play?

LT: Yeah I've been playing music since I was about six years old. I played violin, and I have recently in the past month or so gotten into trying to play with more regularity. I played for a long time and when I was nineteen I decided it had been happening for too long so I walked away from it and started this project, and now that the record's about to come out I've had some time to begin to play violin again and think about new projects! It's been nice to play again.

EM: Are you ever nervous when you release material, because it comes from such deep personal experience?

LT: Not really. I think art is doing away with all of the fear. The words that I write are very personal, yes, but in the same breath I think the way I write is pretty abstract and ambiguous. It's not so personal that you know exactly what is going on.