HundredMillionThousand harshes your mellow with "Yalda"

HundredMillionThousand’s debut album, lp1, is set to be released this April 8th and the new single “Yalda” is the perfect example of what he can do. Based in Edmonton, Canada, HMT, or Noel Jon, is a Persian/Filipino producer who crafts epic, gritty, and unapologetically futuristic tunes. Find the new single below.

He definitely takes a page out of Amon Tobin’s book and achieves a big, atmospheric landscape with sound effect-heavy kits and crunchy synths. The suspense is palpable at all times and may be telling the story of HMT’s personal journey with mental illness. Both ominous and exciting, HundredMillionThousand captures an electronic texture that’s darkly colored by Iranian vocalizations and complex percussive patterns.

I got a sneak peak of the album and all the tracks seem to dance between anxiety and serenity, anger and peace. “Yalda” is my favorite, but a couple of the tracks with rap are on point too. Here’s a video for “Exalted,” featuring Cab’ral.

In an era so overly saturated with electronic production, HundredMillionThousand’s debut is a stand out because of its foreboding, aggressive quality. Forget the crowd-pleasers, HMT is here to explore anguish.

Listen to this song while you’re training for the apocalypse, and find the full album on Spotify, Apple Music, and limited edition vinyl this April 8th. 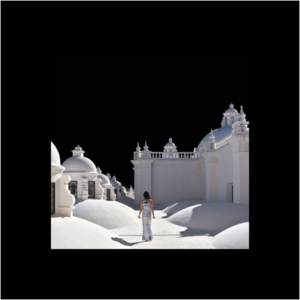