D∆WN and Machinedrum team up and lift off with new track, "Not Above That"

New Orleans-based singer Dawn Richard, a.k.a. D∆WN, is right on the brink of major stardom.  She's an industry veteran at this point, having worked with Bad Boy Records and seen considerable success as a solo artist.  Still, fate hasn't yet blessed her with the worldwide attention she deserves.  D∆WN's voice inhabits a variety of sonic territory, from dark, shifty-eyed hip-hop beats to more EDM-style production.  She's leaned toward the latter in recent months, and it suits her; R&B-inflected voices aren't usually matched with EDM, but the genre's flashy maximalism can't outshine Richard, who commands every track she hops on like a four-star general.

For D∆WN's latest, "Not Above That," she's teamed up with Travis Stewart of Machinedrum, who's been on an R&B production kick lately, having done beats for Obenewa and Rosie Lowe in recent months.  He pulled out all the stops this time around, applying his jittery, jukey madness in a more pop-oriented fashion than in the past, reminiscent of his remix for Daktyl.  Cynics, fear not; Stewart's not selling out here, he's worn about a million different genre hats over his long career and "Not Above That" is just proof that he could sell out stadiums if he, y'know, felt like it.  Check out the collaboration below. 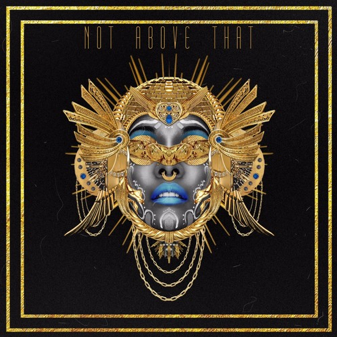