Eric Dingus is a young producer, however his talent and penchant to experiment with sounds or styles is proof that he has already gone through an incredible amount of musical maturation. Only eighteen years old, he has attracted some big name supporters, including Drake's October's Very Own imprint. A member of Prime has given him an opportunity to work with some up-and-coming artists making noise, like Jimmy Johnson. The more time passes, the more evident it becomes that, if Dingus continues on his current trajectory, he has a serious career ahead of himself.

Dingus is a native of Austin, TX and his music oozes Houston influence all throughout. While he might come from the food truck capital of the world, he much rather get throwed instead of consuming organic burgers or artisan water. His new mixtape released with OVO, HAW, is filled with purple vibes and interesting re-imaginings of classic and new tracks. It is one of their first forays into Chopped mixtapes and it was largely succesful.

Eric Dingus has a subtle style that is a mix of ethereal and dramatic trap; each song beat sounds like it wants to cry following each drop. His remixes drastically change the mood and temperament of the original, right from the beginning. Hearing A$AP Ferg over this gorgeous, meandering beat is oddly amazing. No matter how hard the lyrics are, Dingus can shine a deeper, more perspective light on them, highlighting a totally different side than usual. It makes for great and easy listening; there are parts where it feels like the track is just floating along and then he drops some crazy vocals, helping to ground the experience in a nice way.

Unfortunately, HAW doesn't have separate tracks, but is one long forty minute jam. Personally, a tracklisting would be much appreciate though, but each song smooth transitions to the next, so it isn't too bad. I like the guerrilla style he typically employs, where everything seems one mix away from being complete; it adds more character to Dingus typical ambient production. Definitely check out the mixtape, you might be confused at parts, but you won't dislike the entire experience. 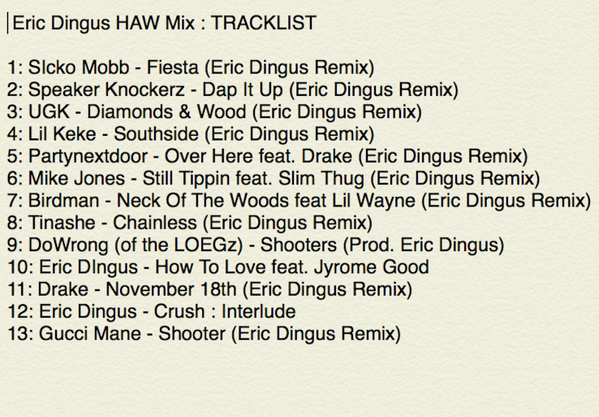