If there's any piece of music tech that you share with the artist it's the only thing separating your ear from their bitter sweet sounds. Headphones have been around way before the advent of portable CD decks, walkmens, MP3 players, and even two turntables and a microphone. But it wasn't until recently that headphones began to fully branch out of their practical uses, you can now point out a pair of Beats on the subway and say that's not someone who cares about a warm mid range, that's a fashion statement. In comes Urbanears, one of many companies spawned in this latest vanity trend although it's tough to say whether the recent concern for head wear is even a trend at all. With technology making the starter DJ setup cheaper and more accessible, there are now more jockeys than ever and with that comes a demand for headphones that can not only zone in on the mix but also stand out or camouflage itself comfortably into the threads of the night.

This is exactly where Urbanears' debut DJ cans stand. Zinken takes the fundamentals of DJ headphone design and dresses in deep matte colours to contradict itself. It subtly stands out, much like a pair of TMA's or HD25's. But that's not to say Urbanears have made one for the audiophiles, the common gripe with nearly all fashion minded phones is holding back on sound quality. After some hours with Zinken I found the mid to high frequencies to be the only thing worth whining about. That's when I checked the price tag and realized for the money, you shouldn't expect the most ethereal sounds to grace your ear. DJ headphones in general were never geared towards having a smooth response, in fact a good pair is bass heavy so you can hear the kick and beatmatch your tunes accordingly. The Zinken has that solid bass response you'll need when you're playing out in loud parties and clubs with all sorts of beats, beers, and sweaty bros that want "Levels mannn". Luckily Zinken cups firmly to your ear, giving you the noise isolation you need to focus on the mix in front of you.

The features that Urbanears have tailored for DJs does a great job at crossing over into the headphone's everyday use. The headband is a bendable rubber that can withstand the bar of nightlife, a very admirable display of quality as a lot of cans end up snapping after being tossed around and stepped on whenever there's alcohol nearby. An attribute I find unique to the Zinken is having both 3.5mm (1/4") and 6.5mm (1/8") inputs on each speaker, with the kevlar cord having the male inserts on each side as well. That means one cord, and no lost screw on adapters to worry about. Wrapping it all up, when you put the Urbanears Zinken in the right box, you won't find a more stylish yet functional DJ headphone for under a bill. You can throw words at me all night long, I'm not going to be producing tracks on hundred dollar headphones but when I'm playing out the last thing on my mind is how crisp the highs are on the hats swishing in my right ear. For that reason, bringing a pair of polished looking phones that does the job at a price I'm not worried about leaving at the scene of the crime makes the Zinken a nice and reasonable purchase. 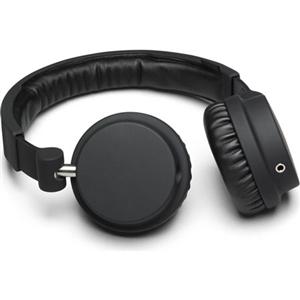 The good: Modern minimal design comes in 10 matte colour schemes to suit whatever style. Great sound isolation considering its size and the durable metal hinges swivel and fold for the on the go DJ. Turncable is made out of bullet proofing kevlar, and the headphone contains 1/8 inch and 1/4 inch inputs making it versatile for everyday use.

The bad: Not the best on highs but the strong bass response will get you through your DJ gig.

The dealbreaker: The Zinken takes a nice seat between the DJ and casual headphone market, making it a good compromise between adequate performance and fundamental a la mode design. Even though Urbanears has tailored it to DJs, it's really a headphone for anyone looking for a sleek set of cans that offer style and isolation without breaking the bank.