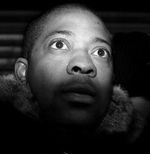 RJD2 is a busy man now that his latest album has officially been released. The album, The Colossus, was just released on the 19th so it was a great pleasure for us to be able to speak with him after such a major release even though we only had a chance to ask some rather softball type questions. Check out the interview below and definitely go buy his latest album, especially considering the fact that RJ is  in control of all aspects of his album release with his own label.

Here's a track, from the new album, to ride on while you read the interview:

EM: How many records do you have in your collection?

RJD2: Never counted, but probably in the range of 5000. Not a huge collection by any standards, really.

EM: How would you describe the state of hip-hop as it is today?

RJD2: It actually seems like rap music is improving right now. I see the success of acts that are really just doing straight forward, raw music- Jay Electronica, Fashawn, and even all the way up to Wayne it seems like there is a focus on lyricism and just making good music. I mean, it really is hard to make broad assessments of music genres when you are only looking at isolated artists, but for those who care to, it seems like there is promise.

EM: Who's your favorite super hero and why?

RJD2: Does link count? If so, Link, cause Legend Of Zelda is probably my favorite game franchise of all time. I never cared for comics, I was a game fan since day one.

EM: What was the most fun project you've think you've done to date and why?

RJD2: I couldn't pick one, really. Everything is fun-or at least educational-for its own reasons. But I sure am having a fun time watching the release of my new album. Does that count?

EM: What can we as fans expect from you and from RJ's Electrical Connection in the near future?

RJD2: Obviously, "The Colossus" is the most immediate one. Then, I'm going to do a sort of modified/inverted/instrumental version of the album. I've got at least one side project thing I want to put out. I've got a record that's almost done with one of the singers on the album-Aaron Livingston. Who knows what else?

EM: How does it feel to own your own studio and label after being in the industry for 10+ years?

RJD2: Pretty rewarding. It really gives me a sense of freedom; not only in being able to do what I want and release what I want, but also to be sustainable about how im going about music.

EM: You have a wide range of genres that you dabble in but who are some artists you routinely listen to you in your free time?

EM: Do you have any habits you always keep when producing an album or any superstitions?

RJD2: I guess so. I always try to record as much as possible for a record; more songs than necessary, so you can pick and choose. I Don't ever drink in the studio. I try to keep it clean. I try not to force the process; if its not working, I go do something else.

RJD2: Wake up, brush teeth, feed dogs, make coffee, eat, take dogs to the park. Back home and work til about 5pm. Feed dogs, cook dinner, and either relax or work for another 4-5 hours. In bed by 11pm. Unless im on tour, then its rip and run all day.

EM: We know you lost Camu Tao a while back and was wondering if you wanted to possibly share a good memory about him with your fans.

RJD2: Wow, so many. Here's a funny one: it's 1998, or maybe 1999. Me, Copy, Camu, Adrian, and Nelson Morales all drive from Ohio out to NYC to do some things for Bobitto Garcia. He gets us a spot at the Nuyorican Café, and we did Fat Beats in Philly as well. Thru the whole trip, Camu was riding shotgun in a minivan. He didn't want to relinquish that seat, ever. So we are in NYC after the gig, and I get in the shotgun seat after immediately calling it; he doesn't even have a chance to shove me out of the way. No fight, im already in the seat. I didn't care that much about sitting shotgun, I just thought it was an opportunity to mess with him. He just explodes, and says "Im not getting in the van, fuck you guys". He walks off down the street at 2am by himself. Eventually, I got out and gave him the seat, and he came back. But it was hilarious.

We appreciate the time RJ was able to spend answering our questions and highly recommend that you go pick up his newest album from the store or from iTunes. This album marks the 10th year that RJD2 has really had his footprint on the scene and it also marks his first release under his own label.