Kanye West in "We Were Once A Fairytale" 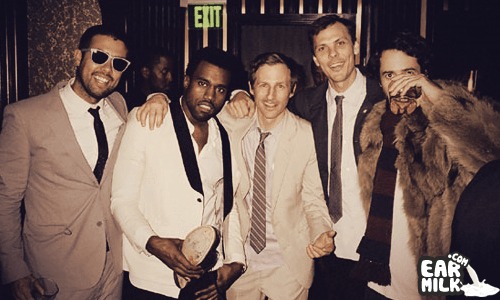 A short film featuring Kanye West that was directed by Spike Jonze. In the movie you see Kanye and all of his boys chilling at the club, but Kanye is drunk out of his dam mind and is acting like a fool. Quote under will tell you the Full story..

In the film, Kanye plays himself drunk at a club acting belligerent and boastful, telling starstruck club-goers that the song playing in the club is his. He wanders into a side room where he encounters a beautiful woman. They start having sex and then he passes out on her leopard print dress. When he comes to, he finds himself in the VIP room with his pants down - he was hallucinating and fucking the pillow. The realization startles him and he rushes to the bathroom where he vomits what look like rose petals.

Then it gets weird.

Kanye finds a bowie knife in the bathroom and cuts into his stomach, spilling a torrent of more petals. He digs in the knife deeper and then with his hand rips out a small furry rodent, like a demon, only its quite cute. When Kanye realizes it's connected to him with an umbilical cord, he pulls it hard, ripping it out of him for good. He then puts the demon on the sink and hands him a tiny bowie knife to fit the critter's scale who then uses it to commit hari kari.