The Treasure Island Music Festival takes place on the 568 acre island that rests gently in the Bay Area between San Francisco and Oakland. Since it's inception in 2007, the festival organizers, Noise Pop Industries, have transformed the island into an intimate two-day beacon for Bay Area love, beautiful music, food, drinks and art. Over the years, TIMF has provided more than 238,000 fans with one of the most unique experiences that the Bay has to offer—with stunning city views, a gentle breeze from the water and 26 of some the top artists in the music industry performing across two stages. This eco-friendly, community building festival is one of Northern California's hidden music gems—avoiding any over-lapping artist sets, crowded stages and still providing non-stop shuttle transportation, creative Burning Man inspired art and delicious food. This event brought the island performances from incredible artists like Modest Mouse, TV On The Radio, The Flaming Lips, LCD Soundsystem, MGMT, The XX, deadmau5, Outkast and more. But as times change, some things are unavoidable and 2016 will be the final year that the festival will take place on the magical island that so many have come to love. 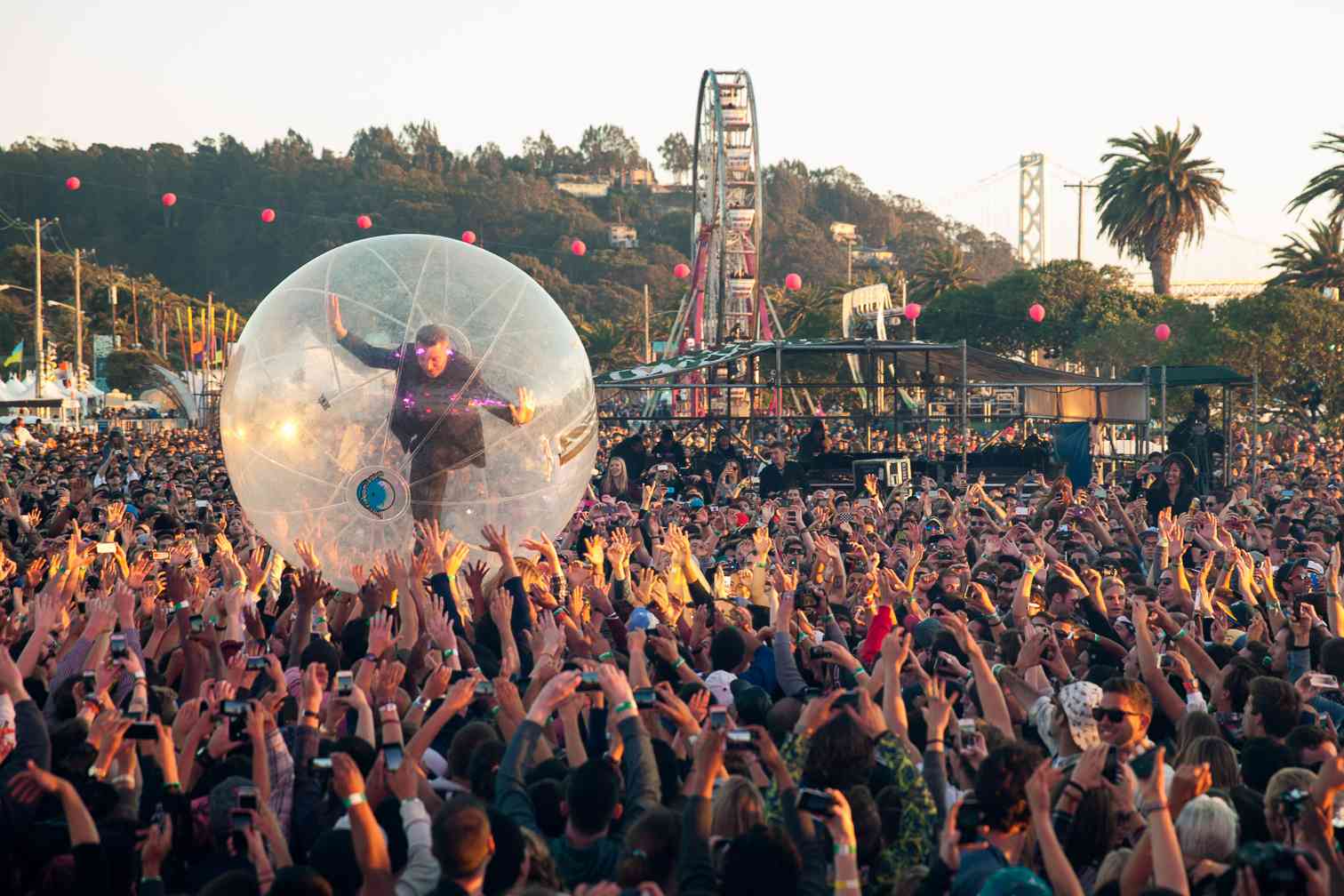 In 2012, the New York City music festival known as Governor's Ball gained immediate popularity and as that event expanded it was forced to move from it's original location on Governor's Island and up to Randall's Island (still maintaining the same name). Although this may be the last year for fans to catch a glimpse of a setting sun dwindling behind a music stage from the actual island itself, the organizers still have plans to continue the festival in a different location. So as we bid farewell to Treasure Island, we look forward with optimistic hearts and celebrate the incredible new memories to be had at this next location. In the meantime, fans and artists alike have taken a moment to reminisce over the cherished moments that this festival has already brought us.

(For tickets to the 2016 Treasure Island Music Festival, click here)

"I remember that the whole day was overcast, as it so often is out on the bay, and it was like the whole festival was on the island from LOST. But right when my set started, the clouds parted, and we could see the whole of San Francisco in all its glory. Then that acoustic set we played that became basically as popular as anything I've ever done, in a winery on the island. And after that I got interviewed in a Ferris Wheel and at a Silent Disco. It was a very memorable day, and one that basically started everything going to the next level here in the Bay for me." Michael Deni, Geographer

"Treasure Island 2013, my girlfriend won an Instagram contest from Ray Bans, and while Beck was finishing his headlining set, we boarded a nearby boat and set sail for San Francisco. I'd been late to the island that day, and missed a band my girlfriend (who'd gone earlier with friends) said I would've loved. Then, in the belly of the boat, I stood shoulder to shoulder with that band, Lord Huron, as they played an immensely intimate set to twenty people as we drifted along the Bay. She was right, and so naturally, I married her." Zack Ruskin, staff writer Consequence of Sound

"Treasure Island was one of the first big festivals we ever played in the U.S. We were on tour supporting The Con and we were starting to see our profile as a band grow.  None of us could believe we were playing right before The Raconteurs. It felt like a magical and transformative night in our career. The audience was one of the biggest we had played to up until that point, and when we got off stage I remember thinking 'well that was fun.’” Tegan, Tegan and Sara 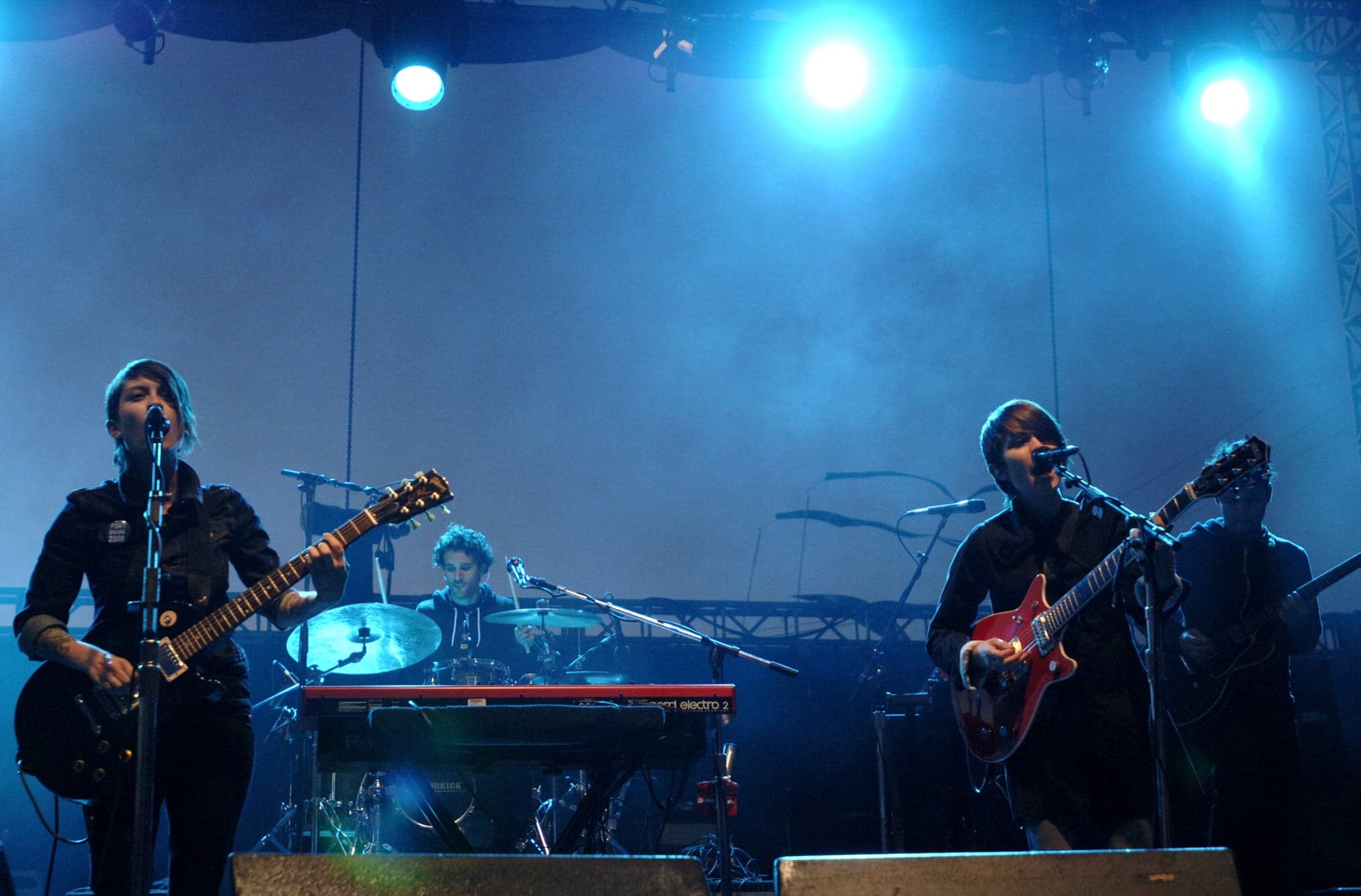 I have so many favorite memories of Treasure Island (TIMF). It's my favorite music event in the city, and has been since they first popped that Ferris wheel in place when I was still the music editor at SF Weekly. I loved watching Four Tet play as the sun was setting and then chatting with (and scratching my head with) Kieran Hebden as deadmau5 took the stage later. That was just one of many examples of the intimacy, and the odd juxtapositions, that this unique festival provides. I also loved when Monotonix played on, and then all around, the stage — because TIMF is run so smoothly, it needs a little punking up of the routine from time to time. I really hope the good folks behind TIMF are able to secure a new spot that makes people in the Bay Area appreciate our scenic dominance like they did with Treasure Island. Here's to more outdoor festivals (that aren't relegated to Golden Gate Park). Jennifer Maerz, freelance writer & former SF Weekly music editor

"As residents of SF, we had been attending Treasure Island for years so it was extra special for us to get to open on day 2 back in 2014, especially in front of our friends and hometown crowd. To top it off, Massive Attack headlined that night and sounded amazing. What a privilege it was that day to be both a performer and a fan." Johnny Hwin, Cathedrals 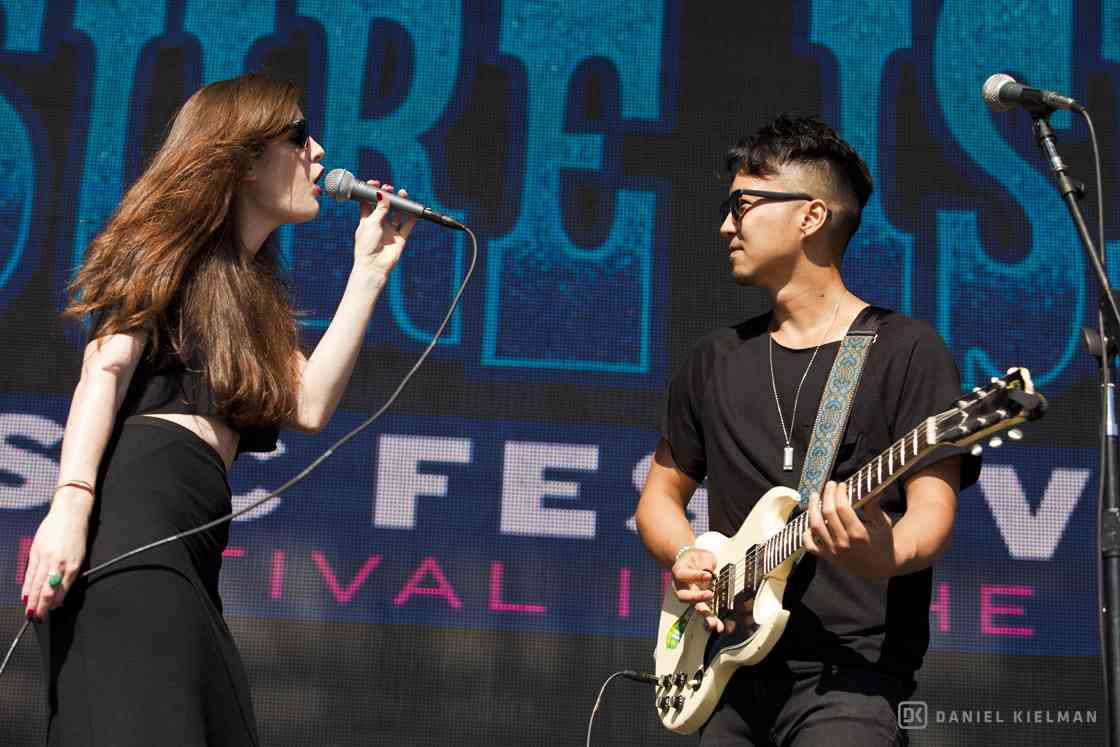 "Treasure Island Music Festival was one of the highlights of 2013 for me - I played an early afternoon set, but the stage was packed, it was a beautiful backdrop (I was playing with my back to the Bay), and I felt like this was one of the first times I really felt the love of the fans that the Bay Area has consistently offered since. I remembered saying that maybe a dozen times that day: This has to be one of my favorite festivals, it has a beautiful setting, just enough stages to offer a diverse array of artists but few enough that it is possible to see everything you want to, and it is completed by the overwhelmingly positive San Francisco vibes! Also, this was the night I got to stand 20 feet away from Thom Yorke before he took stage with Atoms for Peace, which was a sort of stand out memory in my career (I got to "open" for Thom Yorke!). Thanks for the good times on Treasure Island!" Robert Delong 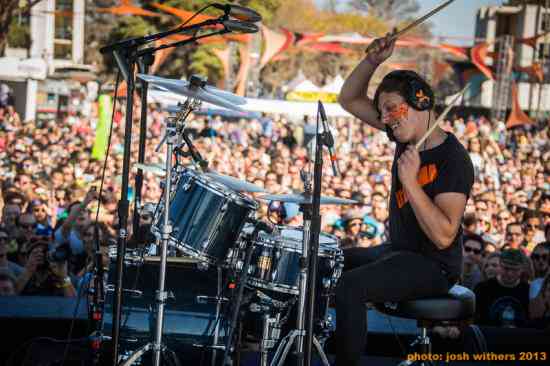 "I've had an amazing time every year I went. Last year was great because I went to the island and campaigned for mayor as so many people were there were excited about the possibility for a better San Francisco. In either 2008 or 2009, a now defunct company called Imeem paid me to be backstage and interview all these bands while on camera. It was one of my first on-camera gigs and I got to meet and interview really wonderful artists like TV on the Radio, The Foals, and others I can't remember. It was also the first time I met John Vanderslice and he and I hung out and talked about Nas  for over 20 mins. He's still, hands down, one of the coolest guys in music." Stuart Schuffman, writer & Editor-In-Cheap BrokeAssStuart.com

"Absolute favorite TIMF memory was the year STRFKR played. I worked for their record label at the time and their tour manager asked if my friend and I could dance onstage with the band. So my friend grabbed a sumo wrestler costume and I grabbed an alien onesie and we danced our asses off in front of tens of thousands of people." Valerie Veteto, freelance writer PASTE Magazine, KQED, The Bay Bridged, MTV Iggy

"The first time I played Treasure Island, in 2009, was also the first show that we ever used real pyrotechnics! It was a dream come true.  It was a stressful day, trying to make sure everything was in order for the fireworks, but it went off smoothly." Greg Gillis, Girl Talk 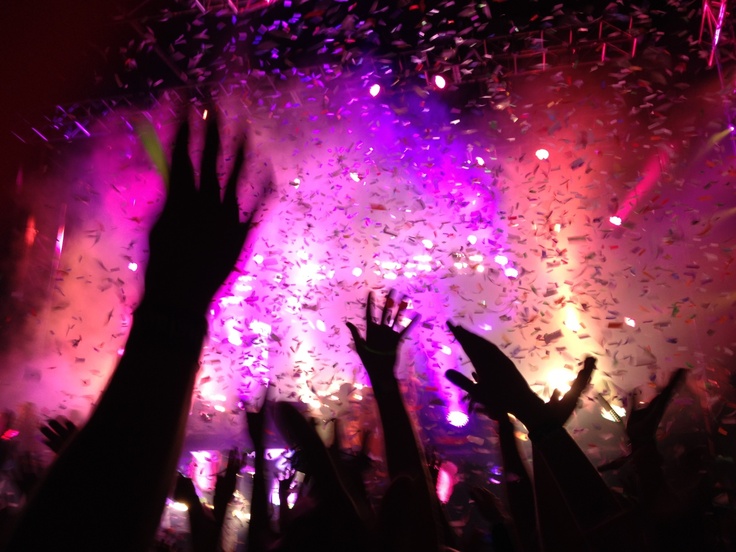 "My favorite memory of TIMF was actually my first time going in 2014. I invited one of my oldest friends since childhood to join me for her first music festival experience ever. I've been going to festivals for years and had been telling her she had to come with me sooner or later. This one wasn't a hard sell -- a short (free) bus ride to and from the city, sweeping views of the bay at sunset, great food and a ferris wheel, what's not to enjoy? When we were there together, I remember being absolutely overjoyed at being able to share an experience with her that means so much to me. It was like being a kid and showing your friend your room and all of your cool toys. See, isn't this MAGICAL?! It was still warm from the late summer, so we were in sun dresses dancing and singing our hearts out. It was also my first time catching a glimpse of a stage by climbing another friend's shoulders. TV on the Radio was playing, the sun was setting and I was in absolute heaven. I'll never forget the feeling Treasure Island gave me. It's sweet and exhilarating in the same way as kissing a summer fling." Kristina Bakrevski, music photographer & freelance writer

"It was a fun festival. We must have maybe only played less than ten shows when we played TI and there we were playing in front of the Flaming Lips' production, their big screen and all their shit. Watched MGMT from the side of the stage too. What a fun weekend." The Limousines 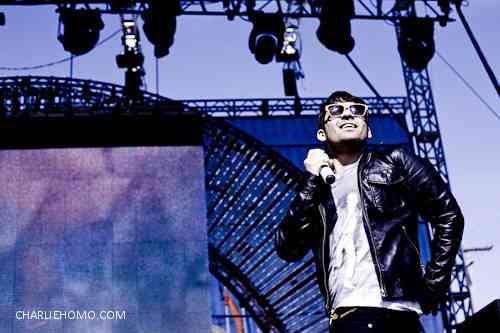 "I have a lot of great memories of TIMF and I'll definitely miss it now that they are moving it next year. There is nothing quite like sunset sets on the Island. From incredible, amber Indian summer sunsets, to the feeling of being in the sun all day only to be blanketed in a cool fog for the headliners. Perfect for the crowds, but often windy, with glare from the sun playing havoc on acts that rely on reading the screens of their electronics. Classixx and Chet Faker are two of my all-time favorites to occupy the sunset act. One funny moment happened in 2012. I was in the back of the festival using a lovely porta-potty when I heard someone start playing and fell in love with the sound. I hurried back to the stage and found out it was the reggae-influenced indie act, Wild Belle. Fast forward a few years and I am walking out of a bathroom in Paris Charles de Gaulle Airport and ran right into keyboardist/sax player Elliot Bergman and proceeded to tell him what a big fan I was. It was definitely one of the most awkward interactions I've ever had and brought me back full-circle to hearing them for the first time in a toilet on Treasure Island." Bob Patterson, managing editor SF Critic

"I remember that when I played at Treasure Island, I saw The XX, drank an extreme type of IPA and danced to Girl Talk, got a pic of me levitating (photo trick, not witch ability), and looked out at san francisco from a little spot of earth i'd never stood on before. it was a special day and a special festival. gonna miss it." K.Flay 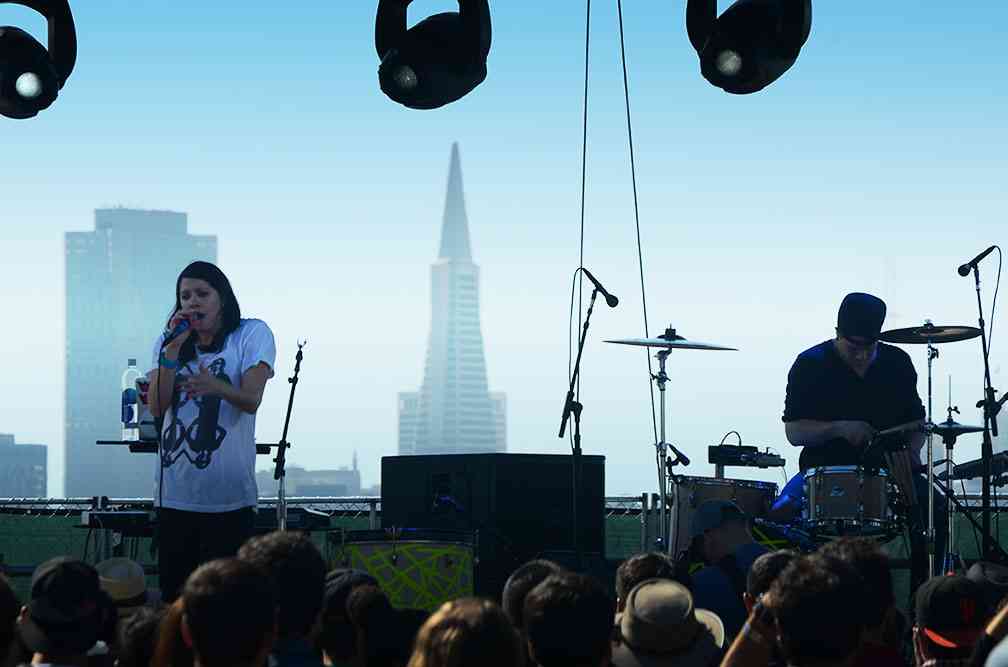 "We were at the last song in the set as I intro’d in the Young Blood keys line. Crowd went wild. When the time came for the beat to drop, Thom’s huge guitars came in, but the rest was complete silence. Due to the intense sunset, I had mis-triggered a bunch of loops which broke the track and had the whole audience let out a disappointed Ooohhhohhohohoh. I turned around and pulled the fingers at the sun while the camera man quickly cut away from me, and we did it again. Except on second attempt when I got the beats right… Thom forgot to play guitar." Aaron Short, The Naked and Famous