1 year ago by Vivian Lin

Every year, in the cusp of the summer's beginning, from the early, lucid starts of sunrise to the imperceptible night's beginning, Las Vegas welcomes the return of Insomniac Events' infamous Electric Daisy Carnival (EDC) to the Las Vegas Motor Speedways. Situated 45 minutes away from the bustling hub of lavish casinos and engorging buffets, EDC becomes a small city of its own, punctuating the barren landscape with illuminating neons and the laughter of festival-goers clad in less than but drenched in euphoria. It is astoundingly ethereal, poetic in its own chaotic, head-banging way and exactly a month ago, EDC painted the sky electric for dance music lovers, setting a new standard for festivals all around the world with its thoughtful and wholly detailed landscape. It is the deep and pensive art direction that particularly sets the festival apart from others, succeeding in where others failed in its carnival theme.

Easily described as one of North America's largest parties, the three-day dusk till dawn event is nothing short of a pilgrimage, a welcoming stage for all lovers of dance music. With a multitude of stages catering to varying genres, intricate art cars that boasted intimate audial experiences, to the many rides, lounges, and activities installed around the grounds, EDC knocked real-world sensibilities out the door and instead, resonated with its adult fairyland reverie. Delicately strung neon lights and staggering towers illuminated the way, cloaking magic onto star-gazed fans. Putting the lineup to the side, Insomniac's dreamy attractions and over-the-top decor help make EDC Las Vegas a truly memorable experience that goes beyond the music.

With a new year, comes new things and this year, Insomniac ushered in new designs for four of their biggest stages: kineticFIELD, cosmicMEADOW, circuitGROUNDS, and neonGARDEN. While the now infamous closing of kineticFIELD and quantumVALLEY on the second day (due to heavy winds) will forever leave a mark on EDC 2019, Insomniac was quick to handle the situation best as they could and continued to pave the way for an incredible and impressive weekend. 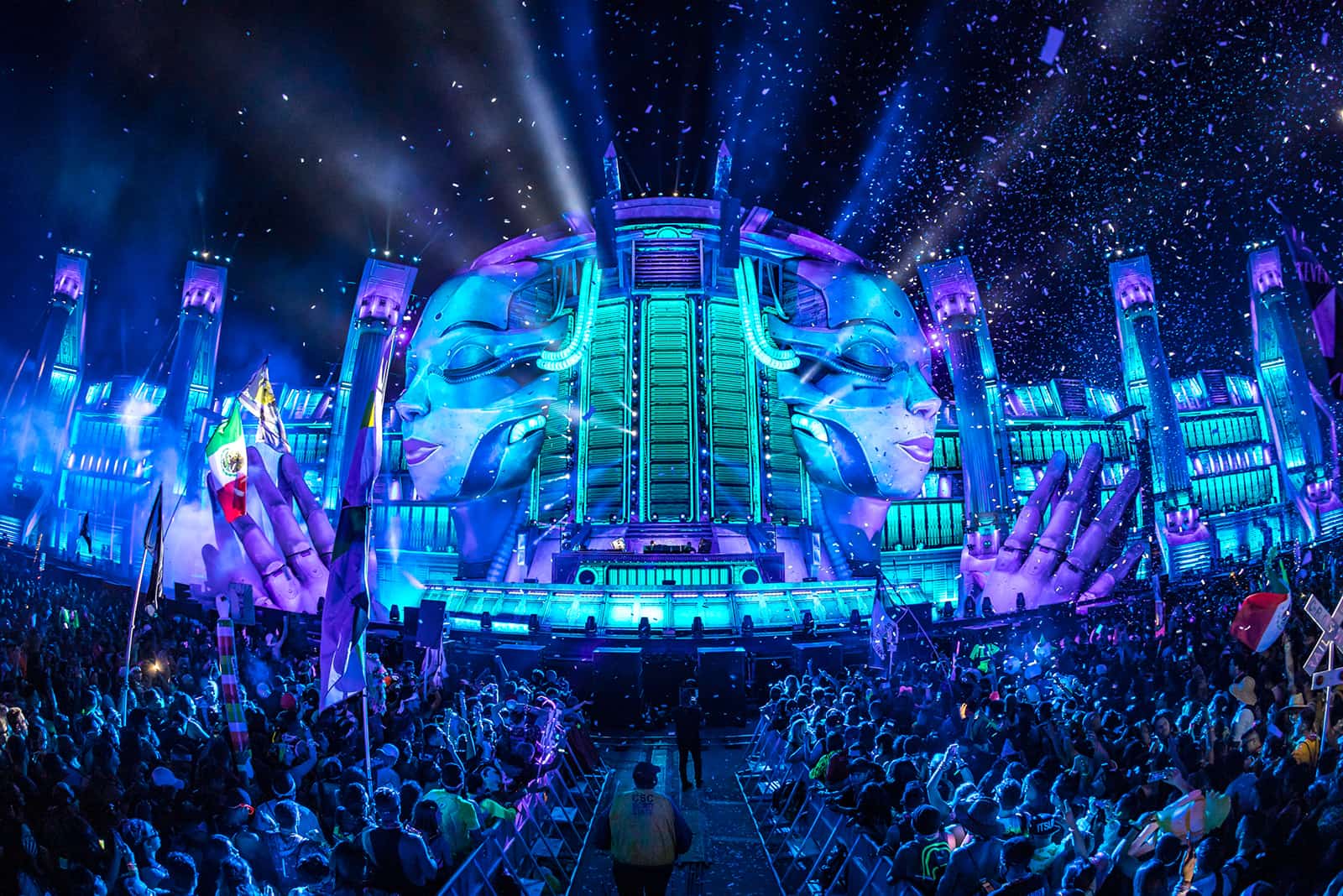 Two mecha women, wonderfully futuristic and beaming with cosmic energy, faced either sides of the kineticFIELD main stage, hands clasped in prayer position—as though drawing in the vivacity and zest emitted by happy festival-goers. Spanning from side-to-side of the Speedway, the stage was a sight to behold, a mesmerizing piece of art that fully embraced the neural and nuanced oddity of EDC.

To the left of kineticFIELD, through the maze of sculptures, colourful bean-bags and over steel stairs, is the vast expanse that is cosmicMEADOW. Here, bleachers hug the field comfortably, offering sky-high views of the grounds and if one was lucky, one bar of signal. 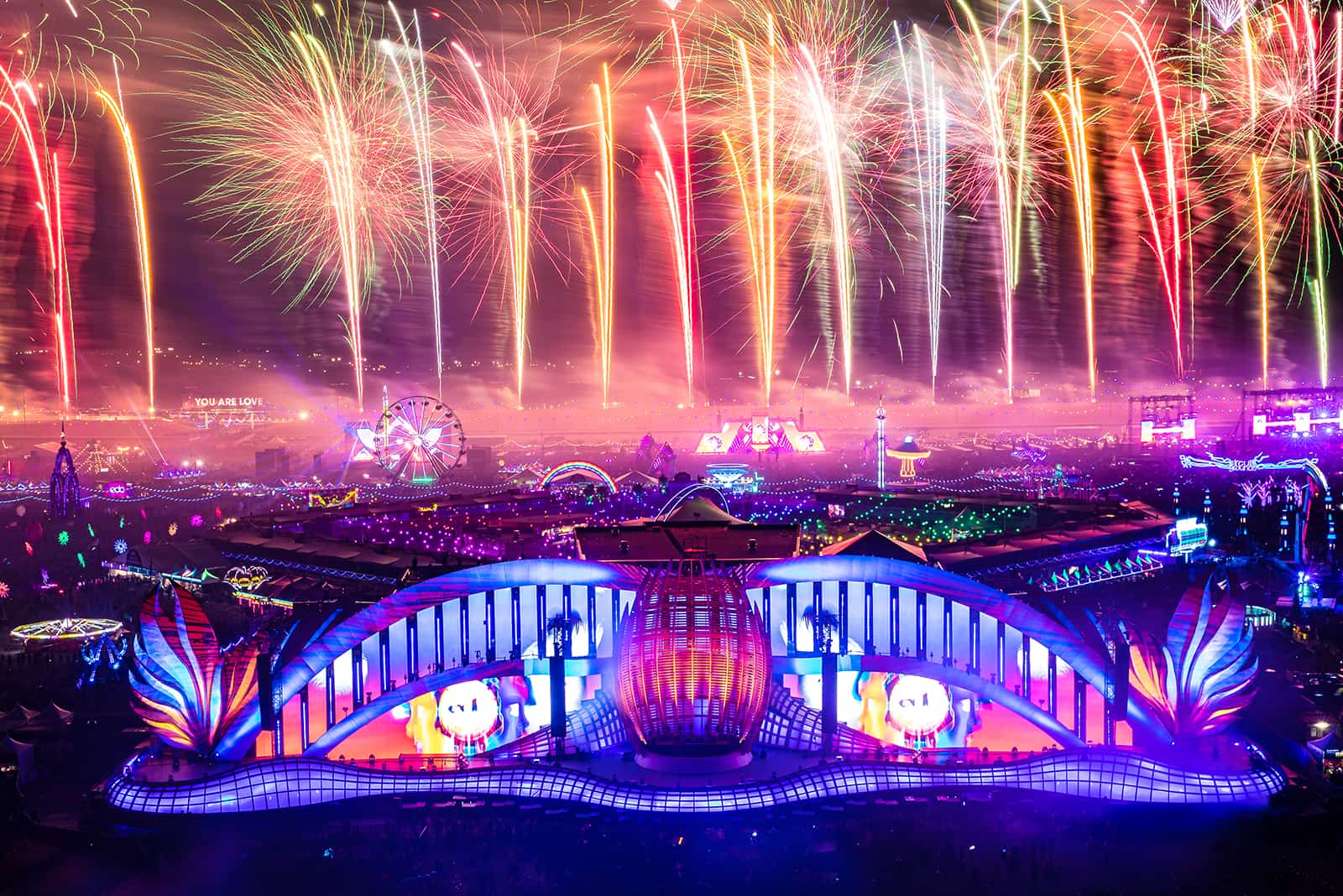 While the main stage had two distinct figures, cosmicMEADOW was instead, one distinct set of eyes, a monument to perpetuate the memories of those who dance within its confines. The sweeping LED screens illuminated the wooden, blooming flower structure in the middle, delivering excruciatingly beautiful light shows and hallowed visuals for the performing artist and subsequent crowd.

On top of the already magical production value set by the festival itself, each individual artist performing this year were also looking at how to deliver something truly spectacular during their performances. Boombox Cartel was set to perform at the cosmiMEADOW this year and before his set took some time to share with EARMILK  his expectations for the visuals. "I mean, no one really tells the truth so I'm going to tell the truth," he laughs. "It's a lot going on. It can get super overwhelming you know, preparing the set, preparing the video and visuals. I have five people on crew working at my Airbnb right now and we have to coordinate the fireworks, we have to coordinate the lights and coordinate the visuals—it's a lot going on. It's not pretty."

"You know for a lot of people they say hey, I have a USB with a shit ton of music, I'll pull up, plug in and play and get drunk and that's the other way to do it. But you know, I really want to impress my fans, I want to give back, I want to show them what's up and thank them." 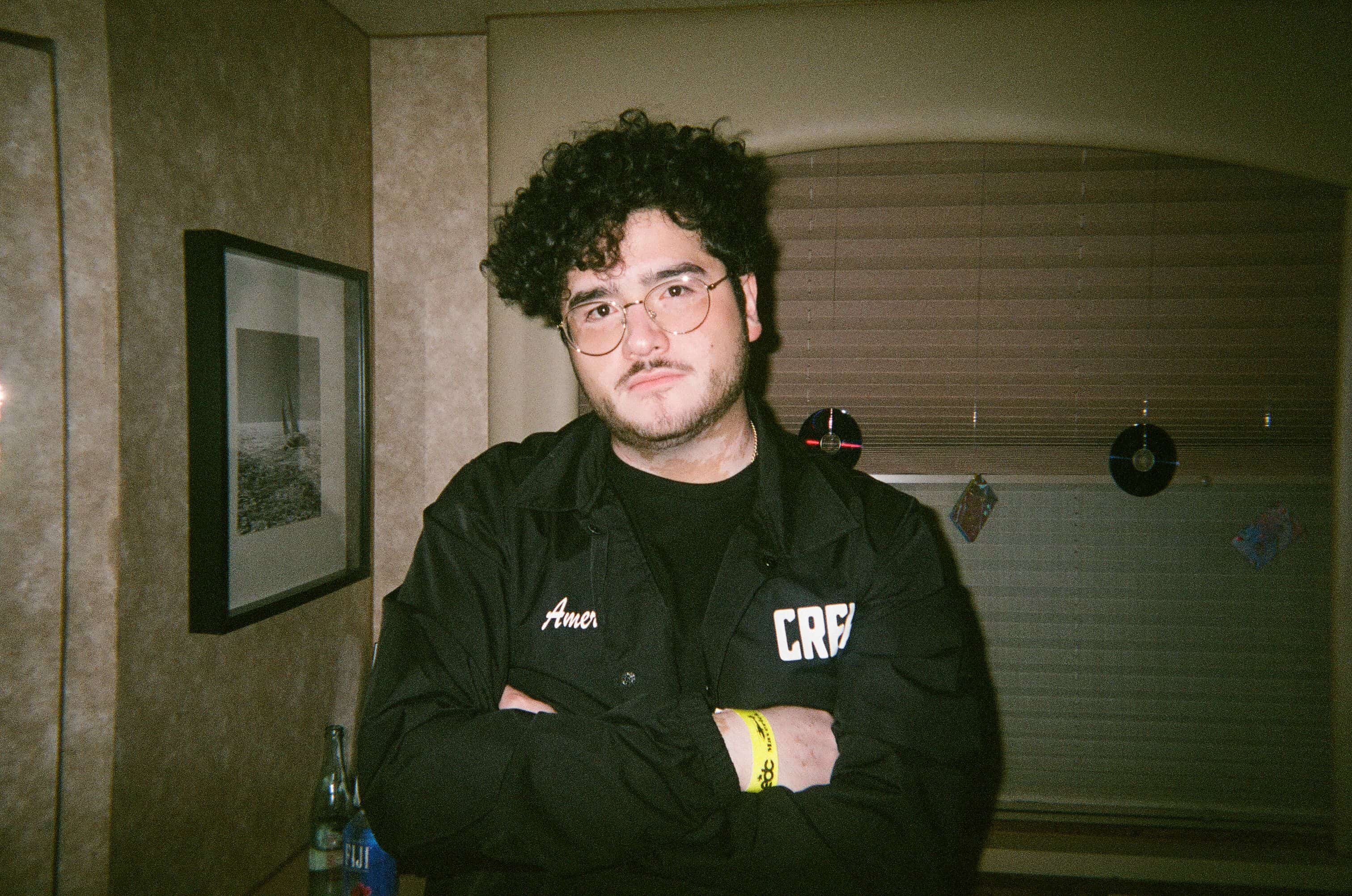 Walk down to the end of Electric Avenue and one will find themselves at a stage surging with energy, teeming with lasers and sparking festival-goers into bouts of unorthodox dancing. The epicenter of all things that ignite your soul, circuitGROUNDS was a conglomeration of bass and all sounds that shook, grounding itself as the place to be for sets that ranged from dubstep to bass house to techno. It was also the stage where Insomniac teased of an unprecedented surprise guest (hey Skrillex!) 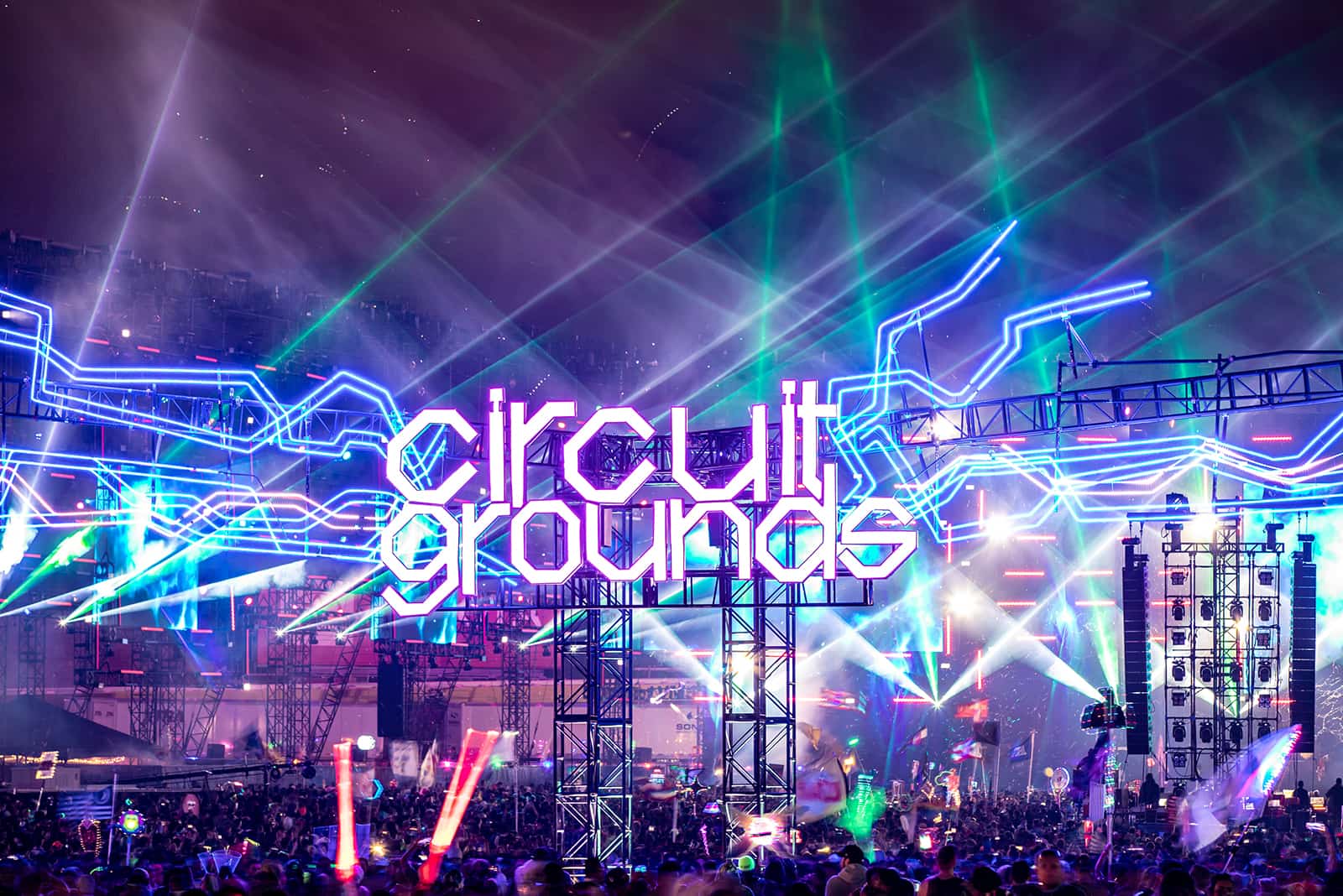 Situated in the far right corner of the Speedway, in between the modulated quick beats of quantumVALLEY, the new Pixel Terror that juts out of the landscape as an enigmatic black box and the field that is cosmicMEADOW, is an enclave of whirling bass and blaring sirens. Reminiscent of the brooding pockets of Berlin, Insomniac's factory93 leg reimagines neonGARDEN into a much larger warehouse party—one that attracted a star-studded attendance (hello Paris Hilton!) and a reposed crowd. 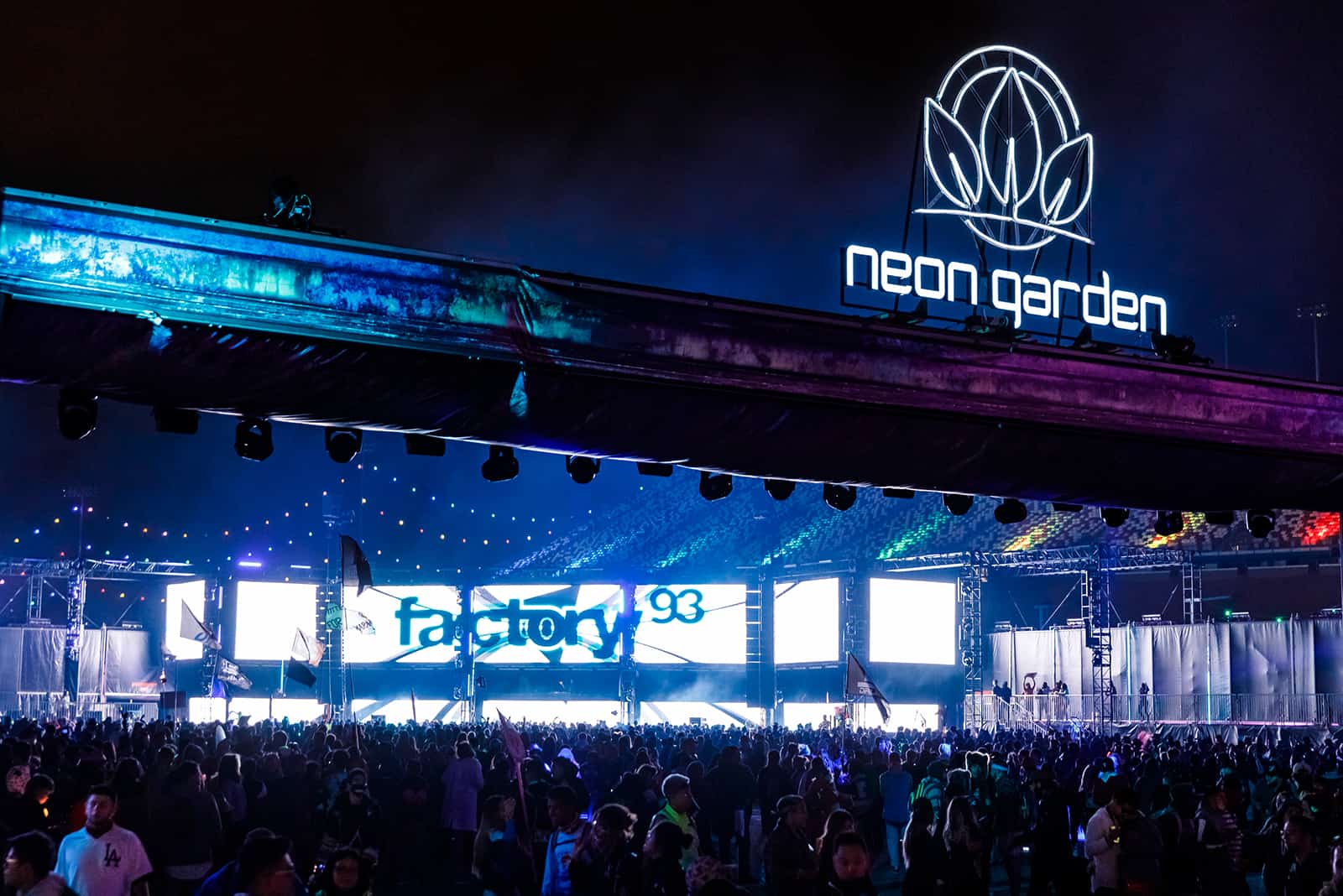 Cascading into lasers and fuelled by the incessant yet invigorating thumps of its progressive synths , quantumVALLEY is not for the faint of heart, but meant for one that is all for the 138 BPM. Oscillating between various forms of trance, quantumVALLEY touted a smaller percentage of the Speedway yet, maintained an overwhelming presence in structure and stature. 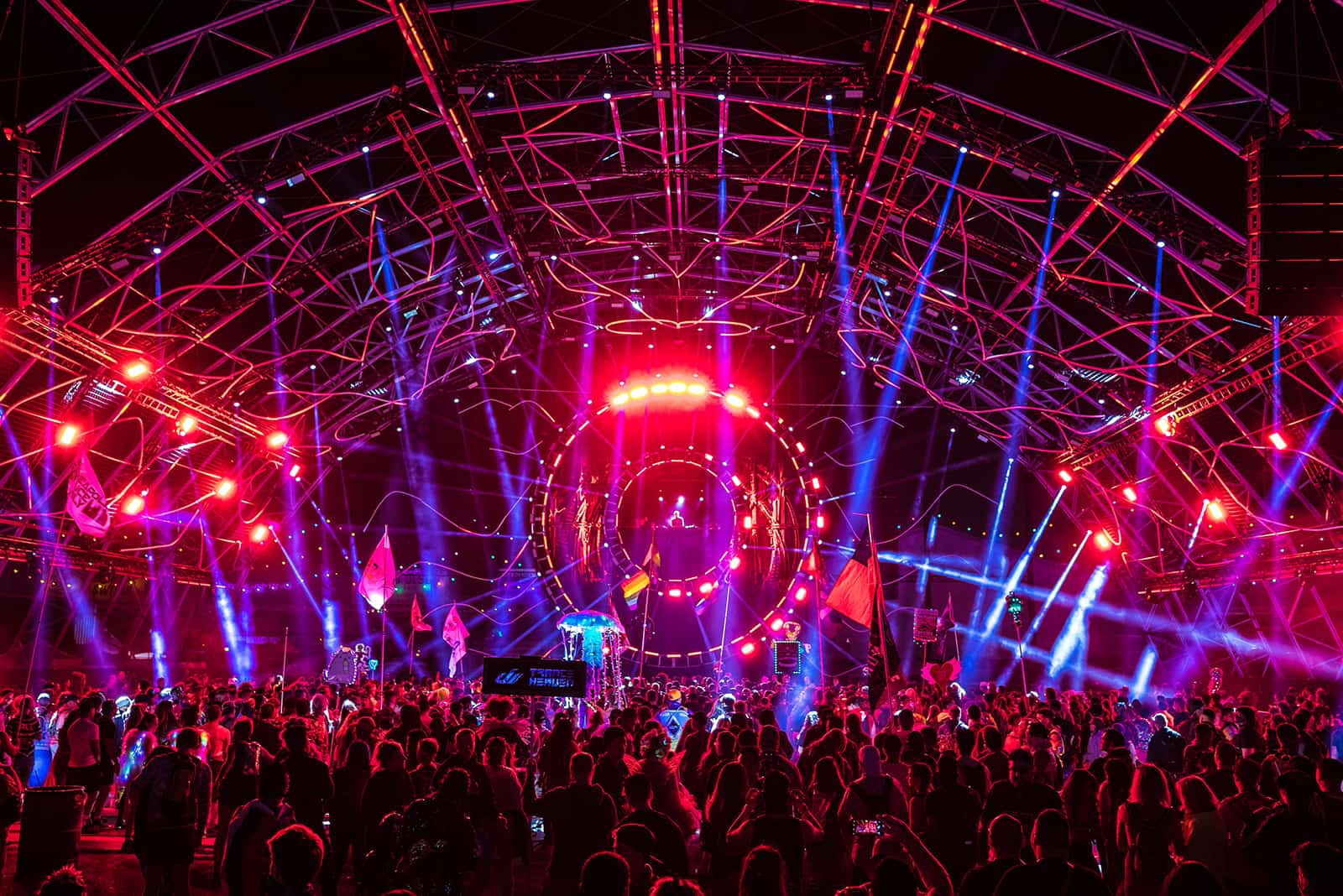 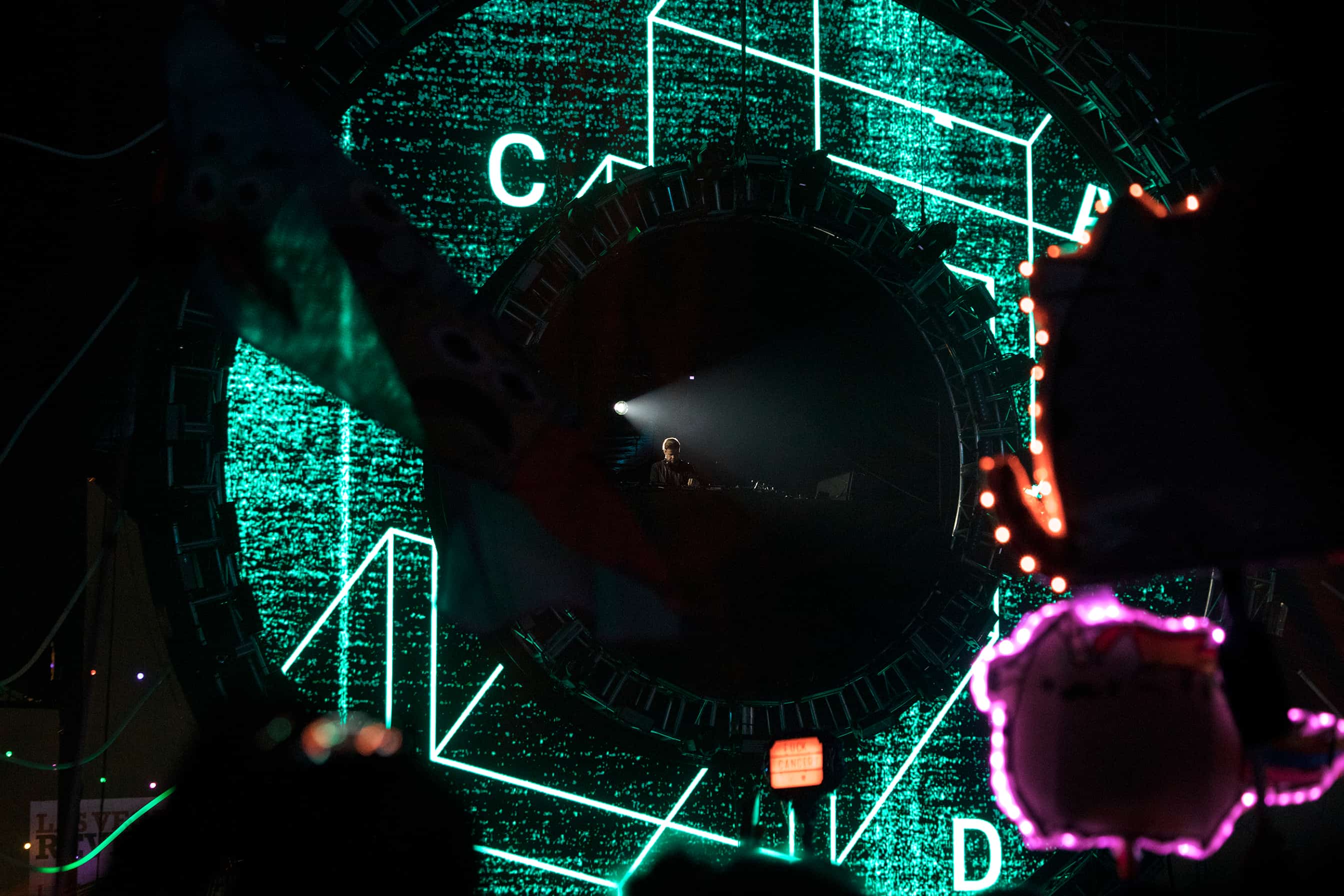 An EDC veteran, Ferry is no stranger to the festival, having been there since the very beginning. "I've seen [EDC] grown over the years and it's really cool," he shares of his experience. "They brought it from an 8,000 person one-day event to a three-day festival in Vegas—yeah, it's amazing."

While the main stages were unrivaled in its girth and production prowess, one stage in particular, matched its brethren in popularity. An onsite oasis, the Corona Electric Beach stage is an activation ground that featured palm trees, beach decor, a Corona-stacked bar, with giveaways, body painting and more—a full-fledged island in the midst of the EDC landscape. Consistently jam-packed, the crowd at the Beach was a one that held fast to Corona cans and wore floral prints, vehemently rising to the occasion in front of the lightning-struck stage. 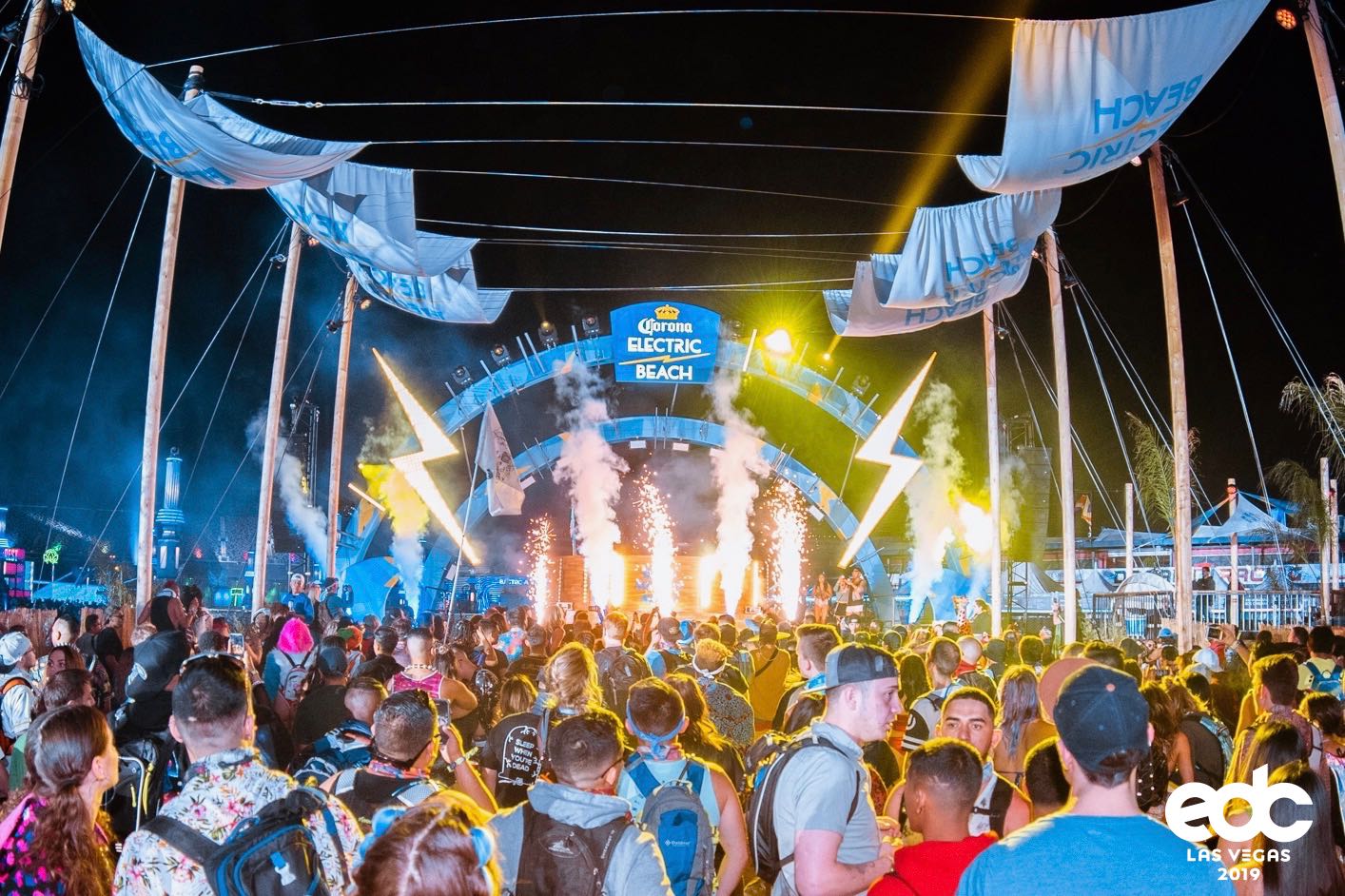 With a VIP section of its own, and a wonderful host, I had the opportunity to take a tour of the stage whilst Party Favor and Elephante played, offering EARMILK's Instagram followers a chance to see them mix up close and personal. An all-around infectious playground of dance music and crackling fireworks, the Beach was definitely one of the places to be during the three days. 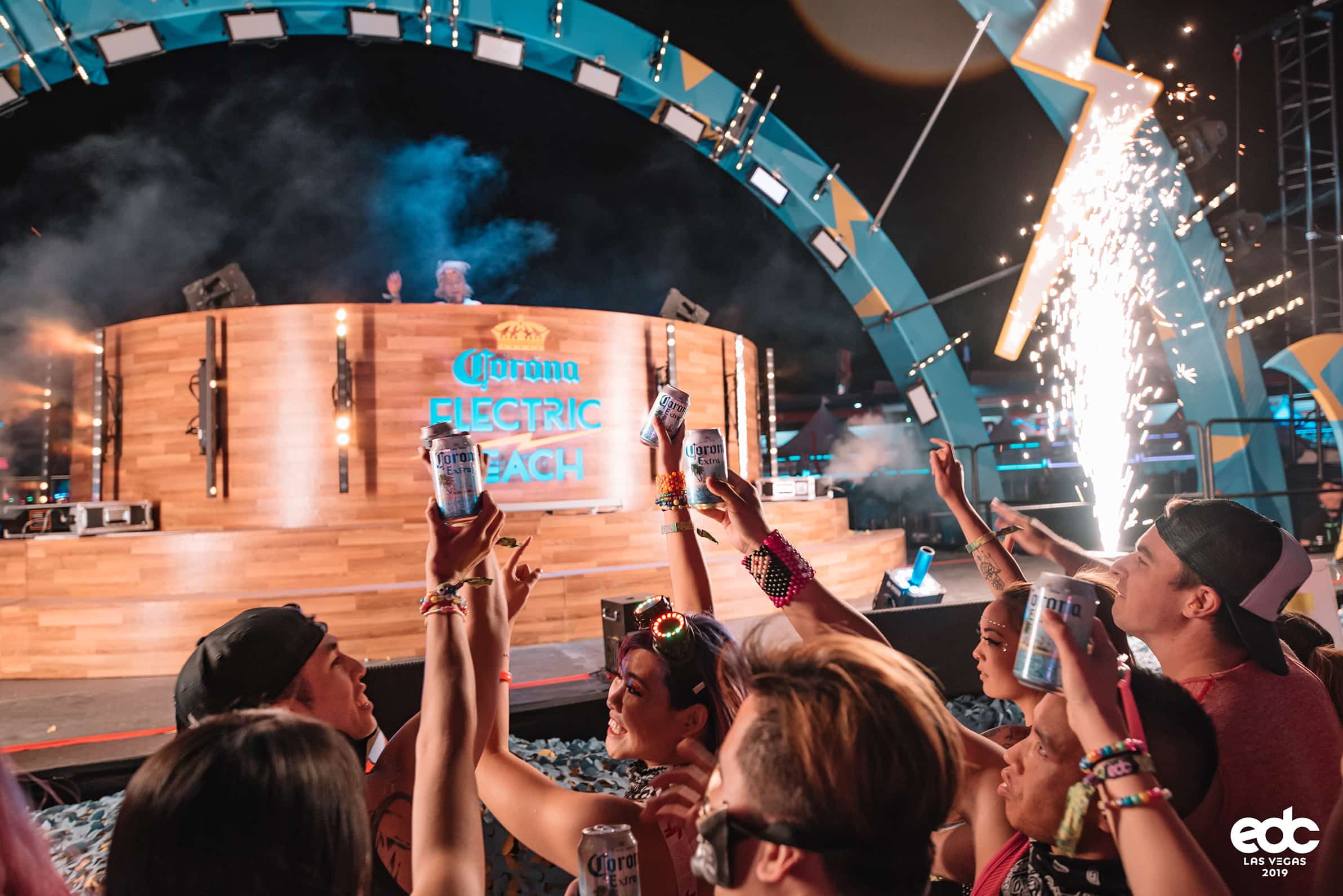 An important yet overlooked contribution to EDC was the art cars. Sprinkled throughout the grounds, these roaming Burning Man-inspired vehicles were a small, intimate stage of their own. Boasting lineups of both upcoming and headlining artists, each masterfully crafted stage was a stunning standalone piece of art and engineering. Art cars provided solace in times of wind and a gathering place for those who sought a different yet inquisitive listening experience. 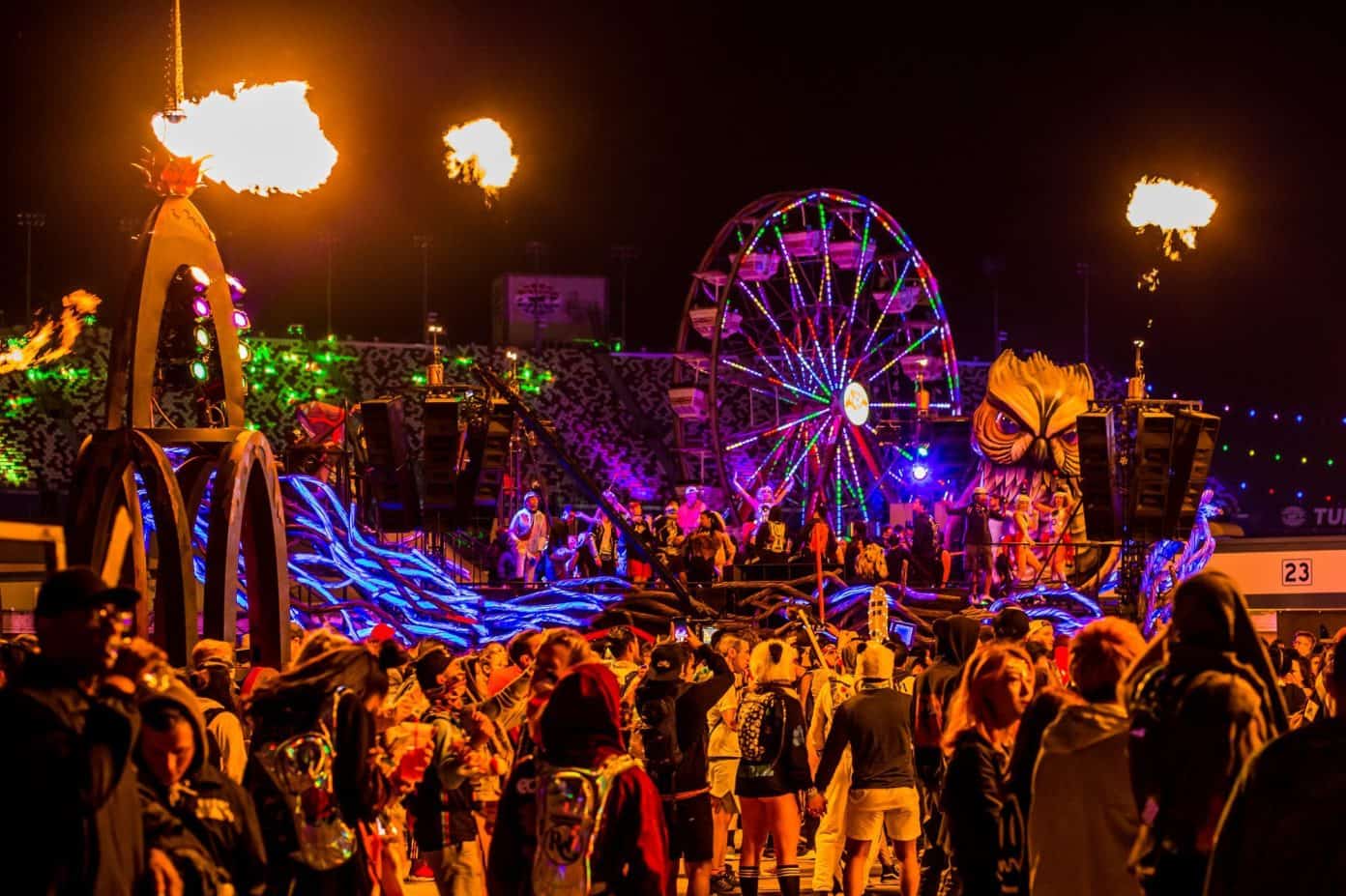 Without a doubt, EDC Las Vegas is a must for any dance music fanatic. While there were hiccups along the way and slight sound bleeding from neonGARDEN to quantumVALLEY, overall, the festival offerings continue to exceed fan's wildest imaginations. Its upgraded VIP offerings allowed for a more comfortable experience (for those willing to pay) whilst in general, GA attendees were still greeted with a loving experience like the years before. Moving the dates to May was indeed a sound move and though the nights were uncharacteristically chilly this year, it was still a welcome change to the sweltering heat from the past.

Every stage was impeccably executed, providing a notably authentic experience in the world it touts. Ethereal and illuminating, the neons of EDC and the feather-clad, glittery-faced performers provided a narrative like no other; year after year, Insomniac outdoes itself with the stages, the organization, and an overall ambiance that provides no shortage of fairytale reverie. Indeed, EDC Las Vegas continues to cement itself as the place to be for those summer months, one that welcomes all under the umbrella of its electric sky.

For those who missed out on EDC 2019 or for those reminiscing, check out the official curated Insomniac playlist below. Additionally, head over to EARMILK's Instagram for our EDC highlights.