11 months ago by Valeria Kolomiets

Boise, Idaho is not a place that is usually synonymous with innovative or leading entertainment. But the Treefort Musical Festival, a premiere music, arts, and film festival, changed all that when it first touched down in Idaho's capital eight years ago. Sponsored by Idaho Tourism and Boise State University (among many other local establishments), the festival integrates fully with the sleepy town for five days in March, shutting down main roads and making use of almost every downtown venue. Creating an experience that not only feels intimate, but respectful of its surroundings.

Unlike most music festival lineups that you will start being bombarded with over the next few months, Treefort prides itself on offering up a selection that is curated for the adventurer rather than the radio listener. With slick headliners like Japanese Breakfast and Omar Apollo, it also diversifies by showcasing local (including Portland) talent, such as The Chromatics and The Shivas. 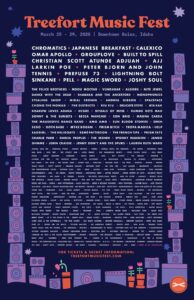 The festival will run this year from March 25- March 29th. Over 100+ acts were added to the lineup today, including Calexico and Grouplove. Tickets start at $210, with various options available, and kids (12 and under) can even get in for free.