10 months ago by Jason Heffler

As if Las Vegas couldn't coax you into its wallet-emptying web of debauchery any more, Life Is Beautiful is right around the corner. The festival, taking place in downtown Vegas, has long been championed for its incredible, diverse lineups, and this year is no different. Featuring heavyweights like Chance The Rapper, The Black Keys, Post Malone, Billie Eilish, Vampire Weekend and many more, the lineup is downright staggering, so we're here to highlight 5 artists you simply cannot miss. 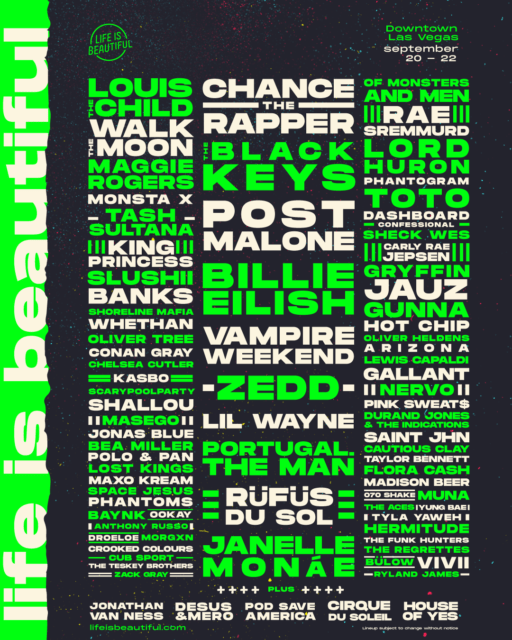 Jamaican-born future soul prodigy Masego is one of those artists that turns you on to music you never thought you'd like. His seductive sound, marked by a buttery blend of funk and R&B, is akin to the decadence of chocolate mousse and Johnnie Walker Blue. No song epitomizes that more than "Tadow," a sultry collaboration with FKJ that deservedly rocketed him to prominence. You can catch him ripping the saxophone at the Huntridge Stage on Sunday, September 22 at 7:05pm.

Pending a DNA test, I have the hypothesis that Gallant is half human, half songbird. This guy's voice is - for lack of a better term - on another level. The music world has noticed, too, as he has an extremely diverse catalog of collaborations with the likes of Jhené Aiko, T-Pain, Sufjan Stevens, SG Lewis and The Knocks, among others. Head over to the Huntridge Stage on Sunday, September 22 at 8:40pm to melt away under the palpable aura of Gallant.

Perhaps best known for her viral, breakthrough song "Alaska," which famously left Pharrell speechless during an NYU masterclass in 2016, Maggie Rogers is a force to be reckoned with. She released her debut album Heard It in a Past Life in January of this year via Capitol Records, which perfectly showcased her genuine songwriting and hypnotic indie-electronica flair. It also spawned the breezy single "Fallingwater," which still makes my jaw drop to this day. If you haven't seen the Pharrell clip yet, I suggest you watch it. It's a fascinating, early glimpse into an unheralded, innately gifted talent who is now quickly transforming into a bona fide superstar before our eyes. You can see for yourself at the Downtown Stage on Saturday, September 21 at 6:00pm.

At 20 years of age, singer-songwriter King Princess has barely scratched the surface of her artistry, which is a scary thought. Her stunning debut single, "1950," channels the sincerity and elegance of someone who sounds like they've been making music since... well, 1950. Identifying as genderqueer and gay, she fiercely supports the LGBTQ community and boasts a voice just as powerful as her convictions. You can catch her at the Huntridge Stage on Friday, September 20 at 10:35pm.

In 2015 I was walking through Electric Forest, on the hunt for chicken tenders per usual, and I stopped dead in my tracks when I heard the music emanating from a tiny stage nestled inside a nondescript patch of trees. It was a kinetic, carefully-curated blend of glitch-hop and jazz fusion, oscillating between bass music and soul while effortlessly mixing in retro hip-hop. Turns out, it was The Funk Hunters. I've been a fan of the duo ever since, following in delight as they released a slew of originals as well as official remixes for some of the biggest names in contemporary music, like U2 and Selena Gomez. You can catch their set at the Fremont Stage on Friday, September 20 at 3:45pm.