'BEST TEEF IN THE GAME TOUR' TO INCLUDE STOPS AT MADISON SQUARE GARDEN, RED ROCKS AND MORE WITH SUPPORT FROM HIS FRIENDS, THUNDERCAT, EARL SWEATSHIRT, NONAME, MAC DEMARCO, and JESSIE REYEZ

The album is his fourth as the acclaimed artist continues to work his way up the coast. With the announce of the new album also comes news of his biggest tour yet, produced by Live Nation with dates that include Madison Square Garden, Red Rocks and support from Thundercat on the entire tour and Earl Sweatshirt, Noname, Mac DeMarco and Jessie Reyez on select dates (full dates and support below).

Tickets for the tour go on sale to the general public beginning Friday, March 8th at 10:00am local time at LiveNation.com. Each online ticket purchased will include a CD or digital copy of the new album, Ventura. To ensure tickets get in to the hands of fans and not scalpers or bots, the tour has partnered with Ticketmaster’s Verified Fan platform. Fans can register now through Saturday, March 2nd at 10:00pm PT here for the Verified Fan presale.  Registered fans who receive a code will have access to purchase tickets before the general public from Monday, March 4th, at 10:00am local time through Thursday, March 7th at 10:00pm local time. American Express® Card Members can purchase tickets in select markets before the general public beginning Tuesday, March 5 at 10am local time through Thursday, March 7 at 10pm local time. Additionally A limited number of LaneOne Premium VIP Packages will also be available, including amazing seats, transportation, preferred entrance and more.  Check LaneOne  for details.

With 2018 came the start of these next chapters in Anderson’s much-celebrated career as we saw the release of his critically acclaimed album Oxnard with it’s single “Bubblin” that went on to win him a GRAMMY for Best Rap Performance, a coveted debut slot on Saturday Night Live performing “Tints” with special guest Kendrick Lamar as well as “Who R U?” and a flurry of press accolades and opportunities showcasing Anderson’s talent and personality (a rare couch spot on Fallon starting off 2019 for example).

The Oxnard album marked a career high for him debuting as the #1 Independent album in the country according to Billboard as well as debuting at #5 on the Rap chart, #6 on the Hip Hop/R&B chart and #11 on the Top 200. The phenomenal album was executive produced by Dr. Dre and features the likes of hip-hop legends Kendrick Lamar, Snoop Dogg, J. Cole, Q-Tip, and Pusha T. Following the album’s release, .Paak has been on a sold-out tour in both the US and Europe, with fans anxious to see his energetic and captivating live performances. 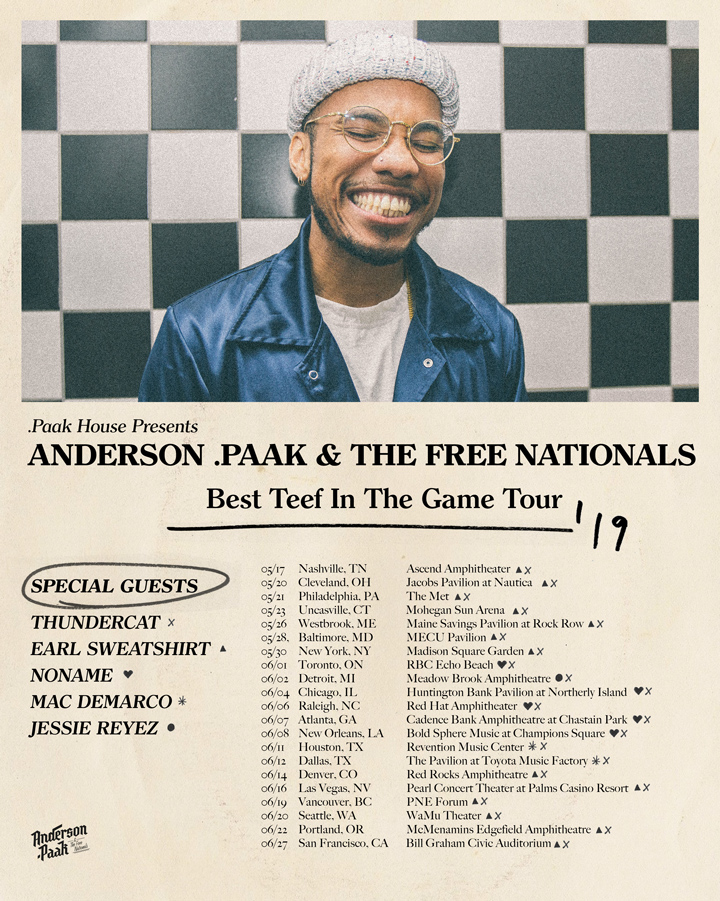