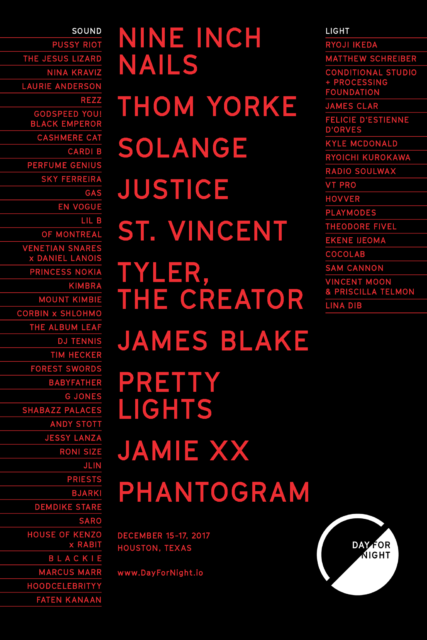 They did the damn thing.

Day For Night, a third-year audio/visual concept festival in downtown Houston, is rebounding triumphantly from a dramatic 2016 iteration with an attention-grabbing 2017 lineup featuring names like Justice, Nine Inch Nails, and Thom Yorke. Purveyors of art, sound, and aesthetics will return to an immersive experience December 15-17 at a sprawling defunct post office space - now a multi-use entertainment project known as Post HTX. Here's hoping acquisition of the space by developers provides upgraded infrastructure and amenities to support the ambitious scope of the event. A full lineup of art installations join the roster again this year, including multimedia artist Ryoji Ikeda, whose wildly innovative "stage shows" have been exhibited at the Metropolitan Museum of Art, and holographer and laser light artist Matthew Schreiber. New for 2017 is a third day to the previously 2-day city fest, which will provide welcome breathing room to take in more of Day For Night's richly experiential offerings.

Tickets and VIP packages are on sale now.