4 years ago by Lindsay Blair

If you'sid heading down to Miami this week for Art Basel and looking to accompany your art filled days with evenings on the dancefloor than, Miami Promoters III Points have your full week and weekend planned for you. The concert production company which is committed to pairing leading talent, non-traditional venues and artist installations has a super stacked lineup that will keep you up into the early hours of the morning. Over the past three years , the III Points team has brought Art Basel concerts like Jamie xx, A$AP Rocky, fka Twigs, Kaytranada, Kendrick Lamar and more.

Now in their 4th year they are proud to present their 4th annual Art Basel Concert Series kicking off November 30th and commencing on December 4th. Events will take place at two venues including Magic City Studios and The Factory at Magic City. Both venues reside not too far from the South Beach madness in Little Haiti. The lineup is fully stacked to say the least, with artists including James Blake, Nick Murphy (Chet Faker), Mount Kimbie, Young Thug, Todd Terje and more.

Tomorrow Wednesday November 30th, James Blake will get the party started and kick things off with a DJ set that will be one to remember. Earlier this summer, Blake released his third album, The Colour in Anything, featuring notable collaborations with Bon Iver, Frank Ocean and Rick Rubin. Blake will be supported by Airhead, Dan Foat, Klaus and Mr. Assister. Tickets for each individual event are available for purchase and you can grab yours HERE.

To spice up the scene, III Points is bringing in Atlanta-native, Young Thug on Thursday as well. After hitting the road for most of November, Young Thug will take to the stage to show his fans just why they came to see him. Other performers on the lineup include avant-garde hip-hop producer and WEDIDIT founder, Shlohmo, South Florida locals Nick León and INDIGOCHILDRICK. Grab your passes HERE.

As we head into the weekend, III Points will collaborate with local promoters Slap & Tickle to present a special evening with Todd Terje, TEED (DJ set) and Tim Sweeney. Across the street at Magic City Studios, Solomun's own Diynamic label will be celebrating their 10-year label anniversary. (Tickets)

On Saturday, December 3rd III Points Festival alum, Nick Murphy FKA Chet Faker, will be debuting his recently rebranded music, showcasing unreleased sounds from his forthcoming album. Murphy will be supported by Electronic duo Mount Kimbie, who are credited for creating post-dubstep and will be closing out the the exclusive evening. These tickets are selling fast and you won't want to miss it! Also on Saturday you can catch Ibiza residents Tale Of Us, who are slated to bring their forward thinking club concept down to Miami with their debut U.S. show.
If you're still going strong on Sunday, December 4th, III Points are bringing in Acid Pauli for his genre bending party vibes that have been going strong in Ibiza for the past two years, this will also be another Art Basel debut!  Other special guests include Sinopoli, Clara Brea and Guy Laliberte.

III Points is set to make waves this year and you won't want to miss out! We hope to see you there! 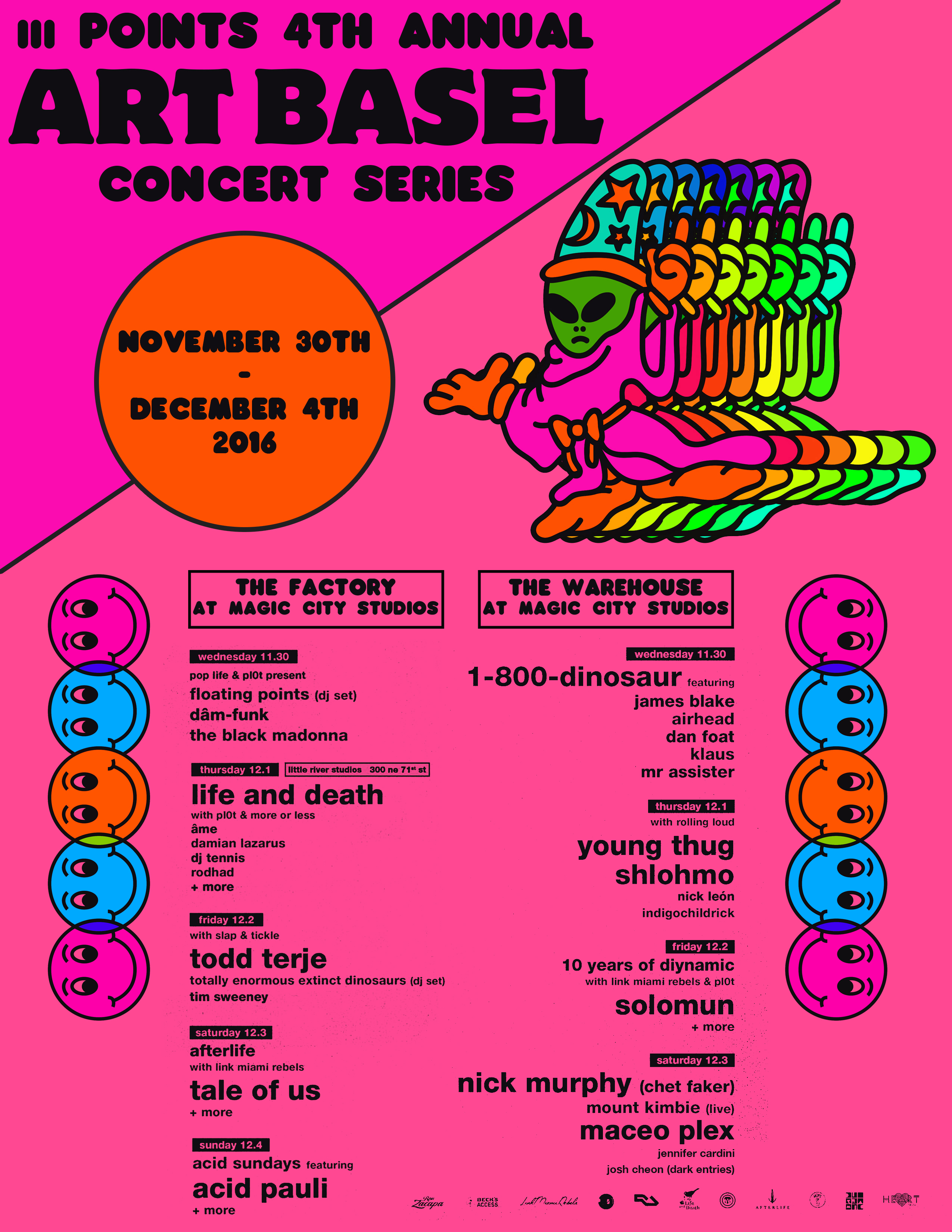