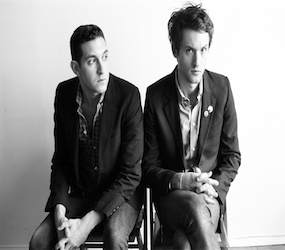 This Friday January 10th the Girls & Boys of New York City's Webster Hall will be bringing in Brooklyn's own synthpop duo Holy Ghost! for a night of boogie and funk. Alex Frankel and Nick Millhiser, better known as the boys behind the DFA recording act Holy Ghost! have been on quite a roll the past year and most recently set the internet ablaze with their remix of Blood Orange's "You're Not Good Enough".

Now the New York natives are not ready to settle on a super hot 2013, but are turning it up in 2014 by kicking off their 8 stop tour this Friday at the famed Webster Hall. The tour will take them from New York to Miami to Chicago and all the way up to Montreal and Toronto. For those of you in the New York City area or nearby we are running a ticket contest for a pair of passes to the event. The DJ's will be playing alongside Girls & Boys residents Alex English and REKLES. And to get you geared up to start the weekly countdown, we leave you a few of our favorite Holy Ghost! tracks for your listening pleasure and to get your feet warmed up for the dancefloor madness. 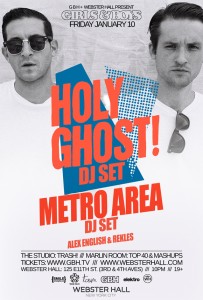