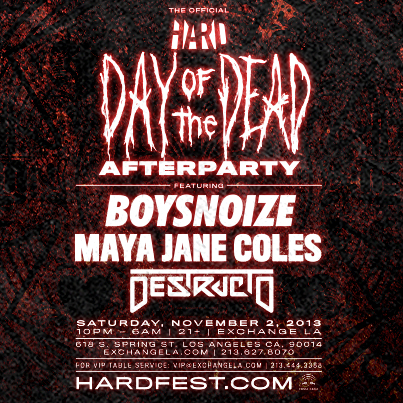 Closing out Halloween Weekend Two will be HARD's tribute to EL Dia de Los Muertos, a frightful, fun-filled festival, nestled in the natural haven of LA's Historic State Park. While the name may at first be deceiving, the adventure actually draws an assortment of electronic artists that touch on wide-ranging genres and fans. If you were lucky enough to catch the HARD stage at EDC Las Vegas, or either day of their summer music festival, then you know that the production value, artist sets, and general milieu will be top notch. Though the show will be sure to impress, patrons who wish to party on have the opportunity to attend a more intimate after party at Exchange LA, headlined by the devastatingly talented Boys Noize and Maya Jane Coles. Links to both festival and after party tickets can be seen below, followed by your chance to get up close and personal with Boys, Maya, and HARD's creator, Destructo (aka Gary Richards) at the very bottom.

HARD Day of the Dead Tickets