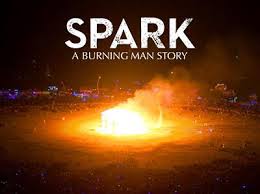 After a bit of a melancholy Labor Day Weekend due to the recent news of the Ezoo-related drug overdoses, it seems many have been left wondering about the future of large music and art gatherings, hoping that they aren't morphing into something more negative than positive. Luckily, we may be able to find some solace and even some inspiration from "Spark: A Burning Man Story", a documentary following the organizers and participants in a cultural phenomenon that has become so much more than the early experiment of "Let's build a statue and burn it". The visually stimulating film follows the story of an art festival that attracts over 60,000 pilgrims to the Black Rock Desert in Nevada. First time filmmaker Steve Brown wanted to take the documentary further by focusing on the work, frustrations and challenges in order to make such an epic event happen.
While The New York Times has heralded watching the movie as the next best thing to actually attending, we are also blessed with experiencing the journey via an original soundtrack album, available digitally on September 17th and physically on October 22nd. The 24 track compilation has a wonderful power within it, adding another layer to the presentation of a very colorful and imaginative environment. The soundtrack is split up according to "Day" which is said to be the tracks with "inspiring lyrics rich in melody and emotion" and "Night" which feature "mature and sexy underground tracks". There are two original theme songs by California native Michael Franti & Spearhead titled "Let it Go" and Australian pop star Missy Higgins called "We Ride". There are also original remixes, inspired sounds and unreleased tracks from big names such as Cazzette, Diplo, and Edward Sharpe & the Magnetic Zeros, all lending to the emotional ride one may experience when entering in to the world of Burning Man. Recalling the words of one of the organizers, this soundtrack is a "cauldron that will cook their souls". Watch the trailer and see full tracklist below.