1984: the Olympic Games are held in LA, President Reagan runs for re-election, the AIDS epidemic runs rampant, and underneath it all, the secret Zombie War rages. One secret soldier is rescued from the fray, his arm gone, but his spirit strong. He is given an experimental lazer prosthetic and hired by the CIA to continue his fight against the forces of evil. He fronts as a dancehall nightclub owner from Trinidad, though in truth, he is a badass Jamaican keeping the world safe from vampires and monsters, while partying hard and tweeting.

Major Lazer Kidrobot is an 7-inch vinyl homage to the renegade soldier turned CIA operative. A collaborative project of the Grammy nominated producer Diplo and DJ Switch, Major Lazer debuted with the album Guns Don’t Kill People… Lazers Do in 2009, followed by Lazers Never Die in 2010. A new album, titled Free the Universe, featuring Diplo as the solo executive producer, is out February 2013. Major Lazer Kidrobot has a uniquely sculpted head and lazer arm to properly capture his eighties commando style and signature prosthetic. The real Major Lazer is hitting the road 2/28 for a 43 city world  headlining tour beginning in Toronto.

Retailing for $50 US, this ‘bot hits the stage February 19 at Kidrobot stores, kidrobot.com, and select retailers worldwide. 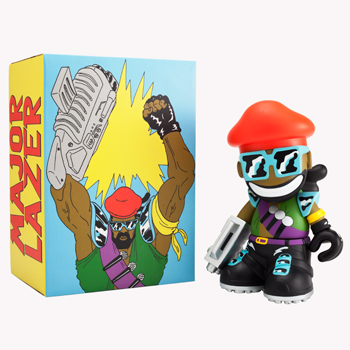