The Oregon Eclipse Festival delivered a performance of cosmic awe

3 years ago by Ryan Rosenthal

The minds behind the Oregon Eclipse Gathering have been anxiously planning, scouting out land and collaborating for this year's event. The momentous occasion was done as a collective of several different festivals who came together from around the globe to unite under the cosmos to celebrate and witness the total solar eclipse on Monday, August 21st. With the actual eclipse happening for just a few minutes, the festival creators intended to produce a unique experience that expanded those brief minutes into a week-long celebration. Festivals such as Symbiosis, Envision, Noisily, Bass Coast, Sonic Bloom, Rainbow Serpent, and our friends over at Do LaB, began brewing an ingenious concoction of creative juices that resulted in one of the most impactful weeks of our lives. I truly had no idea what to expect heading up to Eclipse, but I was ready to have an open mind to whatever was to come.

My crew packed our entire existence into a Mini Cooper while the sun rose over Southern California. Partially nervous, mostly ecstatic, we started our journey northbound to Oregon with the smell of fresh coffee and “St. Stephen” by the Grateful Dead filling the air. Trepidation was the general consensus as this would be a new location, a collaboration of global festivals that have never worked together before, the cautioned lack of supplies, and of course for most us, a first ever total solar eclipse. The total ambiguity of an event like this and our own naiveté felt ominously thrilling.

Communicating with a fleet of 14 cars via walkie-talkies made us feel like kids again as we entered the festival, giddy in anticipation and laughing at jokes cracked over the radio. Once inside, something about it being a week long as opposed to the typical 3-day weekend festival setup compelled us to set up a more intricate camp. Canopies, tents, tapestries, tables, and chairs came out in abundance. A few beers later and suddenly a small city had been constructed in front of us. Proud of our residential accomplishments we put on our bandanas and began to roam the festival grounds.

Each and every detail put into this festival blew me away. It was immediately understood that Eclipse was going to be an unparalleled festival outside of the musical lineup. Attention to detail came in every form to even small antique-framed Wild West paintings hanging backstage attached to trees in the woods made me laugh, no one understood them but their quirkiness was appreciated. 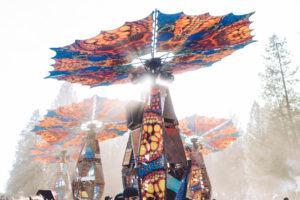 Another major attraction to combat the high summer temperatures was the lake offering. It offered the opportunity to take a dip, ride a canoe or lay out on a giant inflatable Rubber Ducky while various make shift sound stages and art boats surrounded every inch of shoreline, creating an aquatic community that joined together in the celebration of music and art. Everything offered within the festival had a strategic but DIY feel that invited participants to narrate their own adventure. 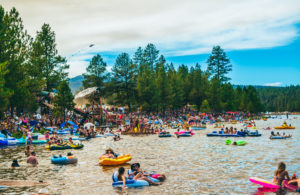 Then there were the numerous sound stages. The Sky Stage was home to house and techno, with a beastly lineup that included a Desert Hearts 6 hour takeover, one Dirtybird-filled afternoon, and a pre-eclipse sunrise set by Damian Lazarus. The stage presented itself as a wooden flight simulator, laddered with wood and windmill propellers that spun as the wind gusted through the stage. Next to this was the Moon Stage, where we explored the sounds of bass music, which provided a relentless flow of experimental mind-melting from The Gaslamp Killer, G Jones, and K+ Lab, in addition to a not-so-secret set by none other than Bassnectar. The stage was shaded with gigantic psychedelic umbrellas, designed with intricate patterns that beamed light onto the dance floor once the sun was set. Seeing only two stages so far, I was eager to explore the rest of the festival. Interestingly, the stage that impressed me the most, both musically and artistically, was the Sun stage. The Sun stage was the land of psytrance, a genre that I am not used to listening to but was opening to fully experiencing. Seeing Grouch, the New Zealand based psy-tech producer, got me hooked to psy as I watched the colossal crowd of Brazilians and Australians going absolutely savage to the high-tempo weirdness while the Funktion-One speakers infiltrated the masses. I swear, I lost 300 calories per minute at the Sun stage… The stage had the same setup as Desert Hearts with elaborate designs of wooden psychedelia, but added the Brazilian style sun-colored canopies that sheltered the crowd. With a few more stages and countless small sized pop-up stages to go, I was mesmerized with how detailed Eclipse curated their lineup. 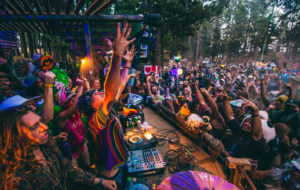 With a week of time, they somehow managed to have music consistently playing around the clock at mostly every inch of the festival. Burning Man, another weeklong festival, doesn’t book any musical artists or provide a music lineup, but instead, focuses on art stages that are spontaneously planned with an assortment of artists that volunteer to play. That being said, Burning Man has created an experience where it’s possible to stumble upon something entirely on accident, whereas at Eclipse, you always knew there was an underlying structure behind the lineup. However, I barely looked at a schedule, as most of what I saw was still at completely random and communicated through word of mouth.

A bus sat in the distance as we meandered toward the lake. It looked like Ken Kesey’s bus, “Further,” from the ‘60s. There was no way. In the midst of the 60’s, Ken Kesey and his friends, dubbed The Merry Pranksters, purchased a 1939 school bus with Ken’s earnings from the publication of his best-selling novel, One Flew Over the Cuckoo’s Nest. They were the crew behind The Electric Kool-Aid Acid Test, which hosted bands such as The Grateful Dead and inspired The Beatles with their Magical Mystery Tour bus idea, ultimately fueling a generation of LSD inspired art, music, and culture. That bus belongs in a museum, one of the most influential symbols of the counter culture movement couldn’t possibly be here in the dust with us. And yet, as we neared, here it was standing before me within the walking paths surrounded by kiosks and workshop stages.

As Saturday morning came around, the weekend warriors came out to play. We first got wind of West Coast DJs, Fritz Carlton and Lubelski, were playing a B2B set on an art boat installation floating on the lake. Fritz and Lubelski are regulars in the LA house and techno scene, creating an infamous 2 am style sound that has made reigns at festivals like Desert Hearts where they’ve consistently secured the 2 am Monday morning slot for the past few years. As they rarely play day parties and weren’t listed on the normal music lineup, we frantically gathered our belongings and marched over to one of the most memorable days of the week. As my friends do best, we popped champagne and listened to funky techno as the sun glistened over the lake. 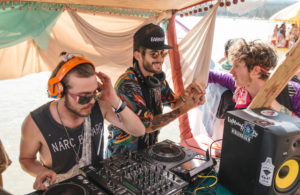 Eclipse provided a platform for their visitors to explore the deeper meaning of life, music, art, nature, and spirituality, in a uniquely different way compared to most festivals. It felt like what I imagine Woodstock was like. Although Eclipse focused on an elaborate lineup almost as much as a festival like Coachella might, it was the entire experience that transcended this festival to limits, expanding far beyond the music lineup.

The morning of the Eclipse was mystical in every sense of the word. Mikey Lion, the label boss behind Desert Hearts, and I managed to deter from our typical music based conversations to discuss the strangeness of our universe and the deeper levels of how music connects us as the rising sun began to peek through the trees of the Sky stage, and beam rays of light through the dust of the dance floor. Shortly after, multicolored hot air balloons in the distance began to take flight as the whole festival began to prepare itself for the approaching Eclipse.

Swarms of gatherers emerged from the campsites and collected out in the open fields to cheer as the moon moved closer to the sun. For those minutes, it felt as if we were truly the universe witnessing its own beauty, connecting each of us on a cosmic level. As my mind wandered, I kept thinking of the quote, “we are the frontal lobes of the universe, we are the eyes and ears, and we are a way for the cosmos to know itself.” 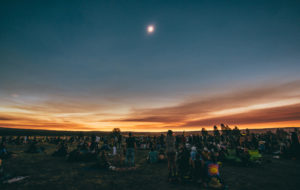 Post Eclipse, I was expecting the inevitable come down that follows any remarkable moment. Humans are hedonistic in nature. The higher the peak of the experience, the harder we fall when we come back to reality. Yet, my expected sadness after the Eclipse never came. What do you do after a cosmic experience? Typically, we would leave a music festival and solely look forward to stopping at an In N' Out before returning to our everyday lives. But this time, I found myself entering a state of eternal cosmic awe. This was something I feel like only a festival like Eclipse could have provided, given that no other festival has a solar event of that magnitude as one of its main features. Burning Man may have LED’s, Coachella may have their pricey headliners, EDC may have their fireworks but Eclipse had the power of the cosmos.