Another show cancelled at Depot 52, Axwell /\ Ingrosso moves to Terminal 5

Earlier in March, fans were stunned when Eric Prydz's show at Brooklyn's Depot 52 warehouse was cancelled merely minutes before his set time was slated to begin. With details on the cancellation still murky, Prydz fans are still confused about the show's abrupt cancellation. Today, the venue has lost another show, but with more leeway for fans to adjust their plans.

Swedish dance duo Axwell Λ Ingrosso were set to play the Brooklyn venue for two nights this weekend, but as announced today, both Friday and Saturday shows will be moved to Manhattan to Terminal 5. While the show will not quite have the same warehouse vibe, it will go on at one of New York City's most iconic concert venues.

Posing further questions as to what will happen to Depot 52's lineup of upcoming events throughout the spring, including the Anjunabeats tour stop in April. But for now Axwell Λ Ingrosso fans can enjoy their show as planned, with doors at Terminal 5 opening at 8. Further information on tickets can be found here. 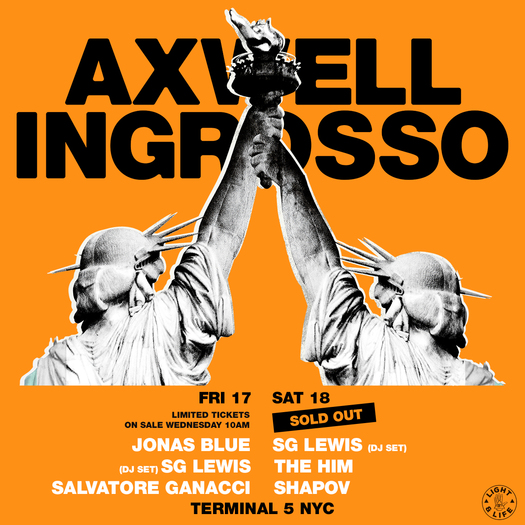