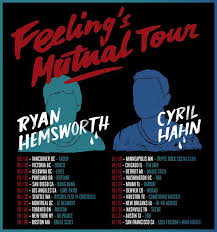 Swiss-born, Vancouver-based electronic producer Cyril Hahn began the North American "Feeling's Mutual" tour this week in Vancouver joining forces with fellow Canadian producer Ryan Hemsworth. Hahn rapidly hopped on the internet radar last year when he released a remix of Destiny's Child's "Say My Name", which has climbed to over 2.5 million plays on Soundcloud. Not to mention his noteworthy edits of Solange's "Losing You", Jessie Ware's "Sweet Talk", and Haim's "Don't Save Me". As he continues to rise, Cyril released his first track of the summer "Perfect Form" featuring Shy Girls on UK tastemaker label PMR Records, hoping to bolster some excitement for his debut EP dropping on October 21st. Stay sharp this Fall and grab a ticket to the "Feelings Mutual" tour, which will be touching down in 22 cities across North America, with a grand finale at HARD Day of the Dead. See dates below, and enjoy an exclusive stream of the new mix tape now on Vogue.com.