8 years ago by Logan Irish

On Wednesday, July 17th, Embrace Boston, a large booking company normally hosting drum & bass and dubstep shows, presented Hudson Mohawke (signed to Kanye West's G.O.O.D. Music, and one half of TNGHT) to the good ol' college capital of the world, Boston, MA. It was nights like this where I wished I had lived in a city like New York where there would be more of a general, accepting crowd rather than the molly-induced teeny boppers that flock to the next big all-ages "rave" show.

Standing in line, I knew I was in trouble when a passerby walked up to me asking "Is this the line for the trap?" I was utterly stunned. I knew what he meant, but to hear it in that exact context was kind of embarrassing. Afterwards, I had a good laugh and continued on inside. 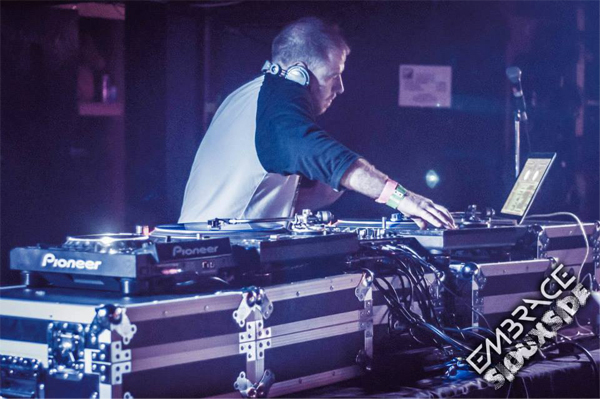 I showed up early because I wanted to catch the first opener, DJ Frank White, a local legend who's flat out a pure turntablist. He seamlessly played out an all classic hip-hop set that was as clean and intricate as I have ever seen. Hudson Mohawke even walked out of the green room during Frank's set and paid his respects, as well as on the internet... 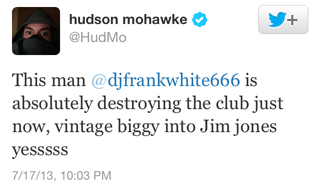 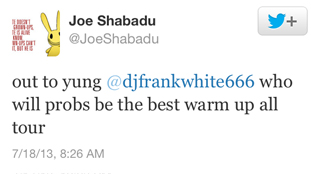 By the end of Frank White's set, the crowd had filed in and were revving to party. Before HudMo, though, was Joe Shabadu, a manager for LuckyMe and Vase records and close friend of Hudson's. Joe instantly chilled the crowd out, playing amazing tracks that had me wondering what on Earth every song was. The beats were wonderful, yet mellow. It was obvious the majority of the crowd was not vibing, but I loved it. You had to respect the fact that he was simply playing for himself, great music even if it wasn't the majority choice. But in Boston, it's hard to find a crowd that accepts the experimental, creative side of music and also sells tickets.

Hudson Mohawke showed up on stage to cheers from the crowd as Joe was finishing up his last couple songs, readying to transition into his own set and what looked like just to hang out with his friend for a couple of minutes. His first song was Kanye, no surprise there. I don't live under a rock, I know Yeezus came out, but I will honestly say that I'm not a huge fan of him or his music so I haven't listened to the album. I'm actually just waiting for the instrumental version (or so I say).

HudMo's set included a mixture of Kanye, every TNGHT song, and a couple older solo tracks. "Cbat" live made it all worth it for me. I especially found it funny when he absolutely killed the crowd's vibe by singing along to (apparently) an old sample used in Yeezus. Towards the end of Hudson's set, he was running around stage, sipping champagne, and looking rather tipsy. Maybe there was a little something heavier in that champagne, who knows. The entire set was done in complete darkness, a personal preference for the audience to actually be forced to listen to the music and not get lost in the on-stage spectacle that most DJ shows have become. 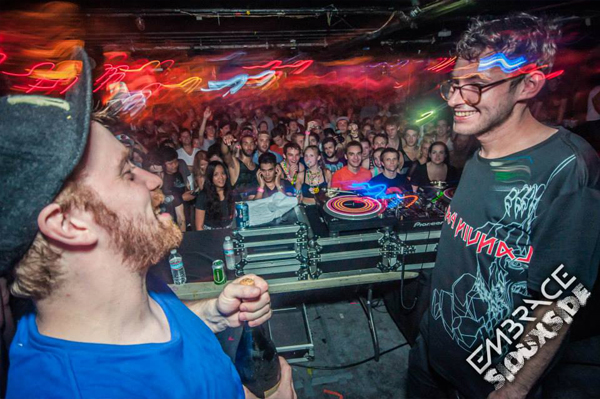 All in all, the show was good. Every DJ threw down. I wish that Hudson Mohawke could play more of an original set with some exclusives and tracks that we all haven't heard a thousand times. But again, it's Boston, and I might just be a minority in this case. He played to the crowd, as any great DJ should do. Whether the kids know the song or not, if its good, they will always be down. Or at least that's my philosophy.