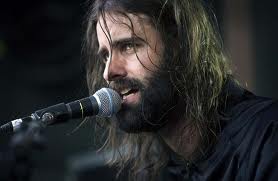 Last weekend, New York City turned into a mini music marathon when Downtown Festival took over the Lower East Side. In a similar fashion to CMJ and SXSW, the Downtown Records label invaded venues like Capitale, Element, Mercury Lounge, Bowery Ballroom, Pianos, and Cake Shop, to bring fans an intimate showcase unseen in New York City. Calling it, “unlike any other festival of it’s kind, the focus of Downtown Festival is on providing the audience with the most intimate, rewarding concert experience possible, keeping fans up-close and personal with the rising artists they love.” I kicked off Friday evening with Andrew Wyatt and his 20-piece orchestra for his only scheduled live performance at the opulent Capitale building on Bowery.

If you aren’t familiar with Capitale, it is the old Bowery Savings Bank that is truly a spectacular venue unlike anything I’ve been to in New York. With 65-foot ceilings, towering Corinthian columns, and picturesque marble walls it proved the perfect event space for Mr. Wyatt and his accompanying orchestra. Wyatt, the front man of dance pop trio Miike Snow, has been extremely busy working on his solo album Descender, which he released last April on INGRID/Downtown Records. (He was the only artist at the festival with an official relationship to Downtown Records.)

Taking the stage donning a leopard printed button up and a less than proper look, Wyatt debuted new tracks from the album, including “Harlem Boyzz,” “In Paris They Know How to Build a Monument,” “There is a Spring,” and “She’s Changed.” He also played the beloved Miike Snow track “Animal,” which still proved to be a fan favorite. Featuring some very special guests including Sean Lennon and Joan Wasser aka Joan As Police Woman the entire performance was something out of the ordinary. Mr. Wyatt engaged with the crowd from start to finish, sharing little tidbits on each and every song. From him we find out that some of his tracks have deeper and darker messages, like “Cluster Subs” which tells the story of a kid looking back on his life after he was killed. His haunting vocals echoed in perfect harmony with the sweeping string arrangements in the backdrop.  For his final song he brought out Joan as Police Woman for “God Help This Divorce”. This was the duo’s first time performing the song together, which made their interaction and chemistry very genuine. As an album, Decender is a 32-minute meditation journey into the darker side of the powerhouse front man. A slight departure from his Miike Snow days, we take a journey into an introspective setting with complex soundscapes enhanced by Prague’s Philharmonic Orchestra.

While the intimate performance was certainly a treat, you can check out Wyatt’s documentary on the making of the album. Offering a compelling look into the aesthetic and process of making Descender. In collaboration with The Creators Project, the documentary is more than just a Web episode. Directed by Sebastian Mlynarski, the film focuses on Wyatt’s distinctive versatility as a songwriter. Appropriately named "Descender," the film offers a distinct peak within Mr. Wyatt’s music career, like his work with artists like Carl Barat and Mark Ronson, his time in Miike Snow, his studies in classical conservatory (which hatched his collaboration with the 75-piece Prague Philharmonic on the album), and the experiences that lead to his growth as a songwriter. Thanks to Mlynarski, the documentary is striking in its direction and style, encompassing what it is to be human in an incredible world while displaying a humbleness that makes it easy to relate with the artist’s music and his struggles. Taking us from New York to Prague, we find out that Wyatt gave himself just one month to record the entire album. After booking the orchestra and sending the transcribed music, Wyatt finds that his transcriptions were slightly unfamiliar to the orchestral musicians.  The orchestra conductor remarks, "I have serious concerns and worries. If we make parts from these scores, nobody will be able to read them. Maybe we should put these sessions off." This is where the documentary begins, while he takes us through the streets of Prague and into the recording studio. Making a quick stop in Kutna Hora, where we find the home to a small Roman Catholic chapel located beneath the Cemetery Church of All Saints, called Kostnice Ossuary. The church contains the skeletons of between 40,000 and 70,000 people whose bones have been artistically arranged to form decorations and furnishings for the chapel and it is here we find Andrew reflecting on the album as being "the ruins of my grand ideas." I sincerely hope Wyatt plans on an upcoming tour, but in the meantime you can buy the album, check out the documentary and current video for his first single “And Septimus.”