12 months ago by Jess Bartlet 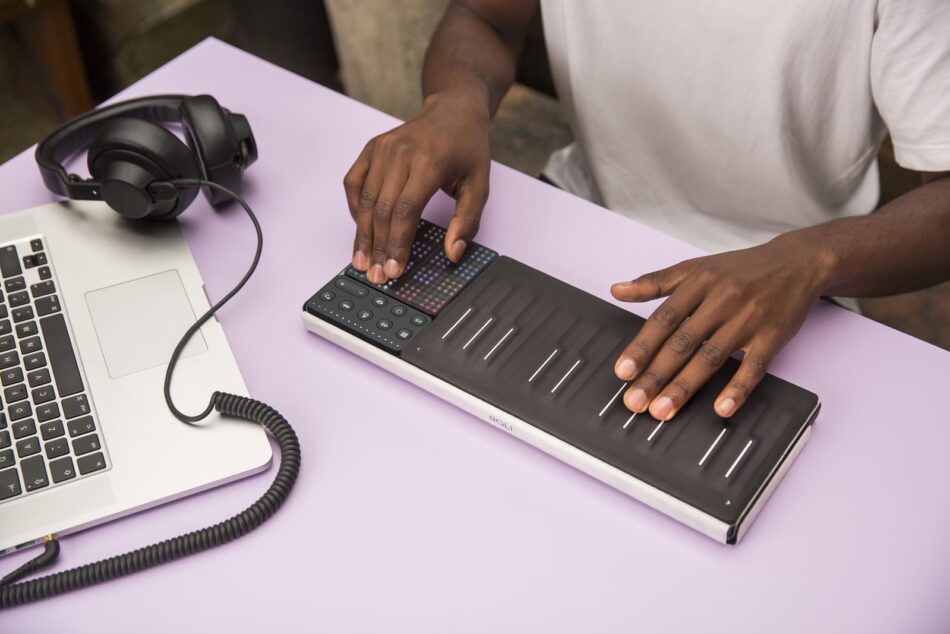 London based ROLI are known for their highly expressive 5D technology, as well as their legendary Seaboard. In truth a lot of their midi expression, and programmable sensitivity remains unparalleled. Especially in comparison to other electronic keyboards.

Perhaps the closest definition of the Seaboard is being an electronic counterpart to the piano in its truest mechanical sense. As a result the Seaboard was incredibly forward-thinking for its time. In fact, composer Hans Zimmer called it "the piano of the future," and other futurist collaborators including Grimes followed suit - designing an exclusive, free sound-pack "Electromagnetic Pulse". The sleek, responsive, and continuous surface silicone technology set the Seaboard apart from competitors, and it was an overwhelming success. Ever since then ROLI have brought their 5D touch technology to other products, and then created their modular BLOCKS series.

However, the Songmaker Kit Studio Edition is their latest set of products. Amongst becoming a gateway product for budding producers to play, and trial out programming and customisation. The Kit also serves other purposes. Namely their modular functionality makes it easier to build upon expressive loops, and create live performances. As it's close to Christmas, and the Kit clocks in at £599.95 we will dive into the product to see what is included at that price.

There is really something for everyone in this bundle. An eclectic and versatile mixture of hardware and software ensures that not only are the BLOCKS cheaper than if bought separately, but everyone is going to have a variety of take-homes with the Songmaker Kit. For me personally, as a producer, there are a few absolute highlights. That being said it does very much depend on exactly what you are after and it's important to do your research. Overall though there are some clear advantages to the Songmaker Kit rather than the individual BLOCKS.

Here are three reasons in ROLI's own words about why having modular BLOCKS together beats them separately:

A quick highlight of all of the individual units and software together also means that you would get the following:

The Seaboard and Lightpad BLOCK are by far the most hi-tech of the hardware BLOCKS and so we will go into some more detail about what these can do. The live BLOCK adds flair into the other blocks by DNA connectors between the BLOCKS, but essentially cannot really be played without at least one of the other BLOCKS. All the BLOCKS must be connected digitally through synthesis in the provided software. Whilst this could be seen as a limitation in the hardware; this allows for greater customisation and integration of each BLOCK, as well as meaning they are compact and quickly portable with a handy iPhone or iPad.

The first highlight as a producer and a pianist is playing the Seaboard BLOCK. In and of itself, it is remarkably affordable too. It comes equipped with all of the excellent, super-powered expression of ROLI’s award-winning Seaboard. It's the perfect introduction into MIDI. For music makers starting out from scratch with the BLOCKS, it could also be worth considering some of the other ROLI products such as the Seaboard Rise or even the Grand down the line.

For producers more serious about production and already familiar with using studio ready MIDI keyboards it could be worth purchasing the VST updates for your DAW of choice. Some incredible parts of this accessible BLOCK include being able to use unique 5D FXPansion software such as Cypher, Strobe, and Equator.

The Lightpad BLOCK allows an easier bend and shape to producing drums than most predecessors or competitors. It's easy to build up tracks, all at the touch of a finger. In regards to the Lightpad, the bundle contains the first ever solely dedicated MPE drum software. As well as other ROLI Studio software providing a never-ending catalogue of sounds. Basically, it will keep you very busy with all of the choices you can make.

On-boarding with the BLOCKS:

The BLOCKS themselves are some of the most intuitive products around. The set-up generally is very simple and there is not a lot of information needed nor included in the quick start-up guide.

Some of the BLOCKS have old firmware. Once all of your BLOCKS are on firmware v.0.4.5 you should have no problems going forward. Most of this is possible using ROLI Dashboard, which is where almost all of the customisation of each BLOCK takes place. Sometimes if the firmware is very old, however, it also requires going into the Audio/MIDI set-up of the computer.

Double-check the compatibility of the BLOCKS with whatever you are planning to use it with. Here is the guide to using BLOCKS with the included expressive / MPE DAW Tracktion Waveform.

Also a note to Ableton users, it works with 10 only, although there are possible rumours that Ableton 11 may be finally building in MPE functionality into the DAW.

Lastly for those keen to use the dedicated NOISE app with iOS. The BLOCKS are not yet compatible with android. ROLI has a dedicated support platform on its website here. We recommend give this ROLI article a quick read as well.

Learning more with the ROLI Community:

The ROLI website includes a learning section for those keen to find out more. Whilst some of these videos could be easier to navigate there are countless videos here to go through different aspects of using the BLOCKS. There is also a ROLI support forum.

We love the versatility and responsiveness of the Songmaker Kit Studio Edition. And, as a result it's immense potential. The best place to buy one is here.