4 years ago by Montrey Whittaker

"Now I'm ready to listen". These are the words I uttered to my friends when the Doppler Labs Here Active Listening ear buds arrived on my doorstep. As an avid music listener, for some silly reason; I have avoided wearing ear plugs when going to concerts and festivals. I have been telling myself that I thought that typical ear plugs looked silly and ultimately drowned out the excitement of music. But, hearing damage is a lot more prevalent and widespread than any of us like to admit —which we covered in our Voices article discussing the dangers of younger and younger people getting Tinnitus(ringing in the ears). But Doppler Labs has sought to eliminate the pain point that many of us have with your standard, complete dampening earplugs that have been available on the market. The Here ear buds have an active listening technology that takes the sounds of the outside world and bends them to the will of the listener. You are able to control the volume, the bass, the mid-range, the treble and independently. Not only that, you are even able to add effects to what you are hearing and color the sound with things such as: reverb, delay, bass boost, etc. Ultimately, Doppler Labs gives you complete control of what sounds go through your ears.

I was a little skeptical about this product because I was worried about the delay in which the product would add to the sound. But after extensive testing, I found that the ear buds added such a minimal delay if at all. Sound is manipulated almost instantaneously and with zero distortion. That makes this product suitable for the casual listener as well as the bedroom producers and mega producers alike. With that being said, let's get down to the nitty gritty.

Presentation:
The ear buds arrive inside of a dual purpose holder. The case works as both a protector as well as an external charging case. You can charge the ear buds, while they sit in this case, while also having the opportunity to plug the case separately to charge itself. So, when you unplug, the case itself is able to recharge the buds 2x faster allowing you to carry them through an entire festival weekend. This makes them incredibly portable and provides the user no excuse from putting their ears in danger due to a dead battery. Each charge lasts roughly 6 hours based on my testing. Also, the case have an aesthetically pleasing white light illumination which adds a futuristic appeal to them. 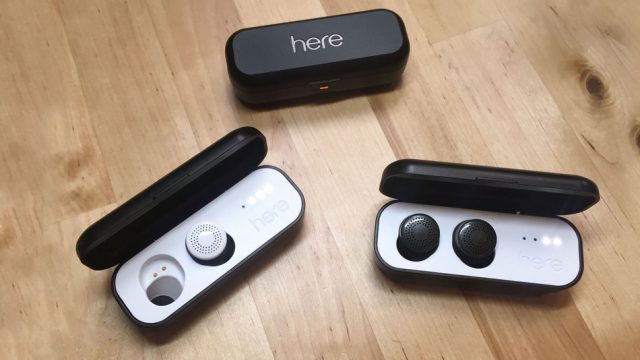 Style:
The ear buds themselves have a round, yet medium sized white(or black) active listening microphone that sits on the outer side of the ear. This part is visible and could potentially be the only deterrent for the listener who wants to be completely incognito. Even though it is visible, the style is actually quite sleek and modern. It looks as though you are wearing a fashionable and futuristic hearing device.

I found the ear buds to conform to the shape of my inner ear really well because  having a complete seal is very important to controlling sound bleed. I had a few friends try them as well and we all were able to quickly get a 100% seal with little to no effort.

Functionality:
The ear buds connect wirelessly through Bluetooth technology and offer full volume control through the Here app. Once the user opens the app, the software then automatically discovers and seamlessly pairs the device. Then, you are presented with a very intuitive user experience that gives you the option of lowering the decibels of the sound allowing you to prepare for an upcoming drop for a big room DJ set or lower the volume of your bickering significant sitting across the table form you. Either way, Here handles both equally well.

The app also provides to go dive deeper into the equalization of the sounds. I often times found myself lowering the bass and low-mid range but keeping the higher end sounds at a tolerable level. This allows you to still hear the vocals of your favorite song but lowering any risks of any type of hearing damage that has only been escalated with the "Loud Wars" that we are experience in the last decade of music. It also allows you to stack up to 2 filter settings such as: Reverb, Delay, Flange, Echo, etc. This allows you to create the listening experience that you want at any moment. Perhaps you want to partake in your favorite vice and add a little reverb to your world. Here gives you that option.

Doppler Labs then takes the options one step further by including 15+ presets that you are able to play with. Some of these include: Carnegie Hall, Psychedelic, Small Studio etc. These instantly conform the current music or sounds to a particular feel or environment. The buds do a great job at taking active sound and giving it a completely different mood with little to no delay. These type of filters are nothing new to users as we have been using them in studio software as well as audio playback software. But never have listeners had the option to add these effects to the live sounds that make up the world around them in. Also, included with the filters are artistic specific modes such as the Tiesto mode or the Aphex mode.

Overall, I have to say that I'm very impressed with Doppler Labs' Here ear buds and have already vowed to add them to my normal nightly music excursions. They sound great, give you complete control over the sounds around you and even come with a dope carrying/charging case that is ready for the most rugged of music festival weekends. Technology like this are part of those rare moments where you finally feel as though the "future has arrived" (as cliche as that might sound). And, as of this writing, you may actually have to wait until the future as these buds haven't quite hit the market just yet but you can head over to hereplus.me to join the waitlist and also possibly receieve a pair of free plugs by signing up.