Ask anyone spinning on 1s and 2s a few years ago and they would have had a laugh if you told them that they'd be using touch screens in the near future, but thanks to consumer product innovators like Steve Jobs the workflow of the DJ has been inadvertently revolutionized by the iPad. A line of multi touch mobiles still in its infancy, the iPad has yet to see its second birthday but it has without a doubt opened up unexplored territory for brands to expand the possibilites of the digital DJ. It was only natural for a company like Numark, whose laptop centered Midi controllers like the NS6 and NS7 have seen ample success, to step up and take the torch in leading the way of innovation. Presenting a unit that inventively accommodates the alluring ease of use of the iPad, the iDJ Pro is their first attempt at breaking the bounds of two deck mixing with Apple's touch screen technology. Slotting the iPad right at the center, Numark has become the first to utilize the tablet as not only a controller but also the grounds for organizing and calling your music collection.

The bad: Controller is tied to Algoriddim's DJ app, understandable given the limited number in the budding iPad market. Rotary knobs may be an annoyance to traditional DJs, more of a matter of personal preference.

The dealbreaker: One word, innovation. The Numark iDJ Pro is the first in its class to properly integrate the iPad into the traditional 2 deck setup. A workflow upgrade and ease of use that makes it a hit at parties with the casual music lover turned DJ or the seasoned veteran searching for a fresh perspective on A to B mixing. 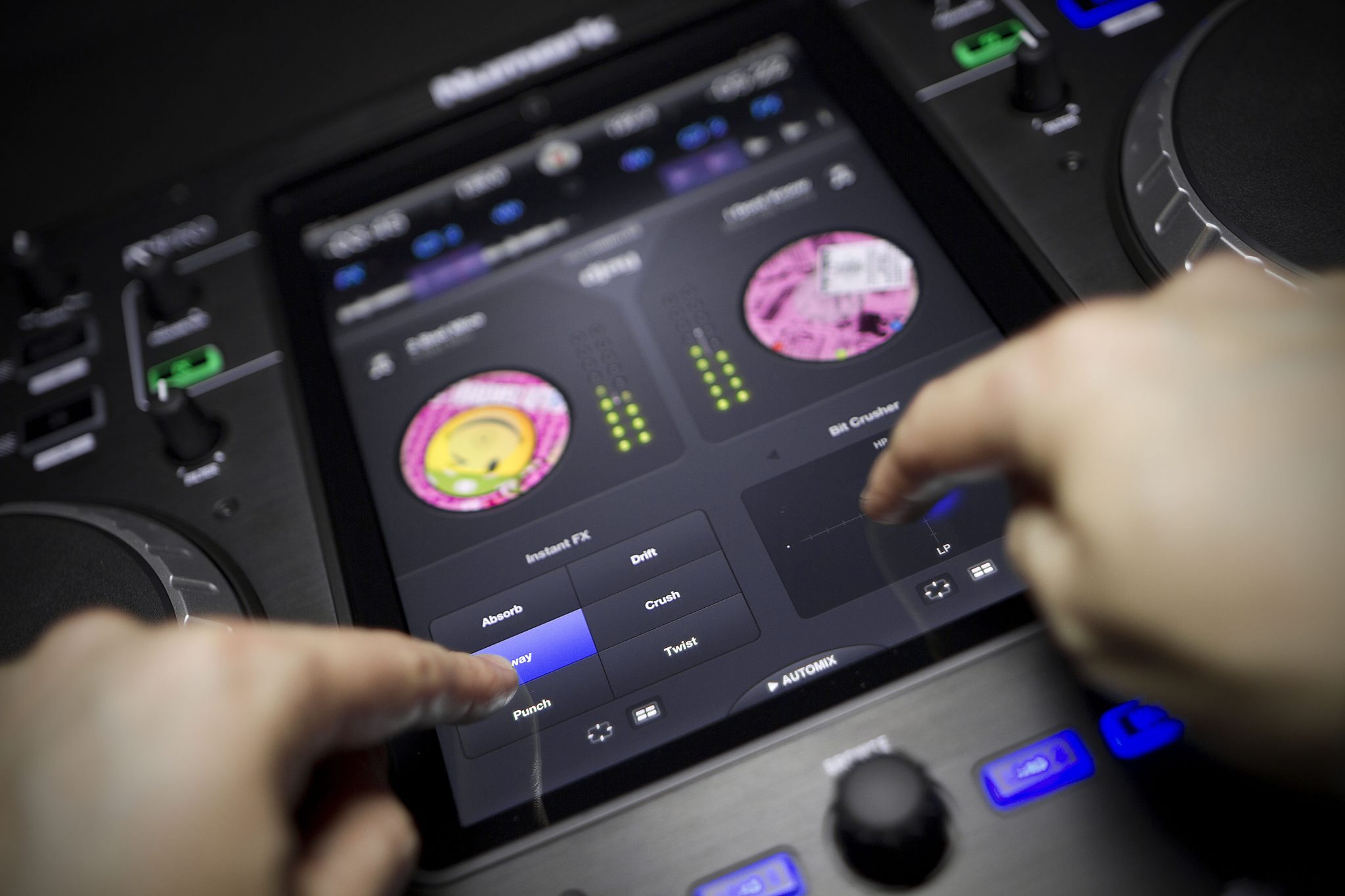 The bounds of hardware and software have been broken, Numark makes this clear from the moment you lay your hands on a unit like this. Slotting the iPad at centre stage, Algoriddim's Djay app comes redesigned to fully integrate the tangible buttons, knobs, and sliders of the iDJ Pro with touch screen controls to transform the traditional workflow into a seamless and fluent experience. Accommodating all of the current versions of the iPad, the iDJ Pro acts as a midi controller sending information through Apple's 30 pin connector while receiving audio played back from the iPad itself. Giving you nearly effortless access to call tracks straight from your iTunes library, and if you have iCloud setup,  you can work out tonight's setlist on other Apple product's like the iPhone and have them setup for your live performances. But besides comfortably housing your party playlists, what does an iPad DJ app actually do and where does it have the leg up over the laptop standards like Serato and Traktor?

An inside and out sort of answer, just one of the handful of innovative features is the drop down list of FX which can be called with a simple swipe of the finger. Five effects units cover the entire range of creative needs, embedded into the software they are Echo, Flanger, Phaser, Gate, and Bitcrusher. An XY touch pad can let you simultaneously control multiple FX parameters at once while you twiddle away with the knobs. The team at Algoriddim have also developed their own preconceived chains of effects that can lead to some very weird yet interesting results by simply applying pressure to Apple's touch screen. Couple this with being able to set loop lengths, gain levels, and zoom in on waveforms during play back and you get the crucial functions of laptop DJ software refashioned in a sleek multitouch interface. Not to mention the iDJ Pro nips Serato face in the bud, no more blank stares that make you look like you're commanding a crowd while checking your email.

On to the physical aesthetics of the unit itself, the iDJ Pro is a bit of an eye catcher as shown above. Racy blue and green LEDs light up cues, loops, and knobs while Apple's vivid retina display adds a rich polish to Numark's Algoriddim app. It's a great compromise between new and old where the mixing style may be traditional but its lasting impression comes from the futuristic after taste. This leads to the rotary volume knobs, where some adept DJs may shake their head at first, but the pretty lights and stout control makes it both easy and fun to get used as you begin to feel like you're controlling the dancefloor in a spaceship. The jog wheels are just the right size with an accurate touch sensitive response, competent for the proficient or wannabe scratch DJ.

Sturdy knobs and a brushed metal surface makes this unit a step up in hardware quality for Numark and although it's not quite the indestructible build you'll see in high end Pioneer mixers, the iDJ Pro can still withstand the gripes of the touring DJ putting it through the works from gig to gig. All in all the iDJ Pro is a renowned achievement for Numark, as the company has taken the first step in bringing the iPad and Midi controller together to distinguish themselves as a creative brand rather than the cheap alternative. The iDJ Pro is a blast, on innovation alone and if you're an aspiring DJ or casual music listener looking to break into a new hobby this unit should make you seriously consider pulling the trigger. For someone that has already played out and dabbled with all sorts of DJ gear, it's difficult to contain your excitement as Numark's visionary approach makes it hard to finish a session without a smirk on your face. As of now, there is really nothing else quite like it.