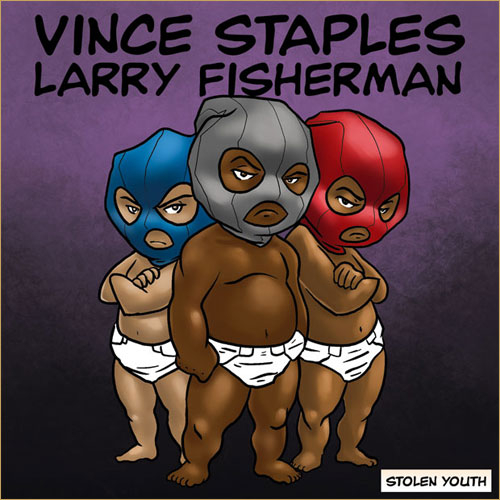 Stolen Youth is the kid brother of good kid, m.A.A.d. city; equally emotion driven, it’s not quite as polished and not as multifaceted, but it’s right on the cusp of being classic. The same indoctrinating California gang culture fuels both, but Stolen Youth plays out like a first person shooter: Vince Staples is a menace recounting his many sins with a noteworthy acuity not often seen in such visceral tales of urban warfare. He dissects both the life he was given and the one that was taken from him (and so many others) under a microscope, deftly capturing the internal struggle created by a kill-or-be-killed mentality. Stolen Youth is the story of a remorseless villain shaped by his environment.

There are few voices in rap more distinct than Vince Staples’. When he slow-flows and his pitch is at its deepest and darkest it almost sounds like the syllables in each word are tumbling through molasses. He draws some syllables out and flattens out others allowing him to manipulate cadences at his leisure. “Never had to show a lot of effort with the rap shit,” he boasts on “Outro,” and that’s exactly how it feels—he easily packs multiple rhyme schemes filled with aggressive content into 16 supercharged bars. His unique sound and proficient delivery are just the tip of the iceberg, though. Despite his content’s lack of pliability, creativity is the rapper’s greatest asset.

Honestly, the Long Beach MC couldn’t have more inventive gun bars if he was living in the Halo universe. His Beretta Scott King is strong and black as she can be. You’ll catch ‘em (shells) out the shotgun, that’s Roddy White from 50 yards. He raps with a dry wit and steely disposition that could characterize a sociopath, but just when you think he’s at his most black-hearted he displays flashes of empathy or a dark wisdom well beyond his years, causing Ab-Soul to spit, “Vince knows what I know now and I’m 26.” It takes quite a bit of ingenuity to consistently rap about the same thing and keep it fresh and interesting—Lil Wayne did it for years before quickly and suddenly fizzling out—but Vince takes it to new heights, adding new wrinkles to his consistently nefarious story via layers of context and perspective. Vince Staples is one of the few representatives of the new west that would be perfectly at home in the old one. He is America’s worst nightmare: a young, intelligent thug that understands his surroundings and cares about little else other than surviving. Stolen Youth is a testimonial of Vince’s triumph over a culture built to consume him. Out of that triumph, a star is born.

There are two stars to this show, though, and Larry Fisherman (aka Mac Miller) more than shoulders his share of load, deserving half the credit for what can only be described as an ominous sonic experience through the mind of a delinquent. His dark, abstract beats create a dense, heavy atmosphere for Vince to operate in. There is a sinister quality to each beat that, when paired with the equally sinister raps, feels almost bone chilling. Fisherman craftily uses vocal samples on songs like “Back Selling Crack,” “Killing Y’all,” and the incredibly moving “Guns & Roses” as both primary and secondary instruments. All of his drum programming is imaginative and unique, and there is an undeniable chemistry here. Michael Uzowuru is an amazing producer in his own right, but Winter In Prague doesn’t posses the same magnetism Stolen Youth does, and that can only be attributed to compatibility. Everything agrees. There are simply few missteps if any.

The project features the now typical who’s who of Larry Fisherman associates. Ab-Soul contributes two verses (one along with Da$h), TDE labelmate ScHoolBoy Q adds one, and Mac Miller himself spits some bars. Each artist contributes something of value to the project—ScHoolBoy brings street credibility, Ab-Soul brings wit, and Miller brings a welcome change of pace. Joey Fatts provides a hook, and Pittsburgh’s Hardo, a Mac Miller accomplice, provides real talk. No one delivers a show-stealing verse, and that’s for the best; Vince is the main attraction and there should be no detracting from that. Instead, each feature further builds the established narrative.

Stolen Youth is Vince Staples’ best work to date, a detail-oriented diagram of west coast street life. Every bar is convincing, each flow is fluid, and each moment is menacing to the point of generating sheer terror. There is a certain immediacy to his wordplay, bringing listeners into his dread-filled reality. The new west needs such a savage figure. Vince is the perfect segway into a new era. Stolen Youth is his formal introduction.