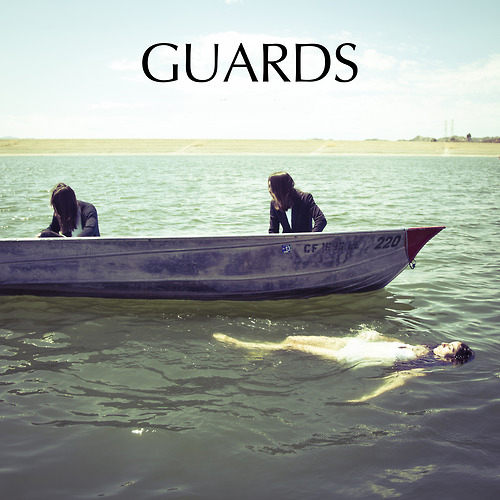 To be perfectly honest, when I first listened to Guards’ new LP In Guards We Trust (released on Black Bell Records February 5) what I immediately thought of was watching the kids from The OC as they struggled through life holed up in their McMansions. The reason for this is completely unrelated to the show, but instead related to the music that accompanied it. To the great credit of Guards (whose name I desperately don’t want to take in vain), The OC was especially well known for giving relatively unknown artists great exposure on its soundtracks, which served as epic indie mix tapes for the Death Cab for Cutie generation. Although Guards is based out of New York, In Guards We Trust has a distinctively west coast, laid back vibe that makes it easy to picture yourself casually strolling down a beach in Orange County. All sentiment for teenage television aside, this record offers great contrast both between and within each song, and achieves a great range of depth and sound on its twelve tracks.

The record opens with “Nightmare”, which beyond its heavy kick drum at the start is more like getting tangled in a hazy sea breeze than a bad dream, but no one’s complaining. My favorite track is “Heard the News”, which features deep vocal echoes and a distorted guitar riff which is a bit heavier than what can be heard on the rest of the album, making it one of the darker tracks on the roster.

If you’re the kind of person that prefers to watch your music while you listen to it, you’re in luck because Guards have already done you the kindness of releasing a video for “Silver Lining”. It has some pretty far out visuals to accompany the dreamy "live forever" lyrics on the track.

In Guards We Trust is available for purchase now. Give it a listen and tell me I’m not wrong about the OC.