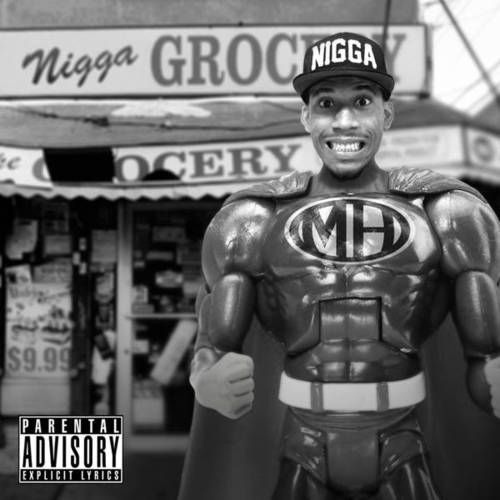 The first time I heard of Odd Future is when they performed “Sandwiches” on Late Night with Jimmy Fallon. Tyler, the Creator and Hodgy Beats stomped around stage with ski masks on and Tyler jumped a couch and nuggied Jimmy and his co-stars. I thought it was the greatest thing since The Slim Shady LP dropped. Then, gradually, I learned that the whole ‘666’ act and videos like Earl Sweatshirt’s “Earl” were a performance, not reality; Tyler claims he doesn’t even smoke pot. Alas, I had to adjust my opinion a little and learn to respect OFWGKTA more for their aesthetic expertise. After all, they were great at what they did, creating ruckus for the sake of, well, creating ruckus... even if that meant communicating to us very little about themselves. However with Untitled, Hodgy Beats’ latest 8-track EP, much of this changes. For starters, The MellowHype frontman departs from solely Left Brain production and experiments with beats by The Alchemist, Flying Lotus, Juicy J, Jonti Danimals, and Thelonious Martin. The result, a more introspective and spirited 25 minutes of music, which (of course) keeps with Hodgy’s signature rhyming style and coded lyrics. Now, I’m not going to claim to fully understand Untitled, because it is a very complex project, but from what I've gathered it is a heartfelt attempt to address those relationships that suffered because of Hodgy’s art. Which appear to be quite a few.

Untitled kicks off with the Juicy J-produced “Bullshittin’”. But before we can address that we must consider the album art. Odd Future takes great pride in producing their own multimedia. Thus, it is often in the artwork that we can decode Easter eggs in OFWGKTA's music. Take for example Untitled. On the cover is an action figure rendering of Hodgy Beats, plasticized from the toes to the neck. Hodgy’s head and face are his own, and he’s wearing a hat that reads, 'NIGGA'. The grocer in the background is called 'Nigga Grocery'. To me, there's a clear distinction here between Hodgy’s true self, his ‘nigga’ identity, and the superhuman exaggeration he dons for public appearances like Fallon. Untitled is a glimpse into the former, that is, Hodgy’s true self.

So going back to "Bullshittin'", the Juicy J-produced number, it's not surprising that Hodgy kicks things off with a frank warning. "I mean, you got to listen, because if you don't you ain't going to comprehend shit, bitch," Hodgy shit talks over Juicy J's murky bassline and sample. According to my analysis, Hodgy is speaking to a chick on this record, particularly when he raps, “I be in my chair, half the time you think I’m blown, like, what the fuck you be on, my nigga." Hodgy appears to be blowing off steam over a chick who fails to distinguish his music from his person.

Another standout record is "Cookie Coma", the jazzy The Alchemist beat with lush horns and deep upright bass. Hodgy vents about the so-called 'rap image' he adorns, rhyming, “I had a dream I wasn’t K/he slang that yay got done away/in the rectum of the hood and I ain’t sprung to say/guns don’t protect them for the good/but they fuckin’ spray/afrochines sucha bad cold dream/I’m dreamin its reality, it struggles and it battles me." Here Hodgy is confessing to a chick that the fiction of his rap brand is gradually becoming his reality, and it troubles him. Yet Hodgy acknowledges that Untitled is indeed a departure from the typical superhero rap dress-up gig, when he goes, “For once I take this shit genially, generally."

The other The Alchemist number on the EP, "In a Dream" is also probably my favorite on the EP. Hodgy becomes increasingly introspective over the repetitively haunting vocal sample and abrupt guitar chords, rapping to us (again) about a girl who falls for his music instead of his true self. He goes, “both of my eyes are closed, I roll on my clairvoyance/that’s why we make appointments, there are no disappointments/and it makes it less awkward when you smile through my avoidance/your heart speaks to your mind and rejoices/but reality had set its path, you are stuck with your choices/and none of them have to do with me/I’m empty, you are full of me”. Or in Layman's terms... Hodgy shuts his eyes and imagines what his music will sound like, he records it, a chick falls in love with what he records, then expects him to be a 1:1 reflection of his music, but he's not, and she's already made up her mind to pursue him, yet the thing she loves has nothing to do with Hodgy, because she digs the music and essentially that is not the same as him. Phew.

The final record on the album, "Higashi Loves You", seems to be the only Left Brain-produced jam on the EP, if you consider lack of production notes to mean in-house work... The record is a resigned lamentation on Hodgy's 'possessed' lifestyle, strewn over 80's inspired keys, skittering hi-hats, and a stoned aesthetic that instantly recalls MellowHype. If this final note is an indication of things to come, then we'll probably witness a return to the action figure fantasy aesthetic of MellowHype quite soon. The lyrics, “And my Nigga’s strapped, gun shot wit’ it/I’mma be a fucking legend like 2Pac and Biggie/sendin’ smoke signals to the heavens, tell the lord to come and get me," confirm this notion, as they hint that Hodgy and his friends will continue to act a fool so long as that leads to greater artistry and a greater following. After all, more than anything Hodgy Beats cherishes his art, more than chicks perhaps. Which is what he conveys on Untitled. He wants to be Biggie or Pac.

So with all that said, it will be interesting to see which direction Hodgy takes for the upcoming Mellowhype album, Numbers, which is set to be released sometime in 2012. Then there are his two solo albums, Rock/Slab and Damien, which have yet to be assigned proper release dates. I mean, if Untitled is an indication of anything, it is that Hodgy has exhausted all of his whining and frustration on Untitled - before he embarks on these more mass appeal ventures. Surely Hodgy will, for one reason or another, return to the original OF lane for The OF Tape Vol. 2; that is, the teenager who worships Satan and causes grief for their parents. That's proven on "Rella". But at least we know with Untitled that Higashi Miyagi, what Hodgy dubs himself on Twitter, is more than just an entity suffering from... say, lyrical tsunamis, and is more like a merging of two forms: Hodgy the 'nigga' and Hodgy the plastic doll. If that analogy makes no sense (along with everything else in this review) it's because Hodgy named himself after a Japanese 'pine island'.