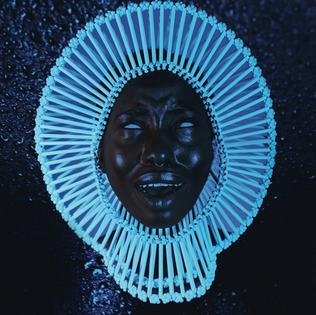 In light of the new year around the corner, I think it's safe to say when people say they're going to "glo' up in the new year" Donald Glover's 2016 is a perfect example of just what that is. Leaving 2016 with a Funkadelic bang, his rapper alter-ego, Childish Gambino, assists in his final success out of the year with his new project Awaken, My Love!. For months, the Pharos attenders who previewed the project up at Joshua Tree have known "what the Funk" was about to go down this month with the new project, but it's safe to say that Gambino has brought Funk back with a storm. It's hard to even call him a rapper with an album such as this. It's definitely Hip Hop, when considering the same movements made by his predecessor, Andre 3000, but do we even need a category to put the album in when it's satisfying to digest on it's own?

As you start the album, you are greeted with twinkling sounds, haunting voices, and a synthesizer to chill your soul on the already popularized single, "Me and Your Mama". "Prepare for a journey" is a phrase that comes to mind, but it's abruptly interrupted by the eerie gospel of voices, asking us to let him into our hearts. Are we scared? Perhaps, but this same tone of fear is not an unfamiliar one as many of us who grew up on the music genius of Parliament Funkadelic can remember the same confusion, yet were truly enticed by it. Gambino even mentioned this feeling happening while listening to funk with his father in an interview and wanted to emulate the same on this project. Its safe to say this is one album you can enjoy with your parents, especially moving into the next track, "Have Some Love", as a chorus of mixed voices sing, "Have a word for your brother/Have some time for one another/Really love one another/It's so hard to find". You can't help but think of artists such as Sly & The Family Stone or Kool & The Gang, as the people sing and Gambino shouts in the studio his ad-libs to echo. "Boogeyman", next in rotation, channels nothing but George Clinton with his eerie tones and funky bass. Pay attention to the lyrics on this one though, as he mentions notions of police brutality and racial tensions saying, "But if he's scared of me, how can we be free?". He also mentions guns being pointed at his "rising sun", this being a play on words of his newborn child, who we can assume is a boy based on another track, named "Baby Boy" on the project. Childish Gambino touches on the subject of being a brand new father plenty of times on the album, making it as well a personal manifesto.

The album starts out considerably strong, but it would be lies to say that the whole project reflects this strength. Tracks such as "Zombies" although strong musically, is brought down by the vocal structure of the song. It ends up simply sounding more like a funkier version of "The Monster Mash", than a song you can play year around. On the up side, your annual Halloween parties have gotten a lot more soulful with this one. "Riot" actually has a reverse effect being the next track. It seems as if too many instruments were included and not enough time was spent bringing out the vocals. This is a shame seeing as the lyrics for the track are evidence of Gambino reflecting on the state of the world at the moment: "Look at what's happening/World without a captain/Everyone just wants a better life". Maybe this is the point of all the confusion behind the vocals, but I wish I didn't have to look up the lyrics in order to come to these conclusions.

The whole album isn't just confusion, revolution, and protest, Gambino also shows some respect to baby makin' music heavy hitters such as The Isley Brothers and Bootsy Collins on the second single, "Redbone". As you groove to the smooth funkiness of the track, you recognize the similarities between "Redbone" and Bootsy Collins' "I'd Rather Be With You". Truly a love makin' song for the generation with less serious yet still sincere lines such as, "My peanut butter chocolate cake with Kool-Aid/I'm trying not to waste your time". "California" touches slightly on romance, speaking to a girl he likes that's moving to the sunshine state for better living, but it definitely isn't very memorable compared to the rest album or even the hit before it. "Terrified" which feels more like an outro to "Redbone" and actually feels like a misplacement since following "California", speaks on the relationships between partners and the predator like actions between lovers in some instances. Once again a sexy track for sure, although more appreciated as a outro rather than a song on it's own.

"Baby Boy", a track mentioned before, is definitely Gambino's most exposed track. He channels a lot of his character, Earnest "Earn" Marks, off of his hit show Atlanta, but this is definitely personal struggles of his own with his baby mama and their child. This rings true with him speaking on issues in his relationship and the track being a half way letter between his son and his son's mother, begging her not to take his son away for his own lies. Very relatable to many with children in the middle of a relationship, this song can hit close to home for some. This is followed by a musical representation of the night his baby mama and Gambino met, but titled "The Night Me and Your Mama Met", we can assume this is dedicated to his newborn as well. The ending of the album with "Stand Tall" imparts wisdom from Childish Gambino's parents for not only us to digest, but to hand down to his own son.

All in all, Awaken, My Love! is an exploration not only of sounds, some of which we haven't heard in decades, but also emotions that Gambino is displaying for us all. Is it a Hip Hop album? Not by any means in the tradition term, but artists such as Donald Glover have never been confined to a box in any of his efforts, so why should we start to confine him now?