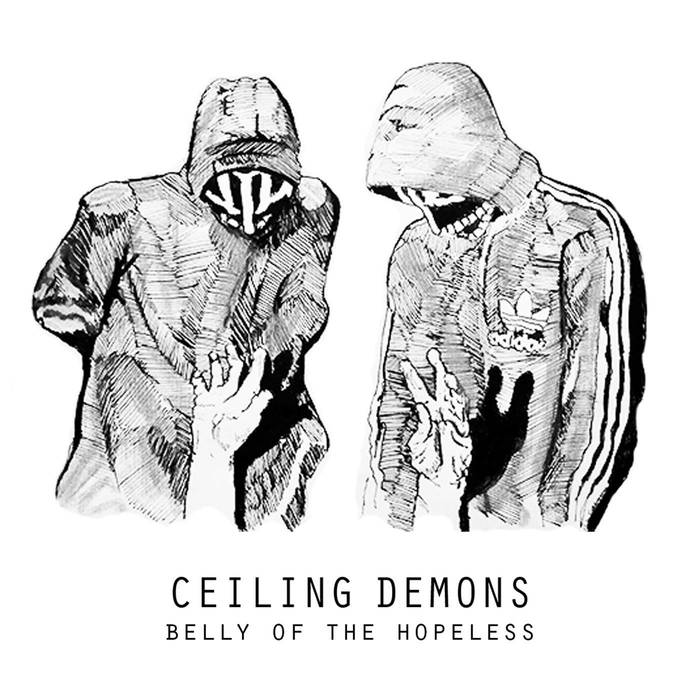 Ceiling Demons are an impressive trio originally from North England. Psy Ceiling and Dan Demon are the lead vocalists who pave the way into the unknown. Jonathan Swift from Durham produces the cosmic soundscapes. Ceiling Demons are appearing on the music scene with creative force by providing an impressive 6 track EP already that shines forth new sounds and styles. Belly of the Hopeless is officially released on Frux Tapes Records at the end of the month. Luckily for you, EARMILK has the first official listen to premiere their music in a track by track breakdown.

“Stones” is a booming introduction, which features a heavy bass and darkened string of monotone lyrics. The eerie beginning leads the listener into an alternative soundscape almost immediately, with no expectations given of where one might go yet. The music video is a psychedelic black and white stop motion animation in a manner of speaking. There is no serious progression of story, rather a visually stimulating collection of techniques and patterns.

“Will Love Return” is a slower song, that seems slightly unfitting to follow after the progression of "Belly of the Hopeless". The immediate transition seems mellow and emotionally moving the EP to a realistic attitude of life sorrows. The second half gets even darker, a ongoing trend throughout the album, where the tempo is slowed.

“Missed The Train” uses a fuzzy synth to grab your attention right from the start, which seems the most rock infused of all the tracks. The sonic waves bounce between static confusion and limitless repetition. Despite the disorientating sensation, “Tricky Kid” is definitely a crowd mover if heard live.

"Open Eyes" easily stands out on Belly of the Hopeless, as an audibly diverse single. There is an excellent balance between the experimental structure so far apparent through the EP. Around halfway however the song changes, as a novel develops, into a heated bassy finish. The lyrical content shines some light onto the overall mood of Ceiling Demons.

The last song, “Sundays”, is arguably the strongest song on the EP, as it gives wonderful transition from the sadder tune before hand. The final taste of Ceiling Demons is a sample infused stand out song that is different from everything else already. There are clear hip-hop influences showing characteristics of Mos Def or J Dilla.

Belly of the Hopeless shows a new side of Ceiling Demons, who are new to the British music scene. The EP ideally provides a new audience with a sampler taste of what the trio can do. Any new group releasing an EP needs to provide a wide range of evidence dabbling in different sounds to showcase a clarity for production. The process not only helps fans find something they like, but also gives the musicians a chance to find new styles. I found Belly of the Hopeless an outstanding thoughtful example of such a successful strategy. My only critique is that the transition between songs could have been improved, which is why the EP receives an impresive 8 out of 10.