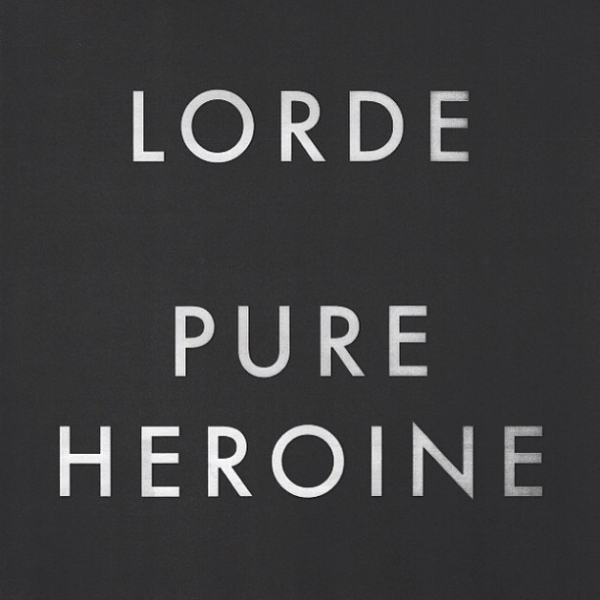 "It's a new art form showing people how little we care," Ella Yelich-O'Connor mutters mere minutes into her debut, as if to preface all future utterances emitting callous disregard or teenage naivety and nonchalance. Lorde, as she will soon be known across the globe, is in the business of not caring. It's not so much youthful aloofness as it is adolescent defiance -- she is clearly another teen product bred from boredom -- and her cynicism is rather indicative of her age. What makes the 16-year old singer-songwriter from Davenport, Auckland, New Zealand (a country just bigger than the state of Montana) so enchanting is the way she couples her bare, unblemished tone with a deliberate and decisive nature to speak for the disenfranchised millennials stuck deciphering life's meaning in 140 characters, siphoning every atom of their being from a 21st century rap culture that's been harshly saturated into a pop culture soup. Pure Heroine is blunt sonic profiling of the suburban teenage subgroup littered with stark -- but not weighty -- social commentary that seeks simply to let go, not lecture, and all it asks in return is that you do the same. Here's the most exciting part, though: it's a pop record. Sadly, it doesn't quite understand it's a pop record, and as a result it falls just short of all it seeks to achieve.

Lorde is rather obviously fascinated by social construct, and her debut is peppered with critiques of class and status. But she examines the socio-political landscape the way any teenage girl might: addressing the problems without presenting any real, tangible solutions. She never sets out to be preachy, just cognizant. It's less about telling and more about simply knowing, understanding, and comprehending -- actions birthed out of curiosity. Curiosity is heightened for the hormonal, and everything Lorde endeavors to accomplish starts and ends with defining what it's like to be young in the information age, where the ability to satisfy such insatiable curiosity is easier than ever (often to a fault). When she sings about the trappings of wealth and classism, it's not that she wants you to get it, it's more so an attempt to interpret her own feelings aloud the same way thoughts and feelings were once pondered in journals and are now plastered on Twitter, and ironically enough a lot of the issues she seeks to grasp were created or further perpetuated by Internet age bred narcissism. In essence, this is a true dot-com era album, one that is as much a product of its magic as it is of its flaws. Her debut is all about being the oldest one has ever been and the youngest they'll ever be again; it finds a comfortable medium between being restless and being well-balanced.

Clocking in at just over 37 minutes, Pure Heroine is built for the ADHD-misdiagnosed masses, and its pop charm carries a sort of universal allure that cancels out the album's harsh bite. How else can you explain "Royals'" ascent to the top of the Billboard Hot 100? For all of the song's sharp, measured analysis, it still feels like something you'd play at a middle school dance. Despite some of the album's more glum portrayals of teen culture and capitalism, it connects a lot of the same emotional dots as some of its predecessors -- most of the songs simply feel really fun. This makes the album ironic in may ways: it often seeks to critique and defy the limits of the genre it so effortlessly emulates, and in the process it undermines itself. While Lorde makes for a fantastic songwriter, her veiled approach to storytelling falls victim to the transparency of her sonics. Her lack of caring never comes across as carelessness, but if she isn't careful it may betray her core pop sensibilities. That isn't to say Pure Heroine doesn't produced some wonderfully stimulating music that, at times, successfully disregards boundaries, but it's also important not to bite the hand that feeds, and there's no denying where this album stands categorically.

Its ambition is commendable, though. It's hard in this day and age not to stand and applaud anytime a pop album takes it upon itself to step outside the realm of commercialization, especially when the music is good, and the music is most certainly good. Lorde is a rather refined talent at a rather young age, and so it's hard not to marvel at her sense of perspective. Most individuals of tax paying age probably gawk at her the way a young child might gawk at a trained chimp at the circus, and that's because it's somewhat of a rarity to see a teenage musician openly chastise consumerism on such a large platform --it's rare to see anyone stand for anything for that matter -- so, it comes as no surprise that she has been well received. Novelty always begets intrigue. Pure Heroine's risks often reap big rewards because, despite her apparent self-awareness, Lorde is still too young to understand the consequences of incorrectly navigating the politically-correct minefield that is the entertainment industry, and so she proceeds confidently into uncharted territory because...why not? She's in the business of not caring, after all. Being an unsuspecting casualty of the exploding dot-com bubble will do that to you.

"Maybe the Internet raised us," Lorde openly wonders on the album's final track, "A World Alone," and this proves to be the most insightful commentary she provides. It also proves to be the most disheartening. Perhaps, at its core, it serves as an explanation for why she cares so little; in a society where attention spans sometimes last less than the length of a blog post subtitle, how can anyone Lorde's age learn to really care about anything? Despite its identity crisis, this is Pure Heroine's most appealing attribute: the ability to transmit teenage feelings about very real things within the context of the current social climate in a way that is smart and somehow not off-putting. Teenage alcoholism, innocence, social status, self-hate, cliques, fake friends, and morality are all subjects tackled on the album (in addition to the one's already mentioned), but if you don't listen very carefully you'll miss them. In her debut, Lorde establishes herself as an early candidate for songbird of her generation.

The album's highlights include "400 Lux," which documents the science of maintaining teenage relationships highly susceptible to boredom; "Still Sane," which discusses the duality of fame and sanity; and the album's first single, "Tennis Courts," aka the blueprint for the art of not caring. Without question though, Pure Heroine's clear-cut standout is the upbeat "Buzzcut Season," which tells a very simple story about small town suburban life with such vivid imagery it places you at the scene. Lorde and her co-constructor, fellow New Zealander Joel Little, created a very consistent product that plays well from start to finish, and the electro pop influence brings an added dimension to the music. Upon a third or fourth listen, the tunes are just as catchy as they were when the sounds were fresh and unexplored, and that is the mark of, not only a great pop debut, but a solid album in general.

Lorde's Pure Heroine doesn't set out to sway you on any of the issues shaping the social climate today, but it does remind you they exist, and that's a good thing. Where the problems arise is when that awareness detracts from the fun or vice versa. If it looks like a pop album and sounds like a pop album then it is a pop album, and sabotaging that pop foundation by completely pounding its ideologies into the ground leads one to detach from the music and question its purpose. Still, in spite of that, Lorde's debut establishes her as a true player on the international stage, and sets her up from even bigger things in the future. She's in the business of not caring, but she clearly cares a lot about her craft, and if she takes great care it wont be long until she's a global phenomenon. For now though, the world -- and the web -- waits.