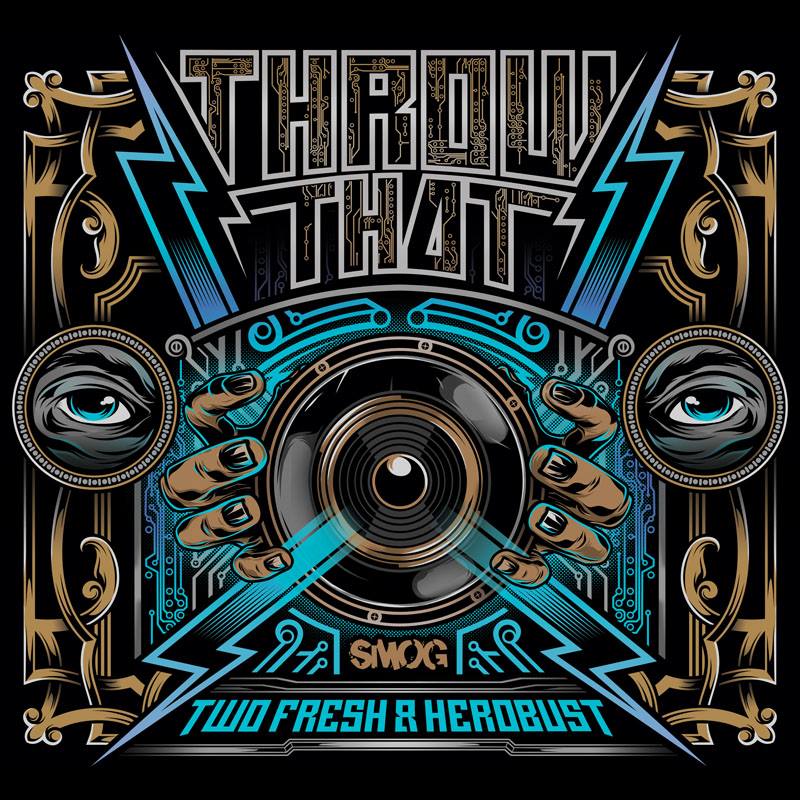 As we reach the dénouement of this year’s summer and begin to reminisce, one may be in awe at the trap genre proliferation in the United States. With the scene's explosion, came a plethora of geographical influences, genre-hybrids, and most of all, exposure. Today, however, we are honored to share with you an EP that embodies the hot southern vibes and hypnotic bass that was originally nurtured down south.

Merging talents from the genesis of trap music that is Atlanta and the black hole of heavy bass talent that is Denver, pioneering artists heRobust and Two Fresh just produced their Throw That EP, which is sure to flood dance floors and over-the-shoulder boom boxes very quickly via SMOG Records. Two weeks ago, we had our international trap jaws drop when heRobust, aka Hayden Kramer, released his busted version of Yolanda Be Cool & B Cool’s “We Speak No Americano.” We listened in awe to a sound that could sink stages, one that exemplified Hayden’s ability to appropriately mix and build rhythmic synths into an upbeat woodwind heavy dance hit. Combined with Two Fresh’s iconic taste for underground hip-hop and 90s lo-fi sounds, these mad beat scientists have yielded an EP that is, without exaggeration, crème de la crème.

The 5-track EP opens with the self-titled track “Throw That,” pummeling the listener with bass vocals and rhythmic snare into an offbeat bassline that could shake walls. The lyrical syncopation will encompass all the attention you have to offer. More importantly, this is far from your generic club scene banger. The artists’ talents shine through their discretion. The track is not overloaded with excessive buildups and awkward energy shifts. Transitions are smooth as silk despite the sound’s gravity, which I find extremely commendable. Deep, dark, and repetitive “throw that” lyrics carry an a cappella beat tone, appropriately complimenting the minimalist bass beat and high hat. Accordingly, “Throw That” has an authentic, yet mystifying street feel to it that one might normally find at a Stomp show.

Song 2—things change. “Touch” immediately takes you from the dirty southeastern streets into the heart of a dense rainforest, if a few Funktion One speakers, replaced a few coconuts, of course. A gradual crescendo opening with a beautiful seducing voice half-whispering undecipherable lyrics sets the scene. What sounds like a xylophone with interjections from a squeaky-toy prepares you for a push down a rhythmic oasis with naturesque harmony. Four minutes later you didn’t even listen to a song, but rather just finished some audible massage.

The third song, “Cirque du Solo,” will delicately place you in the front row of said circus. Don’t try to resist it, because you have no control at this point. Eye-bulging and trippy melodies fuse with old school R&B mannerisms. Falling minor scales and futuristic synths build on each other, constructing this humbly emphatic tune. I find this song elegant and bewitching at the same time. There is no writer that can do this one justice; you must listen to it for yourself.

The final two tracks are “Throw That” remixes by SPL and Swizzymack, respectfully. SPL takes the street feel and sends it through space. The tune’s original rawness is sprinkled with airy and staccato heavy breaks, giving SPL a well-earned brand of Throw That. Swizzymack marks his own territory on the EP via a strong dose of uptempo and twerk-friendly Philly-Club-style medicine. It is a nice concluding remark on an adventuresome EP through trap. Having said that, Throw That revives themes local to our hearts and history. “The three of us grew up in the southeast on dirty south vibes,” remarks Hayden, “And we all have an affinity for really creative sounds. I love this EP, it's really a reflection of all of us.” From Atlanta, to Nashville, to Denver, then the rainforest and circus. Nuts.