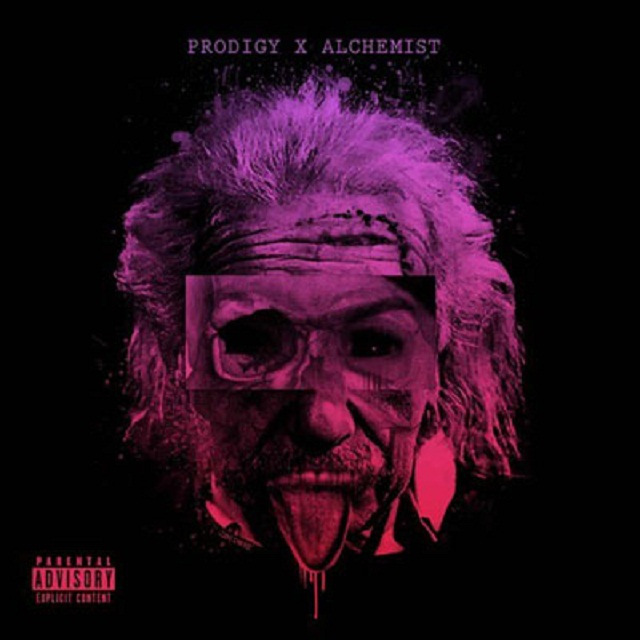 Prodigy knew Alchemist was special after listening to ten seconds of his beats. The two hip-hop artists met in the ‘90s through mutual acquaintance DJ Muggs, the Cypress Hill producer who took Alchemist under his wing. One of Mobb Deep’s affiliates recommended that Alchemist fly to New York, and almost immediately Prodigy and ALC began working on tracks. Evidence of that early chemistry not only appears on wax, but on countless video recordings of the two artists vibing.

You have to imagine Albert Einstein, the long-time collaborators' latest project, coming together much in the same way, in a smoky home studio, ALC on the boards, Prodigy with his notebook, bong on the coffee table.

Albert Einstein is a collection of 16 tracks exclusively produced by Alchemist, save for one track, “The One”, which features co-production by Adrian Younge, who just dropped his Twelve Reasons to Die project with Ghostface Killah. Lyrically, Prodigy delivers gruff braggadocio, sometimes in the form of a narrative, more often stream-of-consciousness, as the emcee explores every possible way to convince us he’s better than the competition. The rhymes are witty, slick, delivered casually, while the production is a mix of jazzy samples and real bass from a guitar. Features include Roc Marciano, Action Bronson, Domo Genesis, Havoc and Raekwon.

Singles “Give Em Hell” and “Dough Pildin” see Prodigy mouthing off at haters and detractors, while ALC loops a sample. These tracks are what you’d expect. If Prodigy’s not talking about his watch or his rhymes, it’s money and his shine. The fact that he talks slicker than most, and has a better presence on the mic, saves Prodigy from sounding bored.

More interesting records are “Breeze” and “Confessions.” “Breeze” is a jazzy number that weaves Prodigy’s overstated ego-rap with a plush vocal sample. ALC lets the sample run, where a hook might go, and Prodigy just keeps rhyming -- even when it’s hard to hear what he’s saying. Maybe it’s a metaphor for Prodigy’s unflinching rawness in an exceedingly glamorous industry, maybe not. “You can tell from my posture I don’t give a fuck,” he spits.

“Confessions” is a rare narrative number on the project. In detail, Prodigy describes two murders, one where his character pistol-whips a child after murdering her father at the school bus stop. The hook includes the witty line, “there’s six millions ways to die, I choose for you.” The beat is manic with rambling piano and ascending strings.

After making music together for two decades, Prodigy and Alchemist have settled into a nice groove, too nice perhaps. Albert Einstein is technically flawless, but focused to a fault. I chalk it up to their relationship. With artists he co-signs—like Action Bronson or Roc Marciano—ALC challenges his emcees with new sounds and eccentric directions. Whereas with Prodigy, ALC appears to give his earliest co-sign, the Mobb Deep icon, what he wants. Even if it's unconscious, Alchemist plays to Prodigy’s tune, stifling growth for old time’s sake.