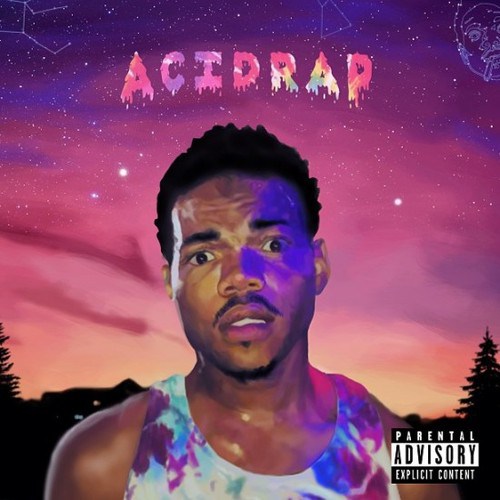 It seems like a bit of a contradiction to critique hip-hop, a genre built on the reinvention of sound, for its lack of originality; yet, it has grown into something of a cliché. In today’s 24/7 music cycle, sounds tend to blend together and it becomes very difficult to differentiate them. This further feeds the MediaFire era’s ridiculously short attention span and a “what can you do for me right now?” mentality that asks artists to overexert themselves. More and more, rappers succumb to the pressures of groupthink in an attempt to provide a product gift-wrapped to cater specifically to a sound birthed by the WorldStarHipHop comment section. At times, it seems like creativity is no longer a barometer upon which we gauge success in the genre: it is not something we particularly champion anymore.

Chance clearly has a watchful eye, and must be paying very careful attention to his contemporaries—namely Danny Brown and Action Bronson, rap’s grandest characters. On his notable debut, 10 Day, Chance was a jack-of-all-trades, doing a little bit of everything well, but not doing enough of one thing exquisitely. Upon seeing Danny’s evolution into a wacky caricature of himself following The Hybrid, taking him from a very good local name to one of the blogosphere’s biggest stars, and Bronson’s increasingly rich character development (one he perfected on Rare Chandeliers), Chance astutely settled on developing the most animated and distinct of his styles, the one that by happenstance feels the most organic.

Chance the Rapper’s latest effort, which in many ways feels like his first impression, is appropriately titled Acid Rap, deftly fitting any interpretation of the term. Yes, it does sound like music made on LSD and created for the enjoyment of recreational users of the drug—those who stare longingly at the iTunes Visualizer for hours on end—but it’s also deeper than that. Chance makes acid rap in the purest sense: music that dissolves through the typical bullshit, music that is sharply clear and discerning, and music that is piercingly intense, jarring even. Chance has officially defined his own sound, and the title serves as a tag for his newly created brand of hip-hop, one built on a fresh acoustic experience and fresh perspective.

Oh yeah, and by the way… the kid can really rap his ass off, the “rappity-rap” rap that hip-hop purists pine for. The rap that feels natural and at the same time is naturally omitted from radio DJ set lists. One contributing factor in separating the greats is the ability to fluidly convey thoughts into coherent rhyme structures, and while only time will tell whether or not Chance becomes one of them, it is very clear he has clarity down pat, perhaps surprisingly so, given his penchant for hardcore drugs.

Rapping and rapping well are two different things, and the latter has been gravely overlooked in recent years. But by the time Chance spouts, “Introducin' Chance the Ruthless / Trip 'shrooms and lucy, dreams is lucid / Loosely based on music, swallow my mucus / Hope your pussy get herpes and yo' ass get lupus / Deuces douches. Deuce deuce it shoot shit / Shoes might boot cha and a suit might suit cha / They be on bullshit but they really don't do shit / The use of illusion could confuse Confucius,” you realize a rare talent is on display here. Plenty of folks rap, but very few make it seem so effortless it feels like an afterthought.

Breaking Acid Rap down track-by-track would be doing a disservice to the complete sensory experience. It isn’t meant to be ingested as individual singles because each record represents the cognitive shift one might experience on a trip. Chance is the narrator and the guide.

At any point on the journey, you’re liable to get gripping social commentary (“They’ll be shooting whether it’s dark or not, I mean the days is pretty dark a lot / Down here it’s easier to find a gun than it is to find a fuckin’ parking spot” – Pusha Man) or damning psychological evaluations (“Damn, I’m in so deep girl, probably ‘cause you’re empty / You can’t even speak girl, damn your mouth’s so minty / Oooh your mama hate me; daddy wouldn’t let you / If he ever met me, if he ever met you” – Lost) or characterizations depicted through vivid imagery (“Spineless bitches in backless dresses” – Acid Rain).

The production, mostly handled by Nate Fox, seems like the bedrock for an auditory obelisk erected in the interest of making a permanent, unique mark, or simply the backdrop to Chance’s voice, which very obviously plays the starring role.

It is for that reason, though, that one’s enjoyment of the project hinges very heavily upon how scintillating or infuriating one finds the Chicago MCs sing-songy musings. It may take some getting used to, but any true proponent of individuality will welcome such a bold and different addition to the hip-hop ranks.

Every once in a blue moon, there’s a body of work that reminds you why you loved music so much in the first place. It’s hard to listen to Acid Rap and not venture back to a time when rap was new and exciting and, for some, forbidden—a time of discovery and a time when everything was fresh. Here’s hoping Chance the Rapper is around a long time to both generate nostalgia for the savants and, perhaps, be the source of longing for the next generation of rap neophytes.